In August 2012, researchers uncovered a lymph-like drainage system in the brain that relies on glial cells. Now, some of the same authors report in the February 22 Journal of Clinical Investigation that they can visualize this "glymphatic pathway" in rat brains by using contrast-enhanced magnetic resonance imaging. Led by Helene Benveniste of Stony Brook University in New York, the researchers hypothesize that this drainage system may help flush excess amyloid-β from the brain. Using this MRI technique to track glymphatic flow in people could predict Aβ buildup before plaques are visible, the authors suggest.

The researchers first detected this pathway using two-photon microscopy, which allowed them to map the route of fluorescent cerebrospinal fluid (CSF) tracers in the outer 400 to 500 microns of the brain (see ARF related news story and Iliff et al., 2012). They had also used conventional fluorescence microscopy to view similar dynamics in tissue taken from deeper in the brain. CSF, it turns out, traffics along specific pathways in the brain and mixes with interstitial fluid (ISF), possibly to clear toxins from the brain in the same way that lymph flushes cellular waste from the rest of the body. Although this fluid exchange is unproven to play a role in Alzheimer’s disease, that study found that fluorescently tagged Aβ courses along those same glymph channels. Aβ moved sluggishly in mice lacking a glial water channel that kept CSF flowing smoothly.

The researchers wanted to extend their microscopic view of this glymphatic pathway to the organ level, said first author Jeffrey Iliff of Oregon Health & Science University. They switched to looking at the brain with MRI. "We were able to demonstrate that the exchange pathway exists across the whole brain," Iliff told Alzforum. "More importantly, we found that it can be seen and measured by using an imaging technique that you can use in a person."

Iliff and colleagues used two gadolinium-based MRI contrast agents to trace glymphatic flow through the rat brains—the low-molecular-weight Gd-DTPA (938 Da), which is routinely used in humans, often as a CSF contrast agent, and the bulkier GadoSpin (200 kDa). They injected each into the CSF at the base of the brain and then tracked their distribution. The scientists saw that CSF flowed along the outside of arteries from the subarachnoid space at the base of the brain into the brain’s interior, where it exchanged with ISF. The ISF, carrying the MRI tracers and, presumably, brain waste, drained back out of the brain following veins. A series of large arteries run along the brain’s surface and feeds it, Iliff said. These arteries "acted like the highway for this system," he said. "Then, as side streets and arterials took off from those branches, [the CSF contrast agent] would follow it, but the major thoroughfares for fluid movement were all along these surface arteries."

Coursing adjacent to the arteries, the two markers moved at the same rate, but as they moved into neighboring brain tissue, the low-molecular-weight Gd-DTPA marker flowed more rapidly and penetrated farther than the larger GadoSpin. This pattern matches that seen in the group’s first study using fluorescence microscopy. The researchers theorize that glial cells wrapped around brain vessels restrict larger molecules from passing through. 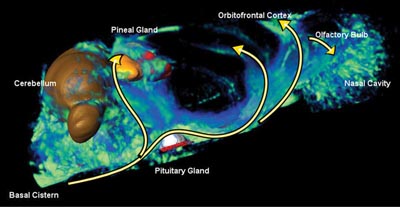 MRI captures the glymphatic pathway in the rat brain. Yellow and green show areas of the highest concentrations of the CSF contrast agent Gd-DTPA, and blue and purple show lower amounts (average of several timepoints over a four-hour scan). Arrows show route of CSF as it flows from the subarachnoid space into the brain’s interior. Image courtesy of Helene Benveniste, Stony Brook University

The re-creation of these flow patterns with different-size molecules is key to demonstrating that MRI is likely capturing the same CSF pathway previously viewed under the microscope, said John Cirrito of Washington University School of Medicine in St. Louis, Missouri. With MRI, "You’re just never going to get the kind of detail that you can get with two-photon microscopy," Cirrito said. But he noted that the researchers did "a good job showing that they can replicate many of the properties of this glymphatic system."

Could this methodology be used to study drainage of brain solutes such as Aβ in humans? MRI using a contrast agent injected into the CSF is already approved for clinical use in people with a suspected CSF leak or with hydrocephalus, where CSF accumulates and can increase pressure in the skull. Getting a peek at the human glymphatic system may not be far off, Benveniste said. She plans to conduct studies that will enroll patients already in need of these existing clinical practices and look at the glymphatic system of a human brain.

"This technique has a lot of potential to impact Alzheimer’s disease diagnostics and treatments in the future," said Tammie Benzinger, also at WashU. "Right now they would need to do human studies to compare people who have Alzheimer’s disease with those who don’t, to figure out whether this system plays a role."

It remains to be seen whether CSF flow flushes out excess Aβ or tau in a healthy brain, and whether this glymphatic system malfunctions in AD. "The relationship to amyloid deposition in humans is plausible, but hypothetical," said Clifford Jack of the Mayo Clinic in Rochester, Minnesota.

Iliff’s group is designing experiments to look at the glymphatic pathway in a mouse model of AD. He plans to image CSF flow over time as the disease progresses to determine whether the pathway is altered and, if so, how well the MRI technique predicts the onset of amyloid deposition. Ultimately, imaging CSF’s course in the brain could have great prognostic value for AD or its progression, Iliff believes. If a slowdown in the glymphatic pathway precedes amyloid or tau deposition, then that could be visible by MRI much earlier than plaques could be visualized.

Iliff sees this as analogous to amyloid imaging, but much earlier. "We’d be potentially seeing what’s going to happen, rather than what has happened," he said.—Rachel Tompa

Rachel Tompa is a science writer in Seattle, Washington.