If natural prosthesis sounds like an oxymoron, get a load of this: researchers have restored controllable wrist motion in partially paralyzed monkeys by rerouting signals from single neurons in the motor cortex, the brain area responsible for limb movement. Published online in Nature this week, the findings demonstrate that direct artificial connections between arbitrary cortical cells and muscles can bypass injured nerve pathways to produce focused movements. Though the approach is years away from the clinic, experts say it could hold promise for spinal cord injury patients.

This work differs from conventional brain-computer interfaces, which can record signals from groups of movement-related neurons, use complex formulas to decode that activity, and then convert it into signals that control a robotic arm, for instance. “Here we just take single cells and link them directly to muscle stimulation,” said Eberhard Fetz, biophysicist at the University of Washington, Seattle, who was the study’s principal investigator. “We think this could provide a much more direct pathway that a subject quickly learns to use to generate force.”

Decades ago, Fetz showed that biofeedback could train monkeys to control the firing rates of isolated cortical neurons (Fetz et al., 1973 and Fetz et al., 1975). In the new study, first author Chet Moritz and colleagues anesthetized each monkey’s forearm and applied similar conditioning techniques to neurons in the hand and wrist area of the motor cortex. They bypassed the interrupted nerve connection by wiring individual cortical cells to a computer, which translates signals exceeding a specified firing rate and relays them to paralyzed muscle cells. The monkeys took just 10 minutes to learn how to modulate the activity of randomly chosen neurons. With their brains hooked up to the cell phone-sized device, the animals channeled those cortical signals into wrist movements that could move a cursor into a larger box at the side of a computer screen (see figure below). 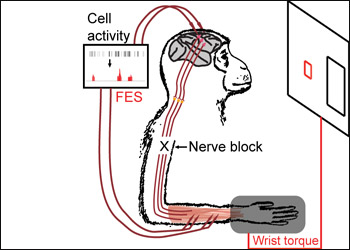 Move Over, Robotic Arms
A natural prosthesis was created by rerouting signals from individual motor cortex neurons through a computer and directly into a monkey’s paralyzed arm muscles in the form of functional electrical stimulation (FES). With this set-up, the animals learned to use randomly chosen cortical cells to move their wrists well enough to play a simple video game that involved moving a cursor into a larger box on the screen. Image Credit: Chet Moritz

In the new study, the researchers showed they could use a single neuron to drive two muscles—an important step toward restoring bidirectional movement. Flexor muscles could be controlled by high firing rates while low firing rates from the same cell could stimulate extensor muscles.

“It's really remarkable in my view that a single cell can be trained to do this to a particular muscle whether it's related to that muscle or not,” said Lorne Mendell, a neurobiologist at Stony Brook University in New York. “It speaks to the plasticity of the brain and how that could be used.”

Mendell told ARF he thinks the approach could potentially be applied to spinal cord injury patients. In a future best-case scenario, Fetz speculated that the approach could even be extended to “involve connection from one cortical site to another.” By recording activity from healthy neurons and converting it to stimuli to be delivered into brain areas that are less functional, the strategy might someday be applied in neurodegenerative contexts.

Those possibilities are, at this point, pretty pie-in-the-sky, the authors concede. For the time being, they are working to extend the approach to control more complex movements. They also plan to test an implantable computer chip, which could refine the learning process by implementing the brain-muscle connections over longer times and under different conditions. Inevitably, the researchers face a number of technical hurdles—one of them being that individual neurons eventually peter out. “Reliable recording from single cells is still a work in progress. It is not necessarily possible to maintain recordings from the same cell for long periods of time,” Fetz told ARF.

“My guess is we're looking at least 10 years before this is routinely deployed in the clinic,” he said. “But these sorts of predictions are hazardous, because technology is improving incredibly fast.”—Esther Landhuis