Scientists observe a mix of abnormally silent and overactive neurons in Alzheimer's disease brains, especially in the cortex. However, it is unclear which comes first—hyper- or hypoactivity—and why that might be. In a study reported in the May 16 Proceedings of the National Academy of Sciences USA, researchers led by Arthur Konnerth, University of Munich, Germany, removed the top layer of mouse brain to examine hippocampal activity in living transgenic mouse models of AD with two-photon microscopy. They report that the hippocampus revs up first before it quiets down, and place the blame for that altered activity on soluble Aβ oligomers.

"These data provide some of the strongest support to date for the hypothesis that Aβ species—likely soluble forms of Aβ—interfere with synaptic function in vivo and are associated with a hyperactive circuit within the hippocampus," Brad Dickerson, Massachusetts General Hospital, Charlestown, told Alzforum in an e-mail. Dickerson was not involved with the study.

To investigate the question at the cellular level, first author Marc Aurel Busche and colleagues imaged the neural activity of living APP23xPS45 mice (see Busche et al., 2008), which form amyloid plaques at about three months of age. The scientists used a relatively new technique to observe the hippocampus, a brain area that is hit early on by AD pathology. They exposed the structure for two-photon microscopy by suctioning away a small piece of the overlying cortex in live mice held in place on the microscope. Then, focusing the microscope on hippocampal neurons, they could detect transient spikes in intracellular calcium, an indirect measure of neuronal firing. "We can now identify with single-cell resolution the location of the hyperactivity," said Christine Grienberger, who was not an author on this paper but is a member of Konnerth's lab and is involved with this work.

Older, six- to seven-month-old transgenic mice—in which many plaques had already developed—had more hypo- and hyperactive neurons than did wild-type mice (see image below). But in young, one- or two-month-old amyloid-free transgenic mice, neurons were mostly overactive compared to controls. There was even a trend toward fewer silent cells. This suggested an overall boost in hyperactivity that precedes plaque formation. 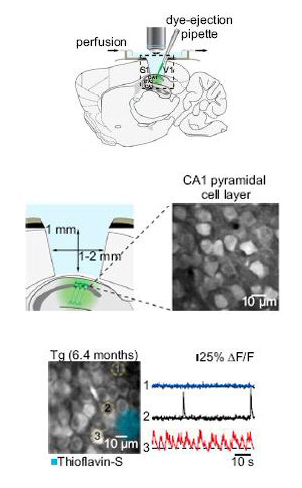 If there were no plaques, what caused the overexcitation? To investigate, the researchers treated the mice with the γ-secretase inhibitor LY-411565. After one dose, soluble and insoluble hippocampal Aβ40 and Aβ42 fell and reached a low point about five hours after treatment; at the same time, the action potentials of CA1 neurons shrank almost to control levels. In contrast, the inhibitor didn't change action potential levels in wild-type mice. These results implicate soluble Aβ in the transgenic mouse's hyperactivity, the authors suggest.

Which Aβ species could be at fault? To see if a toxic Aβ species could directly change neural activity, the researchers bathed CA1 neurons of wild-type mice in synthetic Aβ40 dimers (see ARF related news story). Activity in the CA1 region of the hippocampus immediately shot up. Those results provide a causal link between soluble Aβ and hyperactivity, the authors wrote. "The experiment suggests the dimers could be the key species, but it doesn't exclude that other species could be involved," said Grienberger. Toxic Aβ42 dimers have been found in the human brain (see ARF related news story). It is unclear how soluble Aβ caused the heightened hippocampal activity, but one theory is that it boosts synaptic glutamate in the hippocampus, the authors wrote (see also ARF related news story). It might also contribute to a domino effect, suggested Dickerson. "It would be interesting to investigate whether the hyperactivation further promotes Aβ release and possibly fibrillar accumulation in a vicious cycle," he said.

Interestingly, in one- to two-month-old mice, cortical cells in the transgenic mice were about as active as in controls, implying that this pathology hits the hippocampus first. That result jibes with another recent paper in which Grienberger and colleagues demonstrated that plaques, not soluble Aβ, disrupt tuning of neurons in the visual cortex (see Grienberger et al., 2012). "It seems the cortex and hippocampus are very different in this respect," said Grienberger. When only soluble Aβ was present in the cortex, her group saw no changes in activity. The cortex may be better able to compensate for soluble Aβ, or perhaps the hippocampal cells are just more vulnerable, but the question will need further study, she said.