Peter Lorre’s Joel Cairo in The Maltese Falcon might have gotten it right with his gardenia-scented business card. A study in today’s Science shows that wafting perfume under a person’s nose during slow-wave sleep helps the brain retain information learned during the day. The fragrant finding supports the idea that dialogue between the hippocampus and the neocortex is important for memory consolidation, a poorly understood phenomenon that is essential for laying down long-term memories. The study also hints that odor cues could help with everyday mnemonic challenges, such as remembering names and faces at scientific meetings. But before you spray that designer perfume on your pajamas, consider this: The odor has to be the same one that tickled your nostrils when you had the initial encounter—perhaps the only good argument for scented business cards. “This kind of strategy might work for healthy aged patients with minor memory impairments, but is unlikely to be very effective in AD patients or others with hippocampal damage,” suggested Jan Born, principal author on the paper, in an interview with ARF.

It is well-established that sleep helps memory consolidation, and some believe that it does so because memories from the day’s events are covertly reactivated during sleep. There is also good evidence that this reactivation involves cross-talk between the hippocampus and the neocortex. In rats, for example, hippocampal circuits activated when the animals are learning their way around a maze are reactivated in the same spatio-temporal pattern during slow-wave sleep, characterized by high-amplitude, low-frequency (To address this, Born and colleagues at the University of Luebeck, Germany, boosted neocortical slow-wave patterns electronically in humans and found that this enhanced memory. That finding appeared last November in Nature (see Marshall et al., 2006). In today’s Science, the scientists describe how they tackled the question from the opposite direction, by stimulating the hippocampus during slow-wave sleep (SWS).

First author Björn Rasch and colleagues had volunteers learn a 2D object location task (a card-sort test) while they got a blast of rose scent. Later, while they were sleeping, the volunteers were given two more shots of the fragrance at 30 second intervals. The next day all the volunteers were re-tested in the card sort test. Those who smelled the roses during the initial training and later during SWS performed significantly better, remembering the location of 97 percent of the card pairs as compared to 85 percent for those who did not receive the scent or who only got it during training or during sleep alone. “By experimentally inducing these reactivations, we can show that they are, in fact, part of a causal mechanism, that they are really necessary for memory consolidation during sleep,” said Born. 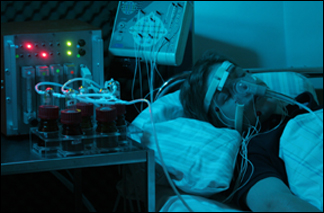 The authors chose to use olfactory cues because they have two distinct advantages over other stimuli, such as audio signals. “The first is that the olfactory system is very close to the hippocampus, so odor stimuli have a chance to directly access the hippocampus. This is supported by psychological experiments and also by everyday life experiences, which show that odors become very easily associated with experiences. The second is that the olfactory system bypasses the thalamus and all the structures in the brain that might mediate arousal,” said Born. In fact, magnetic resonance imaging of sleeping volunteers showed that the scent induced activation in the hippocampus.

In the meantime, it may behoove people to try to improve on their slow-wave sleep, which, according to Born, decreases beginning around age 40 and continuing through life. “We see in our studies that this decline is very, very closely associated with the capacity for memory consolidation during sleep, so even by age 45 people have less capability to form those memories,” said Born. One possible strategy to improve slow-wave sleep is to increase the amplitude of the circadian rhythm, which helps induce slow-wave sleep, by being more active during the waking period. “By exhausting yourself through physical and mental activity you will sleep deeper,” Born suggested.—Tom Fagan