To sleep, perchance to dream—and perhaps to tone down overworked synapses? Two Drosophila studies in the 3 April Science offer fresh support for this intriguing hypothesis, which suggests that sleep helps downscale synapses to keep them from becoming energy hogs that overtax the brain. In one study, a team led by Chiara Cirelli at the University of Wisconsin, Madison, reports that levels of key synaptic proteins rise during wakefulness and fall during slumber. The other investigation, by Paul Shaw and colleagues at Washington University in St. Louis, Missouri, found parallel trends with synapse number. These findings may tie in with Alzheimer disease, particularly with recent work showing that Aβ levels ebb and flow with synaptic activity and possibly with circadian rhythm.

As far as what the new data say about sleep, think checks and balances. “When we are awake, even when we do not realize it, we are always learning new things and adjusting to the environment. The end result is synaptic potentiation. Synapses get stronger,” Cirelli said in an interview with ARF. While great for learning and memory, beefing up all those neuronal connections may not be energetically sustainable for the long haul, Cirelli suggests (see Tononi and Cirelli, 2006). As the theory goes, getting shuteye helps reset those synapses to maintain homeostasis.

The hypothesis has drawn support from a recent study by Cirelli’s group showing that levels of certain AMPA receptors are high during wakefulness and low during sleep in rats (Vyazovskiy et al., 2008). After sleep deprivation, the rat neurons also fired more vigorously in response to stimulation—a phenomenon echoed in preliminary data from studies in people, Cirelli said. Based on those findings, she reasoned that if synaptic downregulation is in fact an important function of sleep, “it would have to be true across species.”

To test this idea, Cirelli and co-authors Giorgio Gilestro and Giulio Tononi looked in fruit flies for similar sleep-wake fluctuations in synaptic protein expression. Flies and mammals share key synaptic markers and have many sleep features in common, especially pertaining to memory and plasticity. The researchers sleep-deprived male flies—either by mechanically shaking their vials, or introducing a guest fly—for six, 12, or 24 hours. They dissected their brains and, using Western blot and confocal microscopy, found progressively higher expression of a synaptic active zone protein (Bruchpilot [BRP]), postsynaptic protein (Discs-large [DLG]), and presynaptic secretory proteins (synapsin, syntaxin, and cystein string protein [CSP]), relative to well-rested flies. The pattern did not depend on time of day and held for two other strains and same-strain females. When the sleep-deprived flies were finally allowed to slumber, synaptic protein levels decreased. These changes were widespread, appearing in most brain areas. 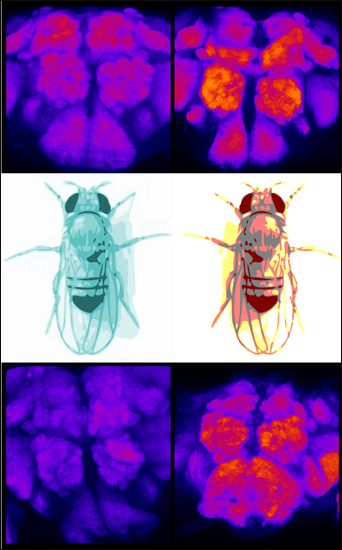 Expression of the synaptic marker Bruchpilot (BRP) is low after sleep (left) and high after sleep deprivation (right) in most regions of the fly brain. Image credit: Chiara Cirelli

In the other Drosophila study, first author Jeffrey Donlea and colleagues discovered that social experiences that induce longer, deeper sleep left flies with more synapses in the medulla. Synapse number decreased during sleep but not if the flies were kept awake, the Washington University researchers found.

Together, the two Science papers provide what could be the most compelling evidence to date for the theory that catching zzz’s provides needed rest for weary synapses. If true, the new findings could put some meat and bones on several curious observations about Aβ, the maligned peptide that fuels much of AD research.

Another line of research from the same group has revealed natural Aβ fluctuations in Tg2576 mice that seem to run in parallel with sleep-wake cycles—that is, Aβ levels fall when the mice are sleeping, and rise when they are awake (see ARF related news story). Similar patterns may occur in people. According to a recent study by Holtzman, Randy Bateman, and Washington University colleagues (Bateman et al., 2007), cerebrospinal fluid Aβ levels in healthy adults can vary as much as two- to fourfold within a 36-hour period. “The two Science papers really communicate that in sleep, there's a dramatic change in synaptic responsiveness and synapse number, and that in and of itself can affect Aβ levels,” Bateman said in an interview with ARF. “That’s what may tie all these things together.”

The situation could also be more complex. Bateman noted that sleep could change other things in addition to or besides synaptic activity. “Sleep could theoretically change lots of things, including clearance of Aβ. There could be an additive effect,” he said. But for the time being, “if there is a clear association between Aβ levels and sleep in humans,” Bateman said, “those Science papers certainly provide a possible mechanism.”—Esther Landhuis