While the occasional all-nighter to cram for exams or finish a grant proposal may seem like no big deal, losing sleep night after night could take its toll on brain health in later life, two new studies suggest. Based on microdialysis experiments in live mice, Dave Holtzman, Washington University, St. Louis, Missouri, and colleagues report that extracellular amyloid-β levels in the brain fall during slumber and rise with wakefulness. They discovered that these Aβ dynamics rely on the hormone orexin, and that forcing animals to sleep or stay awake decreases or increases Aβ plaque formation accordingly in a mouse model for Alzheimer disease. Holtzman presented some of these findings last year at the Human Amyloid Imaging meeting in Chicago (see ARF conference story). The full report was published online yesterday in Science.

Earlier work from the Holtzman lab had shown that synaptic activity triggers Aβ release (Cirrito et al., 2005 and ARF related news story), suggesting that the sleep-deprived mice in the current study churned out more Aβ because their brains were revved up longer than usual. While this is hard to prove formally, a rat electrophysiology study published in yesterday’s issue of Neuron seems to lend support for that idea. Led by Giulio Tononi at the University of Wisconsin-Madison, researchers report that neuronal firing in the brain is lower during sleep, and that the firing drops or escalates further the longer an animal has been asleep or awake. “This may tie in very much to why we see Aβ levels higher during wake and lower during sleep, and help explain why sleep deprivation is harmful not only for neuronal function but also may lead to an increase in Aβ levels and amyloid accumulation over time,” Holtzman noted in an e-mail to ARF.

Holtzman and colleagues did not start thinking about sleep from the get-go. They were trying to get a handle on Aβ pathogenesis by studying how the peptide gets metabolized in the brain. Lead author Jae-Eun Kang and coworkers had shown that stress drives up extracellular Aβ levels (Kang et al., 2007 and ARF related news story), but wondered what happens under normal conditions. Using microdialysis techniques to measure brain interstitial fluid (ISF) Aβ in Tg2576 mice, the researchers were at first puzzled to see peptide levels going up or down at various times. Upon closer observation, they discovered a pattern: over a 24-hour period, mean Aβ levels were about 25 percent lower during the day than at night. With help from sleep experts at Stanford University, Palo Alto, California, the team rigged mice with electroencephalogram (EEG) electrodes to record waking and sleeping. They found that “it wasn’t light and dark but rather how long the animals had been awake that seemed to correlate best with levels of Aβ peptide,” Holtzman told ARF. The longer the animal had been awake, the higher the ISF Aβ levels, and vice versa for amount of time spent sleeping. This pattern held in wild-type mice and in young male volunteers whose cerebrospinal fluid Aβ levels were measured by lumbar catheters (see also Bateman et al., 2007). As such, the daily Aβ changes appeared to reflect normal physiology.

The researchers then determined the effect on ISF Aβ of forcing mice to stay up past their bedtime—a regimen perhaps equally grueling to the researcher who had to stand by for six hours using a paintbrush to rouse animals on the verge of dozing. “This was no trivial study. It took three years,” Holtzman said. The tedious monitoring paid off, however, with data showing higher ISF Aβ levels during sleep deprivation (compared to peptide levels 24 hours prior) and an immediate drop in Aβ once the animals were finally allowed to sleep.

Reasoning that higher levels of ISF Aβ tend to make the peptide more likely to aggregate over time, the researchers subjected AD transgenic mice (APPswe/PS1dE9) to chronic sleep deprivation to see the effect on brain Aβ deposition. They used mice that had not yet developed amyloid pathology, and kept them awake 20 hours daily for 21 days by placing them on a special platform that sends snoozers into a pool of water. As predicted, sleep-restricted animals had greater plaque deposition in multiple cortical regions, compared to animals that slept at will. Extrapolating to humans, the data “suggest that midlife sleep abnormalities may predispose you to a neurodegenerative disease,” Holtzman told ARF.

Furthermore, the researchers determined that the daily Aβ fluctuations are regulated by orexin, a hormone that stimulates wakefulness. When the researchers gave mice six-hour brain infusions of orexin at a time they would normally be asleep, ISF Aβ was elevated relative to peptide levels measured during the same period 24 hours prior. Conversely, mice treated with a compound that blocks orexin signaling slept more and had lower Aβ levels. These findings suggest the orexin pathway as a potential target for AD prevention, Holtzman said. Sleep disturbances are common in several neurodegenerative diseases (see Gagnon et al., 2008, for review), and research suggests that improving sleep and circadian rhythm in dementia patients may also improve their cognition (Ancoli-Israel et al., 2008; Riemersma-van der Lek et al., 2008 and ARF related news story). 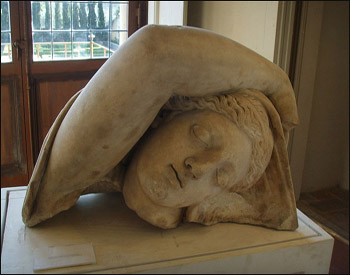 Greek mythology offers different versions of what happened during the famous sleeping episode of King Minos's daughter, the goddess Ariadne, on the island of Naxos, which artists immortalized on vases, paintings, and this Roman sculpture. Most versions have to do with rivalry between Theseus and Dionysus. But forget the guys. Maybe Ariadne was simply giving her synapses a well-deserved rest from the tiring love triangle, the better to keep her brain Aβ levels down? Image credit: Creative Commons

Those findings seem to jibe with recent work by University of Wisconsin-Madison researchers, including Tononi, who propose that sleep is needed to refresh synapses overworked from the day’s activity (Gilestro et al., 2009 and ARF related news story). In that study, the scientists tracked synaptic markers in flies, finding that these proteins rise with sleep deprivation and fall during slumber. One drawback with flies, though, is that “you cannot measure the EEG. You cannot record brain waves. And although you can record neurons, it’s much more difficult,” Vladyslav Vyazovskiy, University of Wisconsin-Madison, told ARF. “Studying mammals gives the opportunity to get many more physiological measures.”

For the Neuron paper, first author Vyazovskiy and colleagues used rats, implanting their brains with electrodes thin enough to record just a few neurons at a time. They measured several parameters of neuronal firing, including frequency, synchrony, and the relationship between firing patterns and various sleep phases. Whereas other studies had compared neuronal activity in sleep and wake states, the researchers suspected that activity levels may differ not only depending on sleep-wake state but also on how long the animal had been awake or asleep. For example, “in the morning, you wake up and you are fresh and well-rested,” Vyazovskiy said. “In the evening, you are also awake, but you are tired and sleepy.”

Vyazovskiy and colleagues found that neurons fired at progressively higher frequencies the longer the rats stayed awake, and that firing rates dropped correspondingly the longer the animals were asleep. Given that neuronal activity is “very costly in terms of energy,” Vyzovskiy said, one tenet of the so-called synaptic homeostasis hypothesis is that sleep serves to downscale synapses—to control the metabolic costs of neuronal function. “We provide new support for this hypothesis by looking at the behavior of single neurons,” he told ARF.—Esther Landhuis