Last summer's news that a mutation in the amyloid precursor protein protects carriers against Alzheimer's disease made a big splash (see ARF related news story on Jonsson et al., 2012), but, as with many genetic findings, whether the published frequency and effect of the variant, APP A673T, would hold water in diverse populations was unclear. Months later, researchers in Finland took a step toward addressing that question when they found the protective variant in a 104-year-old woman who had participated in a community cohort study. The centenarian had died without any sign of Alzheimer's pathology in her brain.

That report came from none other than a community-based longitudinal study with autopsy confirmation. The value of such projects, which are few and far between, is clear: By including all or most of a population, researchers can get a sense of the true manifestation of published genetic variants in local populations, and study how they relate to the health and aging of their carriers.

The finding from Pentti Tienari of the University of Helsinki and colleagues connects population-based data with genomewide association study data, which typically come from highly selected participants who may not be representative of the population as a whole. The result “came from an elegant study. It is important because it was the first real confirmation of the protective APP A673T mutation," said John Hardy, at University College London, U.K.

The protective mutation was first reported in July 2012 by deCODE Genetics of Reykjavik, Iceland, and their collaborators. They found that cells harboring A673T APP produced 40 percent less Aβ. The discovery corroborated the notion that Aβ accumulation drives Alzheimer’s disease, a hypothesis built upon hundreds of mutations in APP and the presenilin genes that increase Aβ production. The deCODE study flipped the story around—elderly people without Alzheimer's were five times more likely to carry the A673T variant than elderly with the disease.

That report piqued the curiosity of the researchers behind the Vantaa 85+ study, a population-based longitudinal examination of clinical and neuropathological data from older adults. Remarkably, the study enrolled nearly every very elderly citizen in Vantaa, a city of 200,000 close to Helsinki. This contrasts with many other prospective studies, which follow people who seek out, or are referred to, specialty clinics. 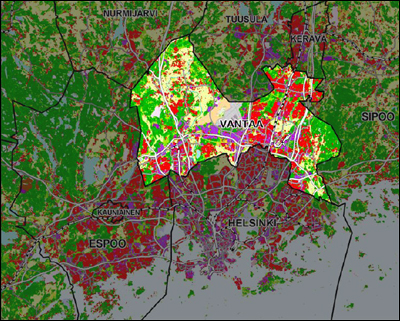 In the 1990s, nearly everyone older than 85 in the Helsinki suburb of Vantaa participated in longitudinal observation and autopsy. The Vantaa 85+ study continues to inform research today. Image courtesy of Wikimedia Commons

The original Vantaa study team, based at the University of Helsinki, reached out to all 601 people in Vantaa who were 85 or older as of 4 January 1991. The team informed local healthcare centers of the project and publicized it in local newspapers. Clinicians visited homes, hospital wards, and nursing homes to conduct interviews and examinations. Only 11 elders in the town refused to participate. Thirty-six participants died before their first clinical examination (but the researchers had access to their health and social care data); indeed, all participants have since died. In the end, 306 of the 553 participants were autopsied, a high rate compared to similar studies. Of these, the team collected formal clinical and postmortem examination for 291 participants.

Over the last 20 years, the resulting dataset has enabled researchers to link genetic mutations to clinical and neuropathological data. For example, Tuomo Polvikoski, now at Newcastle University, U.K., and colleagues reported in 1995 that people carrying ApoE4 alleles deposited greater loads of β amyloid in the cerebral cortex (see Polvikoski et al., 1995), helping to explain why this genetic variant puts people at risk for AD.

For their recent study, Polvikoski, Tienari, and others searched for the APP A673T variant in 515 members of their cohort. Brain autopsies were available for 274 of those subjects, one of whom was the 104-year-old woman, the second-oldest member of the cohort. She died soon after the project began in 1991. "That she had no signs of AD pathology on autopsy validates deCODE’s GWAS result at a brain tissue level," said coauthor Liisa Myllykangas, at the University of Helsinki, and Vantaa 85+ study member. "I think [validating at the tissue level] is the only way to confirm this kind of [genetic] finding," she added. "With genetic studies it is crucial to have these controls to get a real idea of what is going on in the whole population."

That Myllykangas and colleagues found only one instance of the mutation suggests that deCODE's reported frequency for Finns may need further study with yet more volunteers. "We were surprised that there was only one person with the variant in this population," she said. The original study on APP A673T reported that 0.5 percent of Finns carried the variant, but in the population-based Vantaa study, the frequency turned out to be 0.19 percent. As other genetics groups and population studies check their samples, a more definitive number may emerge.

"[The Vantaa APP A673T] report shows how valuable these population-based autopsy studies are," said Hannah Keage, at the University of South Australia. When findings such as the APP A673T variant "pop up in the literature, we can test to see if the results hold in the population," said Keage. Keage is a member of the Epidemiological Clinicopathological Studies in Europe. EClipSE is an effort to integrate the clinical and pathological data from three European longitudinal population studies.

Vantaa 85+ is one of the three datasets in EClipSE; the other two, based in the U.K., are the Medical Research Council's Cognitive Function and Ageing Studies (CFAS) in England and Wales, and the Cambridge City over-75s Cohort Study (CC75C). EClipSE aims to link neuropathology with clinical symptoms in broad populations, said Keage. Population-based samples are free of biases found in clinic-based studies, which typically recruit participants through advertisements or referring health professionals, said Keage, adding "[The participants] tend to have a different profile from the broader population. They are more educated, more Caucasian, more physically and mentally active, and with different life factors." Beyond EClipSE, there are only three other such studies: the Hisayama Study in Japan, the Cache County Study in Utah, and the Honolulu-Asia Aging Study (HAAS) in Hawaii (see Zaccai et al., 2006).

Getting people to sign up for these studies can be challenging. The Vantaa 85+ had near perfect enrollment and high tissue donation rates, probably in part because of cultural perspectives on participation in research. “In Finland, the general population has a very positive view of this kind of medical research and wants to participate,” said Myllykangas.

But that willingness is not shared everywhere. "Around the world, it is increasingly hard to get people involved in these population-based studies. More people refuse, in part because a lot of the studies are for people 65 and older. These days, many people at that age are still working, and these studies require a lot of time commitment," said Keage.

At risk is a complete picture of Alzheimer's disease. "We need to use these population-based studies rather than convenience-based samples in dementia research," said Claudia Kawas, a geriatric neurologist at the University of California, Irvine (see ARF Webinar). "Alzheimer's centers rely completely on volunteers and don't take every patient. If you had a stroke, or take a certain kind of medicine, [you will be excluded]. But that's what the real world is, and we are probably excluding things we should be studying," she said.

Longitudinal population studies are not alone in struggling with recruitment. Autopsy rates have fallen over the last several decades, and this loss of diagnostic verification concerns some neurodegenerative disease researchers. A 2011 report from the National Center for Health Statistics found that the number of autopsies performed in the U.S. has dropped by more than 50 percent since 1972 (see Hoyert, 2011). Countries around the world have followed suit (see Burton and Underwood, 2007).

This may cloud the research community’s understanding of the frequency and origins of Alzheimer’s and other dementias. “For genetic studies, or any kind of studies during life, it’s really important to find out what patients have at death,” said Thomas Beach of the Banner Sun Health Research Institute in Sun City, Arizona. “Basically, one in five patients diagnosed with Alzheimer’s doesn’t have it, but instead has something else. That greatly impacts the interpretation of all our studies,” he said. Beach recently argued for more support for human brain tissue research in the Journal of Alzheimer’s Research (Beach, 2013).

Rivka Ravid, who founded the Amsterdam-based company Brain Bank Consultants after working at the Netherlands Brain Bank, agrees. "The only way to validate the final diagnosis of the clinical conditions in Alzheimer's and related neurological disorders is by performing the neuropathological examination," she wrote in an e-mail to Alzforum.

Several reasons account for the decline in autopsies. They range from difficulty getting consent from donors and their next of kin to the time, staffing, and financial burdens of setting up a rapid autopsy system. Often, modern imaging techniques and biomarker analyses are presumed sufficient for diagnosis, Ravid wrote. "Some neurologists even consider postmortem validation redundant. This is a misconception," wrote Ravid. This stance has real consequences, because it is practically impossible to convince patients and next of kin to sign up as donors without their doctor’s support.

The Vantaa study’s latest finding emphasizes the benefits of brain autopsy. A critical component of the 104-year-old woman’s intriguing case was her neuropathological results. “To be without plaques and over age 100 puts you in a small minority and suggests you are protected from Alzheimer’s disease,” said Beach.

The recent Vantaa findings are encouraging, said Kawas. "It would be more encouraging if they found them in other cohorts." For that kind of confirmation, the research community might need more population-based autopsy studies around the world.—Susan Young.