On May 23, Nature News and ScienceInsider ran stories about instances of image reuse in this paper that were originally pointed out and discussed on PubPeer.

Researchers may have surmounted a decades-long biology hurdle. In the May 15 Cell online, scientists led by senior author Shoukhrat Mitalipov of Oregon Health and Science University in Portland report the first successful generation of human embryonic stem cells via somatic cell nuclear transfer. The technique, which replaces the DNA of an unfertilized egg with the nucleus from a mature cell, was previously used to clone cats, dogs, and Dolly, the famous sheep. Mitalipov and colleagues optimized it for the human ovum. The resulting human pluripotent cells possess a full suite of chromosomes and have the gene expression program needed to differentiate into any cell type, according to the authors. That opens the door for cell replacement therapy.

"The work is a stunning scientific achievement, but the direct impact on patient-specific modeling and therapies remains to be seen," commented Zhiping Pang of the Robert Wood Johnson Medical School in New Brunswick, New Jersey. Pang was not involved in the research. Since cloning was first used to make embryonic stem cells from animals, scientists have devised ways to skip the embryo stage and coax stem cells directly from mature human cells such as skin fibroblasts. "We have had years to develop techniques to work with induced pluripotent stem (iPS) cells, and it will require head-to-head comparisons to determine how these new cell lines are different, and if they are any better," Pang said.

Somatic cell nuclear transfer (SCNT) has been around since 1962, when it was first accomplished in frogs (Gurdon, 1962). Adapting the methods to mammals proved challenging, and did not happen until the 1997 cloning of Dolly (Wilmut et al., 1997). In 2004, researchers reported creating a human embryonic clone by SCNT (see ARF related news story; Hwang et al., 2004), but the work was later discredited as fraudulent (see ARF related news story).

Now, Mitalipov and colleagues, including first author Masahito Tachibana of the Oregon National Primate Research Center in Beaverton, report again that it can be done. “The data are very convincing,” Pang commented. In most previous attempts, researchers tried SCNT methods developed for non-primates, the authors note. The result was human embryos that stopped dividing at the eight-cell stage (Egli et al., 2011; Noggle et al., 2011). In this work, the authors applied a method they optimized first in rhesus macaques.

One roadblock, they suspected, had to do with premature exit from meiosis in human oocytes. Human eggs typically await fertilization in a suspended state of cell division, with their chromosomes lined up and ready to separate. However, Tachibana and colleagues recently reported that this arrest is fragile and easily altered by chemical or mechanical treatments (Tachibana et al., 2013). That creates a problem because the mid-meiosis state of the egg provides the necessary environment for reprogramming the transplanted donor DNA back to a pluripotent, embryonic state (Mitalipov et al., 2007). Tachibana and colleagues previously addressed this in macaques by using gentler methods of introducing donor DNA. They coated the nucleic acid in a viral envelope and fused it with the egg. Once the donor DNA had adjusted to its new environment, they used electroporation to induce the cells to complete meiosis (Tachibana et al., 2009). Further, they reported that a jolt of caffeine, which is a protein phosphatase inhibitor, helped macaque ova stay in meiosis until the right time (Mitalipov et al., 2007).

Having sorted out these details in macaque cells, the scientists attempted SCNT with eggs from human donors and DNA from human fetal skin cells. The treatment yielded blastocysts from which the researchers derived four stem cell lines. 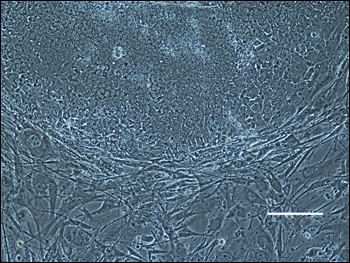 A colony of human embryonic stem cells from a blastocyst made by SCNT. Image courtesy of Cell, Tachibana et al.

The team analyzed four of the resulting lines and confirmed they genetically matched the donor skin cells. No oocyte DNA was present, with the exception of mitochondrial DNA from the egg’s cytoplasm. In addition, the karyotypes were normal, with the proper chromosome count and no misshapen chromosomes. Further, the team found that the lines were pluripotent; when injected into immunodeficient mice, they made teratomas containing all three embryonic germ layers. In addition, when the researchers cultured the cells under conditions that create heart muscle cells, the resulting cardiomyocytes beat like the real thing (see video below).

Study author Paula Amato of the Oregon Health and Science University hopes that SCNT will offer two main applications. First, in the clinic it could offer fresh young cells to supplant degenerating tissue. The lab-made stem cells would be a genetic match for the patient who donates the somatic DNA, meaning no risk of rejection. In fact, the stem cell-derived transplants might function better because they contain youthful mitochondria from the cytoplasm of the donor egg, Amato suggested. Second, SCNT provides a new way to make patient-specific disease models. As a proof of principle, the authors created a cell line from a person with Leigh syndrome, a fatal infant neurological disorder that causes problems with eating and movement.

“In general, the SCNT procedure is the ‘gold standard’ of reprogramming, and this is the new benchmark that iPS cells will have to meet,” noted Marius Wernig of Stanford University in Palo Alto, California, in an e-mail to Alzforum. Yet those iPS cells, in humans, have a seven-year head start over the SCNT technique (Takahashi and Yamanaka, 2006). Several laboratories have adopted iPS techniques to make patient-specific cell lines for a variety of conditions, Pang noted (see ARF iPS Cells series). Others have skipped the pluripotent cell step, going straight from differentiated cell type A to differentiated type B, as in the case of induced neuron (iN) cells made from human fibroblasts (see ARF related news story on Pang et al., 2011). Can SCNT offer something these other methods cannot?

Mouse cell lines made by nuclear transfer exhibit fewer chromosomal abnormalities than do iPS cells (Kim et al., 2010). It is unclear if the same pattern will hold for human cells. “The next important experiment will be to compare SCNT-ES cells with iPS cells made from the same fibroblast population,” wrote Wernig, who was not involved in the Cell paper. For example, will SCNT cells have the same genomic imprinting patterns as an embryo made the old-fashioned way? In the case of iPS cells, some genes exhibit methylation patterns unlike those of stem cells, which could interfere with gene expression. Both stem cell types are the result of highly artificial processes, Pang noted, whether it is the electroporation and caffeine treatment of SCNT or the genetic reprogramming of iPS cells.

“I do not know whether SCNT-derived ES cells will replace iPS cells, but I think they will not,” said Pang. The SCNT protocol raises both ethical and logistical complications. Many people are uncomfortable with making a human embryo in a dish, although Amato said the embryos from the new technique likely could not grow into a person, nor would an ethical scientist attempt to clone someone. In addition, Pang said, having to recruit human donors could place the technique out of reach for many labs. Collecting the materials for iPS cells—donor cells and a few genetic factors to de-differentiate them—is more straightforward. On the other hand, Mitalipov and colleagues found they could make stem cells with only a few eggs to start from, as long as they were of high quality.—Amber Dance