Pluripotent cells have been crowned one of science’s hottest topics, with the journal Science naming cell reprogramming as its Breakthrough of the Year. Scientists have used fancy genetic tricks to show that once a skin cell doesn’t have to mean always a skin cell. Nature Methods also highlighted induced pluripotency as a Method to Watch. The increasing success in directing cells to become pluripotent, and then differentiate along a desired pathway, has huge implications for biomedical research. Science’s top 10 list of breakthroughs also included faster, cheaper sequencing, which promises to accelerate genome analysis.

Cellular reprogramming research depends on the crucial discovery in 2006 that four genes were sufficient to put cells in a state of suspended differentiation (Takahashi and Yamanaka, 2006). The year 2008 saw a slew of advances in cell fate control, leading Science editor-in-chief Bruce Alberts to declare that the field “this year reached the stage where much new knowledge of both fundamental and applied significance is being harvested.”

Scientists have taken steps toward a less risky protocol for stem cell production—the original method relied on four oncogenes delivered by a virus, meaning a patient would risk cancer if the genes jumped into the wrong spot in the genome. Researchers at Massachusetts General Hospital in Boston tweaked the protocol to use non-integrating adenoviruses instead (Stadtfeld et al., 2008 and ARF related news story). Scientists at Kyoto University in Japan, led by the scientist who came up with the first protocol, managed to avoid virus involvement altogether, instead using plasmids that do not integrate with host DNA (Okita et al., 2008 and ARF related news story). Some newer protocols are also more efficient, converting 1 percent of keratinocytes into a cellular blank slate, compared to the one in 10,000 success rate of other techniques.

Stem cells, for all their promise, also generate a fair share of controversy over the use of human embryonic stem cells in research or treatments. This year researchers at University Clinic Tuebingen in Germany offered another potentially less contentious alternative when they managed to turn human testis cells into pluripotent cells (Conrad et al., 2008). Of course, for personalized medicine, only half of the population could benefit from this particular technique.

A study published this week added spinal muscular atrophy to the list of diseases in a dish, showing that when induced pluripotent cells from a patient with spinal muscular atrophy (SMA) differentiate into motor neurons, they degenerated as they do in disease. SMA is the most common genetic disorder causing childhood death, usually by age two. This research, led by Clive Svendsen at the University of Wisconsin-Madison, was published online December 21 in Nature. “It is one of the first validated disease models in a dish,” said first author Allison Ebert, also at the University of Wisconsin-Madison. “We’re seeing a disease phenotype that we can now monitor and understand better, and potentially interrupt.”

Ebert and her colleagues used skin fibroblasts from a boy with SMA, and from his mother as a wild-type control. Both cultures differentiated into motor neurons, as well as other neurons, astrocytes, a few muscle fibers, and other cell types. Staining for motor neuron markers confirmed their presence in the culture (see image below). But about a month in, the cultures from the SMA patient showed fewer, smaller neurons than the wild-type culture. The SMA motor neurons also failed to show as much punctate synapsin staining as the control cells did, suggesting another specific motor neuron deficit. Two drugs that increase expression of survival motor neuron protein (SMN), deficient in SMA cells, effectively increased SMN levels in the motor neuron culture, suggesting the culture’s potential for drug screening. 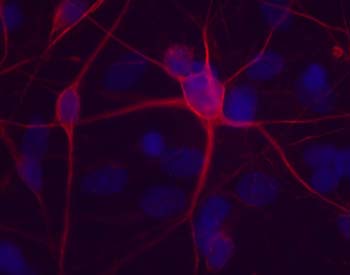 Motor Neurons from SMA Patient
Clive Svendsen and colleagues have reprogrammed fibroblasts from an SMA patient to generate induced pluripotent stem (iPS) cells, which they then directed to form motor neurons, along with several other cellular lineages. Seen here are the iPS-derived neurons stained with the motor neuron marker SBI-32 (red).

Ebert is now using the system to address why the motor neurons die—whether the cells suffer oxidative stress or mitochondrial damage, for example, as has been hypothesized for SMA. It was not really practical to address those questions in animal models of SMA, which exhibit a very artificial disease, or in patient-derived fibroblasts, which have the genotype but not the vulnerability of motor neurons, Ebert said. The technique could also be useful for ALS, another disease in which motor neurons are affected.

Also this week, two groups published in the December 26 issue of Cell a technique for isolating and culturing embryonic stem cells that they suggest may be universal for any mammal. According to the researchers, just two or three inhibitors are sufficient to stop stem cell differentiation. The teams, led by Austin Smith at the University of Cambridge in the United Kingdom and Qi-Long Ying at the University of Southern California in Los Angeles, both usher the rat into the embryonic stem cell club, which its cousin the mouse joined more than two decades ago. The rat protocol passed the test for embryonic stem cell authenticity: the cells self-renewed in culture, and when added to a growing rat embryo, they incorporated into a variety of tissues including the germline.

The year 2008 may have been the Year of the Reprogrammed Cell, but there’s plenty to keep stem cell scientists busy in 2009 and beyond. It’s still not clear exactly how stem and induced pluripotent cells wield their particular brand of omnipotential magic. And in order for stem cell techniques to be safe and effective in humans, the protocol needs to be more efficient, and oncogene- and virus-free. But the research is only gaining speed, with more breakthroughs to come.—Amber Dance