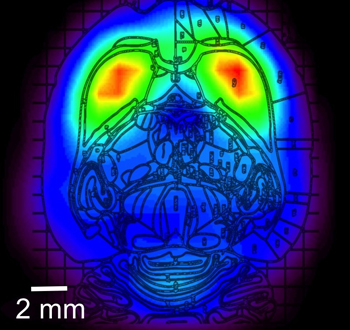 In this PET scan of a rat’s brain made with the RatCAP system, the rainbow scale (red = high, violet = low) indicates the level of radiotracer binding to dopamine receptors in the striatum. Image credit: Brookhaven National Laboratory

PET aficionados who study Alzheimer’s disease said the new technology could prove useful in animal models of motor function and learning. “The basic function of dynamic neurotransmitter systems in the presence of various amyloids or in normal aging could be studied this way, so I think this could well have an important impact in research in aging and neurodegenerative disorders,” noted Keith Johnson, Massachusetts General Hospital, Boston, in an e-mail to ARF.

Bill Jagust of the University of California, Berkeley, is excited about the possibility of scaling up the technology for human studies, to minimize the problem of subject motion during scans. Similar thoughts came to mind for Bill Klunk, who co-invented the amyloid tracer Pittsburgh Compound B (PIB) widely used for PET imaging studies of amyloid plaques in AD, and called the current study “an impressive technical tour de force.” In discussions with University of Pittsburgh colleagues, the scientists have envisioned making user-friendly “upright scanners in which our elderly subjects could sit in a chair as if under a huge, old-fashioned hair dryer,” Klunk noted. “This study suggests they don’t need to be so huge, perhaps.” Reisa Sperling of Brigham and Women’s Hospital, Boston, thinks the technology could someday be useful for tracking brain functional responses to anti-amyloid medications.—Esther Landhuis