The assembly of native proteins into structured amyloid oligomers and fibers is a key feature of many diseases, including Alzheimer’s and Parkinson’s. Now, researchers have engineered a ring-based template for coaxing a wide range of peptides into β-sheet structures. These β-sheet mimics blocked aggregation of amyloid-β, tau, α-synuclein, and other proteins in vitro, and reduced the toxicity of amyloid-β in cell cultures. James Nowick of the University of California, Irvine, and David Eisenberg of the University of California, Los Angeles, led the study, which appeared online September 9 in Nature Chemistry.

In 2000, Nowick and colleagues invented an amino acid called “Hao” with structural features that encourage Hao-containing peptides to fold into β-sheets and dimerize, but not aggregate (Nowick et al., 2002). The scientists incorporated the Hao unit into cyclic macromolecules containing a fragment of the protein tau—which forms neurofibrillary tangles in the brains of people with AD, frontotemporal dementia, and other diseases. Then they showed that this molecule inhibited aggregation of a tau-derived hexapeptide (Zheng et al., 2011). However, when applied to the Aβ protein, this approach blocked aggregation only weakly, possibly because the ring molecules, containing an Aβ pentapeptide, were too small. Now, Pin-Nan Cheng, a graduate student in the Nowick lab and co-lead author on the current study, reports on a Hao-based template with seven amino acids. Together with co-lead author Cong Liu of the Eisenberg group, Cheng and colleagues used this larger template to create β-sheet mimics (see image) that could prevent aggregation of Aβ at substoichiometric concentrations as low as 1 micromolar, and curb toxicity of the amyloid aggregates. The technique also worked for other amyloidogenic proteins such as tau, α-synuclein, islet amyloid polypeptide associated with type 2 diabetes, and β-2-microglobulin associated with dialysis-resistant amyloidosis, when fragments of those proteins were incorporated into the ring structure (see figure below). 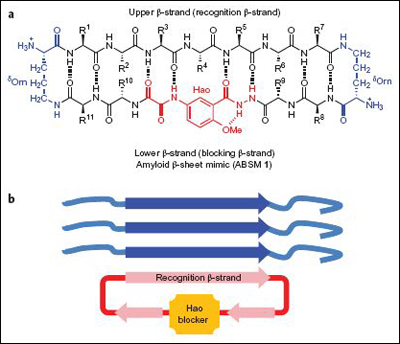 The authors only tested the blockers in vitro. “Eventually, I think we will get molecules like this into animal models,” Nowick told Alzforum. “Right now we’re interested in learning how these molecules interact with each other and with aggregating proteins, and what they can teach us about the oligomers that form from these proteins. [This study] is a big step toward having something more universal that allows us to block many different aggregating peptides and proteins.”

Whether such molecules could prove to be good drugs remains to be seen. Researchers previously tried Aβ aggregation blockers in clinical trials, to little effect. Scyllo-inositol (aka ELND005), a plant sugar alcohol that blocks Aβ oligomerization, curbs cognitive decline in AD transgenic mice (ARF related news story on McLaurin et al., 2006), but did not improve cognition or function in a Phase 2 trial of 351 people with mild to moderate AD (see ARF related news story). Alzhemed (aka tramiprosate), another Aβ aggregation inhibitor, showed some promise in Phase 2 but failed to show clinical efficacy in a Phase 3 AD trial (see ARF related news story).—Esther Landhuis