Mouse models and biochemical studies have implicated protein phosphatase 2A (PP2A) in curbing tau hyperphosphorylation in Alzheimer’s and other diseases, but brain slices and Western blots can only reveal so much. They cannot, for instance, tell us just how this heterotrimeric enzyme specifically gloms onto tau to wrestle away those potentially harmful phosphate groups. For a closer look at the molecular mechanisms driving PP2A-tau interactions, check out the current issue of Molecular Cell. There, a set of structure-function studies by Yigong Shi of Tsinghua University, Beijing, and colleagues, unveils a first-ever three-dimensional structure for the AD-relevant form of PP2A and sheds new light on how it recognizes and dephosphorylates tau.

PP2A, a serine/threonine phosphatase, plays a key role in many aspects of cell physiology, including proliferation and development. A handful of studies (see, e.g., Gong et al., 2000 and Kins et al., 2001) have expanded the list of PP2A substrates to include the protein tau. Naturally, this has piqued the interest of AD researchers because hyperphosphorylation makes tau prone to form neurofibrillary tangles—one of two pathologies that characterize the disease—and figuring out how to tone down this process could lead to new therapeutic strategies.

Designing drugs to enhance PP2A-tau activity calls for some basic understanding of how these proteins assemble and interact at the molecular level. Toward this end, nearly a dozen publications in the past two years have provided structural insight into PP2A and related proteins, but none specifically looked at the regulatory subunit of PP2A that facilitates tau dephosphorylation. PP2A consists of scaffold (aka “A”) and catalytic (aka “C”) subunits, as well as a variable subunit from one of four families—B, B’, B’’, or B’’’. Among these, the B (or B55/PR55) subunits appear to be the ones responsible for PP2A-mediated dephosphorylation of tau (Drewes et al., 1993; Gong et al., 1994).

In the new study, a research team led by Shi—formerly at Princeton University, New Jersey, and now at his alma mater (Tsinghua University) in Beijing—presents the first crystal structure of PP2A with the Bα regulatory subunit. Getting the Bα-containing PP2A holoenzyme to crystallize was “a gigantic effort,” wrote Yu (Julie) Chen, one of the study’s lead authors, in an e-mail to ARF.

If a picture is said to be worth a thousand words, fellow structural biologists will appreciate that this one resulted from an extensive screen for crystallization conditions requiring more than 150,000 hanging drops. (Baffled? See primer on protein crystallization techniques.) When all conditions had finally been tweaked appropriately, the researchers marveled at Bα in full 3D glory—as a seven-bladed β propeller that grabs the arch-shaped scaffold “A” subunit with its β hairpin arm and lures tau into its central substrate-binding groove. 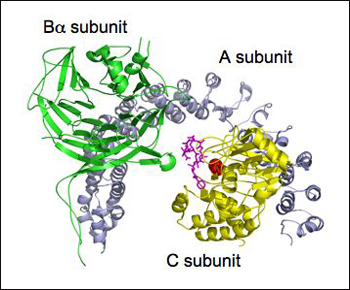 Ready for Take-off
Protein crystallization experiments reveal PP2A’s Bα subunit as a seven-bladed propeller (green) that latches onto the ridge of the A subunit (grey) through a β hairpin arm. The catalytic center of the C subunit (yellow) contains manganese ions (red) and is stabilized by a PP2A inhibitor, microcystin-LR (magenta). Image Credit: Yu (Julie) Chen

Guided by this structural information, Chen, co-lead author Yanhui Xu, and colleagues used an in vitro phospho-tau dephosphorylation assay to probe the finer details of PP2A-tau interactions. For the basic assay, the team purified recombinant human tau protein from bacteria, phosphorylated it using the protein kinase GSK-3β, isolated the resultant phospho-tau by gel filtration, and dephosphorylated it using recombinant PP2A complexes. By testing PP2A complexes assembled from seven different Bα mutants, the researchers mapped the tau binding site to the central groove of Bα’s top face and identified a cluster of amino acids on one side of the groove that seem critical for binding. They also generated and purified 18 overlapping tau fragments and put them through two different binding assays (non-denaturing PAGE and gel filtration) to map Bα-binding sequences. These experiments identified two non-overlapping tau peptides with putative Bα-binding elements, each falling within the protein’s microtubule-binding repeats.—Esther Landhuis