Functional neuroimaging studies show elevated activation in the brains of patients with mild cognitive impairment (MCI), which could be taken to mean that neurons are putting out that extra bit of effort in the face of increasing pathology. But a different interpretation is offered in the November 23 Journal of Neuroscience. Researchers led by William Klunk at the University of Pittsburgh, Pennsylvania, examined correlations between amyloid-β levels and glucose uptake, and they conclude that naturally higher metabolism protects the brain against the cognitive consequences of Aβ toxicity in MCI. The work seems to support the idea that higher metabolism is not necessarily indicative of compensation, but rather of greater cognitive or brain reserve.

In contrast, the researchers unexpectedly found many areas of such positive correlation in MCI patients. The most extensive local associations were in frontal areas, including the bilateral anterior cingulate cortex and the left frontal cortex. Metabolism in the anterior cingulate correlated with PIB binding in many distant brain regions, as well. Klunk told ARF that at first he found these correlations hard to believe, but after going back through and re-analyzing the data from scratch, concluded that they were real.

One possible explanation for these positive correlations is that the brain is trying to compensate for amyloid toxicity, as has been predicted by other studies (see ARF related news story). “If MCI patients are increasing metabolism as amyloid increases, and since the amyloid is greatly increased in these MCI patients compared to controls, then you would have to deduce that their metabolism should be increased compared to the controls,” said Klunk. But it is not. The researchers found no difference in absolute glucose metabolism, on average, between MCI patients and controls.

Then what explains the positive correlations between PIB binding and metabolism in MCI patients? Klunk and colleagues believe it is a result of a range of metabolic rates that exist in cognitively normal people to begin with. People with higher metabolic rate withstand more Aβ before they succumb to MCI, and then AD, than those with lower metabolic rates, who need relatively less Aβ to become cognitively impaired. Looking only at MCI patients, then, researchers see a positive relationship between metabolism and PIB binding. “What we are observing is a tangible example of brain reserve,” said Klunk “The people who started with high metabolism will need more amyloid to drive them into MCI.” The hypothesis may help explain why people with higher brain reserve/metabolism, such as those with higher education, are generally protected from cognitive decline (see ARF related news story). 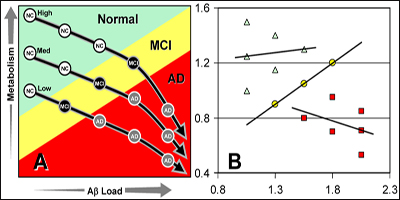 MCI and Cognitive Reserve (View larger image)
Correlations between PIB binding (Aβ load) and metabolism in MCI may be due to differences in basal metabolic rate among individuals. Those with higher brain metabolism need more Aβ to become cognitively impaired (A). This gives the impression that MCI patients with higher Aβ have higher metabolism (B). Image credit: The Society for Neuroscience. All rights reserved. Photography by William Klunk.

The importance of this finding may lie in the possibility that basal metabolism is not solely determined by genes, but may also be linked to a variety of risk factors that accumulate over the course of decades. Some of these may be controllable. One factor that is tightly associated with brain metabolism is blood flow, according to Klunk, who suggested that one cause of relatively low basal metabolism could be subclinical vascular disease. “A heart-healthy lifestyle may be as good for the brain as it is for the circulatory system,” said Klunk. This imaging data may add a fresh layer of evidence for this oft-heard piece public health advice. —Tom Fagan