Sending needle-thin microscopes deep into the brain to image individual neurons is no small feat. But in a Nature Medicine paper posted online January 16, researchers describe a method for capturing time-lapse video of neurons in mouse disease models over a period of months. Rather than plunging optical probes into the brain again and again, injuring it each time, the scientists snake the lenses through tiny guide tubes implanted into the animal’s brain prior to the start of imaging. “Previous studies have essentially looked at snapshots in time,” said lead investigator Mark Schnitzer of Stanford University, Palo Alto, California. “Now, not only can you come back to the same animals and visualize the same cells, but you can go to the same dendrites within a cell and track structural changes over several months.”

And in a study published online January 9 in Nature Methods, researchers at the University of California, Los Angeles, unveil another microscopy advance—this one focusing not on structure, but activity, of individual neurons. Using multiple lasers to record neuronal firing simultaneously from several vantage points, Carlos Portera-Cailliau, Katsushi Arisaka, and colleagues are pushing the limits of two-photon calcium imaging, enabling more cells to be analyzed more quickly. Together, the new developments provide scientists with more sophisticated tools for studying long-term changes in neuronal structure and activity in animal models of brain disease.

Recent advances in multiphoton microscopy have enabled researchers to peer into the brains of mice and watch key events—for example, the growth of amyloid plaques in Alzheimer’s disease models—in real time (see ARF related news story). In AD research, these methods provide stunning views of the upper neocortical areas within a few hundred microns of the brain’s surface—it is too dark to see anything farther below. To probe deeper areas, such as the hippocampus, the Schnitzer lab fashioned tiny endoscopes into “optical needles” long enough to penetrate, in principle, anywhere in the brain (Jung et al., 2003; Jung et al., 2004). However, analysis of long-term changes in these deep areas, such as during disease progression, would need more than the few snapshots afforded by conventional endoscopy.

In the current study, first authors Robert Barretto, Tony Ko, and Juergen Jung tweaked the approach for time-lapse imaging. Facing a fundamental problem—how to get the optical instruments into deep brain areas repeatedly with minimal harm—they came up with a clever solution. Instead of poking the micro-endoscopes directly into the tissue, they first implanted guide tubes, that are sealed at the bottom with coverslips, into each hemisphere of the mouse’s brain. “It’s as if there’s a tiny window to the brain at the back end of the guide tube,” Schnitzer said. The Stanford team could then insert the millimeter-wide endoscopes through the guide tubes, again and again, to monitor changes in the surrounding cells over time.

Analyzing mice that express fluorescent proteins in some hippocampal cells, Schnitzer and colleagues used the new set-up to track changes in dendritic branching of individual CA1 neurons in live mice. Across 33,596 observations from images of 4,257 dendrites collected over seven weeks, dendrites were found to be exceedingly stable.

The researchers then took their approach into a disease study, monitoring tumor growth in mice with guide tubes surgically implanted in both brain hemispheres. In each animal, one side of the brain was injected with glioma cells, the other left alone as a control. By injecting a fluorescent dye into the vasculature, the scientists generated three-dimensional images of surrounding blood vessels (see below). They found that blood flow slowed, despite widening of vessels, with advancing glioma, showing the technique could be used to study brain disease. 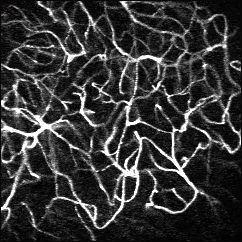 “This is lovely technology with promise for future important biological studies,” wrote Brad Hyman, who does in vivo brain imaging in AD mice at Massachusetts General Hospital, Charlestown. The paper describes “one of a series of technical improvements in multiphoton microscopy that allow deep imaging for use of awake, behaving animals,” he noted in an e-mail to ARF (see full comment below).

While conventional two-photon microscopy can track formation and growth of Aβ plaques in outer neocortical layers of AD mice, the new endoscopy approach would be useful for imaging tau pathology, as tau is more abundant deep in the brain, said Bettina Wegenast-Braun of the University of Tübingen in Germany. Wegenast-Braun was co-first author on a recent multiphoton imaging study that monitored plaque growth in AD mice for a record six months (Hefendehl et al., 2011 and ARF related news story).

On the downside, like other methods that involve placing foreign objects into the brain, glial activation was seen around the microendoscopy guide tubes. However, the authors assert that the minor gliosis at these sites neither caused loss of nearby neurons nor obstructed imaging beyond those cells. “The main implication is that microendoscopy studies of disease must control for the potential side effects of guide tube implantation to separate them from the effects of disease,” they write. The present study did this by injecting glioma cells into just one side of the brain. However, this sort of bilateral analysis is not always feasible, Wegenast-Braun noted.

Another sticking point with optical needles is their small field of view. In the Stanford study, the instruments were at most 1 mm wide, compared to the 4-mm cranial incisions used for conventional two-photon imaging. The broader cranial windows also provide opportunities to image using different lenses, and offer higher resolution, Wegenast-Braun said.

Guoping Feng of the Massachusetts Institute of Technology also brought up the issue of resolution. Though the current endoscopy study achieved good resolution for dendrites, “in AD, most changes occur at the level of spines,” Feng said. “Improving the resolution to image spines would be really useful.”

In the Nature Methods paper, first authors Adrian Cheng and Tiago Goncalves, and colleagues took a different tack toward this goal. Working with UCLA physicist Katsushi Arisaka, the researchers expanded the capacity of conventional two-photon calcium imaging to more quickly record the firing of thousands of neurons at once.

Multiphoton calcium imaging is a powerful method for visualizing individual cells while simultaneously recording their activity. However, the technique has limitations when used in the brain. “The light penetrates the tissue well, but the fluorescence you get back is completely scattered,” Goncalves said in an interview with ARF. “Even if you’re exciting just one GFP molecule at a certain depth, let’s say 250 microns, what you get back is something a lot bigger. It’s like looking at an image through frosted glass.” The signal-fading problem has stymied efforts to boost imaging speed, but the UCLA researchers devised a way to do this by recording from four different-colored laser beams simultaneously.

The trick was to separate each beam with a four-nanosecond delay. This timescale is “fairly irrelevant for biological processes, but allowed us to collect the fluorescence coming from one beam before measuring the signal from the next beam,” Goncalves said. Using the new method, the researchers were able to record neurons four times faster than previously possible with two-photon imaging. (See videos for examples of recordings made with the new microscope.)

Better yet, the technology had greater depth of field, enabling “simultaneous imaging of a three-dimensional volume of brain without having to scan in the z-direction, so you can image more cells in less time,” said Brian Bacskai, an AD researcher at Massachusetts General Hospital, Boston. “That’s a good thing, especially if you want to observe larger networks of neurons during complex activities.” In a recent study, Bacskai’s lab used multiphoton imaging to reveal calcium dysregulation in astrocytes of AD transgenic mice (Kuchibhotla et al., 2009 and ARF related news story).

Charles Stevens of the Salk Institute for Biological Studies, La Jolla, California, pointed out that while the advance increases imaging speed, it does not improve the depth at which two-photon imaging can be done. “Furthermore, although the fourfold speed increase is impressive, something like a 10-fold increase—or 100-fold—is what you really would want,” Stevens wrote in an e-mail to ARF. “So this is a wonderful technological achievement that will be important, but it is not a 'game-changer'.” (See full comment below.) Nevertheless, Stevens called the new technology “a technological tour de force” that allows researchers to “look over a larger volume of tissue with better temporal resolution.”—Esther Landhuis