Widely known for their pivotal role in producing the amyloid-β peptides regarded as pathological hallmarks of Alzheimer disease, presenilins may now have a new claim to fame. A paper in the 30 June issue of the Journal of Cell Biology suggests that these membrane proteins help maintain neuronal health by regulating the activity of a key calcium pump in the endoplasmic reticulum. In a rare study addressing the physiological function of presenilins, Frank LaFerla and colleagues at the University of California, Irvine, show that presenilins physically associate with and activate sarco-endoplasmic reticulum Ca2+-ATPase (SERCA) pump proteins, and that turning SERCA activity up or down leads to a corresponding rise or drop in Aβ generation. Despite ongoing quibbles over how to interpret a growing number of calcium-AD studies performed in different, non-neuronal cell types, the scientists and others seem to agree on this much: these data—along with those from studies published last month—solidify the idea that neuronal calcium mismanagement can exacerbate AD pathology.

Previous studies have shown that presenilin 1 (PS1) and 2 (PS2) mutations linked to early onset familial AD (FAD) muddle intracellular calcium signaling. An emerging consensus pinpoints the dysfunction to enhanced calcium release from the ER. Just how these disruptions arise remains a subject of debate, but some clues have surfaced. Work published last month (Cheung et al., 2008) suggests that rogue presenilins do their dirty work in the ER by interacting with the inositol 1,4,5-trisphosphate receptor (InsP3R) calcium release channel. These interactions rev up ER calcium outflow, which is linked to enhanced Aβ production, the authors reported (see ARF related news story). Their proposed mechanism for calcium dysregulation appears to differ from that of an earlier study (Tu et al., 2006 and ARF related news story) suggesting that exaggerated calcium signaling induced by mutant PS comes not from enhanced release but rather from overloaded stores of calcium within the ER. Those data suggested that presenilins form ER leak channels, and that FAD-linked PS mutations upset this function, causing the ER to retain whopping amounts of calcium. “People argue about some of the details, but every mutation that has been linked to FAD affects calcium signaling,” said LaFerla. “Where our study differs somewhat from other recent studies is that we did not focus on mutant presenilin. We were looking at an endogenous role for presenilin.”

Given these and other studies implicating InsP3R and ER leak channels in PS-mediated calcium disturbances, LaFerla and colleagues wondered about the primary mover of ER calcium—the SERCA pump, which pushes calcium from the cytosol into the ER, against its gradient. Might PS regulate SERCA function as well? To address this question, co-lead author Kim Green measured cytosolic calcium in wild-type and PS1/PS2 double-knockout mouse fibroblasts (Herreman et al., 1999) before and during stimulation with the potent SERCA pump inhibitor thapsigargin. Sure enough, Green found that the PS double-knockout fibroblasts showed increased resting cytosolic calcium levels and blunted responses to thapsigargin relative to control cells, suggesting that presenilins have a hand in stimulating SERCA activity. Similar experiments in PS1- and PS2-deficient cells suggested that both PS proteins regulate calcium homeostasis but that PS2 seems to play a larger role.

Surprisingly, Green and colleagues found higher levels of SERCA2b protein (the isoform found in brain neurons) in the PS double-knockout cells as compared with wild-type fibroblasts, which would seem counterintuitive if presenilins activate SERCA function. But the authors reasoned that the PS-deficient cells might be compensating for their impaired SERCA activity by upregulating SERCA expression.

Small interfering RNA (siRNA)-mediated knockdown of SERCA2b in Chinese hamster ovary (CHO) cells boosted basal cytosolic calcium and significantly decreased thapsigargin-induced ER calcium release, the researchers found. Noting this phenotype was “remarkably similar” to what they had observed in the PS double-knockout cells, the authors write that the siRNA data give “further credence to presenilin regulation of SERCA function.”

Co-first author Angelo Demuro reproduced the PS-null fibroblast findings in Xenopus oocytes transfected with PS1, PS2, or SERCA2b. All cells were also engineered to express calcium-permeable nicotinic acetylcholine receptors, through which the researchers sent regulated calcium pulses into the cell. They measured SERCA activity by the rate at which calcium was cleared from the cytoplasm. Based on the kinetics of calcium clearance, the authors confirmed PS2’s greater role in regulating ER calcium stores, compared to PS1. They also expressed an FAD mutant PS1 (M146V) in Xenopus and showed that it accelerated cytosolic calcium clearance even faster than did wild-type PS1.

In wild-type fibroblasts, the researchers demonstrated colocalization of SERCA2b and PS proteins—more prevalent for PS2 than PS1—by confocal microscopy (see image below). Importantly, they also showed that PS proteins and SERCA2b directly interact by detecting SERCA2b in anti-PS1 and -PS2 immunoprecipitates of cell lysates. 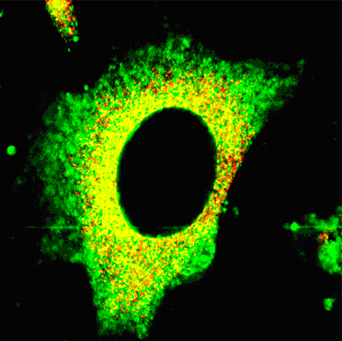 To establish if there is an AD connection to this PS activity, the researchers measured Aβ production by APP-expressing CHO cells in which SERCA2b activity was boosted (by overexpression) or shut down (by either siRNA knockdown or thapsigargin treatment). They found increased Aβ40 production in SERCA2b-overexpressing cells and lower Aβ40 and Aβ42 in siRNA- and thapsigargin-treated cells.

“The bottom line is that presenilin, in either its wild-type or mutant form, affected calcium homeostasis in a profound manner, suggesting that presenilin is itself an important calcium regulator, in addition to its function as a γ-secretase,” wrote Green in an e-mail to ARF.

Some scientists have expressed caution with regard to interpreting these findings. "Whereas the data are suggestive that PS can modulate the kinetics of SERCA, because the experiments aren't looking at SERCA pump activity directly, it leaves open some of the interpretations,” said Kevin Foskett of the University of Pennsylvania, Philadelphia, in a phone interview. Foskett led the recent study suggesting that mutant PS proteins modulate ER calcium outflow by interacting with InsP3R calcium channels (see ARF related news story). Considering that InsP3R releases the calcium that the SERCA pump puts into the ER, he said “it's logical to think that maybe there's a tripartite interaction with the presenilins at the heart of the major molecules regulating calcium flux in the ER membrane.”

Philip Landfield of the University of Kentucky College of Medicine in Lexington notes that a wide variety of specific cellular mechanisms have been reported to be sensitive to presenilins and AD-related mutations. “This diversity raises the question of whether all of these actions reflect physiologically relevant effects on calcium regulation or whether instead the differences might reflect interactions with the varied cell types and experimental conditions employed,” he wrote in an e-mail to ARF. See full comment below.

In line with these remarks, Beth (aka Grace) Stutzmann of Rosalind Franklin University in North Chicago, Illinois, pointed out in an Alzforum phone interview why calcium studies in neurons can be especially tricky. “Neurons in particular are extremely fussy about their calcium regulation. They use it in different compartments for different things. They're electrogenic,” said Stutzmann, a former postdoc of LaFerla and co-author Ian Parker, at UC Irvine. “Other cells don't need to carry action potentials. Neurons recruit and monitor calcium very carefully and very differently.”

Perhaps stemming from these unique features, recent studies linking presenilins with calcium dysregulation in neurons may “look quite disjointed and at times even contradictory to each other,” noted Ilya Bezprozvanny of the University of Texas Southwestern Medical Center, Dallas, in an e-mail to ARF. “However, I think the main take-home message is that calcium signaling does in fact play an important role in AD, and we just have to figure out exactly how these pathways are connected to each other and to the amyloid. That will take some time and effort, as we are just starting to dig into the underlying mechanisms.”—Esther Landhuis