Researchers believe they have discovered a new type of "tangle" in the Alzheimer’s brain: aggregates chock-full of RNA splicing machinery. Problems in RNA processing repeatedly surface in motor neuron disease. The new finding, reported in this week's Proceedings of the National Academy of Sciences online, makes the case that the same occurs in Alzheimer’s. Proteomics led scientists at Emory University in Atlanta, Georgia, to identify inclusions made up of spliceosome proteins in AD brains. These aggregates are accompanied by widespread defects in RNA splicing. While researchers knew that certain individual transcripts, such as tau, undergo altered splicing in AD, this study is the first to hint that the majority of RNAs may be at risk for mis-splicing. “Alterations in RNA processing might be a more global mechanism of neurodegenerative disease than previously thought,” said senior author Allan Levey.

The implications of this deficiency remain uncertain. Joint senior authors Levey, James Lah, and Junmin Peng, who has since left Emory for St. Jude Children’s Research Hospital in Memphis, Tennessee, collaborated on a large-scale project to analyze the insoluble proteome in seven different neurodegenerative conditions via mass spectrometry (see also Gozal et al., 2009). Joint first authors Bing Bai and Chadwick Hales of Emory, Yair Gozal at the University of Cincinnati, Ohio, and Ping-Chung Chen at St. Jude, describe one facet of that analysis, focusing on the protein set unique to AD. They compared cortical tissue from 10 people with late-stage Alzheimer’s with samples from 10 controls. They found 36 insoluble proteins that accumulated specifically in Alzheimer’s. These included the usual suspects—amyloid β (Aβ), Apolipoprotein E, and tau—as well as some newbies. For example, the researchers were intrigued to see several components of the U1 small nuclear ribonucleoprotein (U1 snRNP) aggregate as well. U1 contributes to the spliceosome complex that enacts the essential first steps of intron excision.

To characterize insoluble U1 snRNP in Alzheimer’s, the researchers located the complex in 30 AD brain samples with immunohistochemistry. In nearly all cases, the U1 snRNP appeared in “quite dramatic tangle-like structures,” said Lah. These cytoplasmic inclusions were absent from the brains of controls, as well as from brain samples of other tauopathies, making them a potentially specific Alzheimer’s marker, Lah said. Sometimes the U1 tangles overlapped with tau-containing aggregates, but not always (see image below). 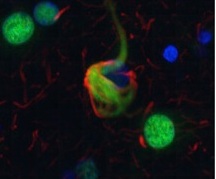 Does U1’s entanglement impair RNA processing? A total loss of U1 function would likely be lethal, Lah reasoned, but a partial loss might affect the transcriptome. Specifically, the scientists looked for a higher-than-normal proportion of RNAs containing the first intron, which ought to be removed by the U1 complex. Normally these unspliced RNAs make up about one percent of overall mRNA, Lah estimated; RNA from AD brain contained about 1.5 percent. Overall, three-quarters of transcripts Lah looked at had an overabundance of unspliced forms in AD brains, compared to controls. “This appears to be a global effect,” Lah said.

As is often the case with findings from postmortem brain, the researchers do not know whether these inclusions are a cause or effect of AD. U1 could be considered a cause if researchers discovered people who have Alzheimer’s due to mutations in U1 complex members, Lah and Levey noted. No such mutations have yet been linked to familial AD. However, Lah noted that the small nuclear ribonucleoprotein polypeptide N , a core component of U1 and related complexes, was weakly if not significantly associated with AD in one genome-wide association study (see Naj et al., 2011). Lah suspects the U1 entanglement occurs downstream of Aβ pathology, and early during tau aggregation. The downstream effects of U1 pathology could be broad, since so many genes need it for splicing. U1 seems to be aggregated in the majority of AD cases, so a treatment to solve its problems could potentially be quite useful, Levey added. In addition, he suggested, the U1 spliceosome might serve as a biomarker in cerebrospinal fluid or on brain images.

Benjamin Wolozin of Boston University, who was not involved in the study, agreed that U1 could offer a new molecular marker. He suggested that U1 could cause disease in a similar manner to TDP-43 and FUS in amyotrophic lateral sclerosis and frontotemporal dementia. These two proteins move from their normal location in the nucleus to the cytoplasm and miss the pre-mRNAs awaiting their attention in the nucleus. Wolozin and others have linked AD to RNA binding proteins, such as those found in stress granules (see ARF related news). It is unclear if the latter are related to U1 aggregates, but the new study makes a particularly robust association between AD and splicing, said Wolozin.—Amber Dance