The immune system has recently seized the spotlight in Alzheimer’s research, with several genome-wide association studies (GWAS) linking the disease to genetic variation in microglia genes. However, it remains unclear how these genes influence pathology. Most of the genetic variants uncovered lie far from coding elements, and geneticists believe they are inherited with other, as yet unidentified polymorphisms that are the real risk factors. In the August 14 Journal of Neuroscience, researchers led by Steven Estus at the University of Kentucky, Lexington, revealed the functional variant for one of these risk genes, CD33. Previously, several GWAS identified a single nucleotide polymorphism (SNP) in the promoter region of this gene that lowers AD risk (see related ARF news). Now, Estus and colleagues link this SNP to a co-inherited one that disrupts CD33 mRNA splicing and disables the protein. Because CD33 signaling inhibits phagocytosis, the inactive form likely enhances the ability of microglia to chew up Aβ deposits, thus protecting against AD, the authors suggest. CD33 encodes an immunoglobulin-like cell-surface receptor, currently number eight on AlzGene’s Top Ten list.

The findings dovetail with recent studies that reported a link between CD33 expression and phagocytosis. Rudy Tanzi, Ana Griciuc and colleagues at Massachusetts General Hospital, Charlestown, found that microglia in the AD brain make too much of the receptor and struggle to degrade Aβ (see ARF webinar and Griciuc et al., 2013). Likewise, researchers at Brigham and Women’s Hospital led by Philip De Jager tied the CD33 risk allele to greater expression of the receptor on the surface of microglia, and less internalization of Aβ (see Bradshaw et al., 2013). The data reinforce each other and support the idea that microglia play a key role in keeping amyloid pathology in check and lowering AD risk, Estus told Alzforum. The findings also gibe with the 2012 identification of a variant in the microglial gene TREM2 as a major AD risk factor (see ARF related news story). TREM2 enhances phagocytosis, and the AD risk allele inactivates the protein. CD33 and TREM2 thus have opposing effects on microglial activation (see figure below). In both cases, mutations that suppress phagocytosis increase AD risk. 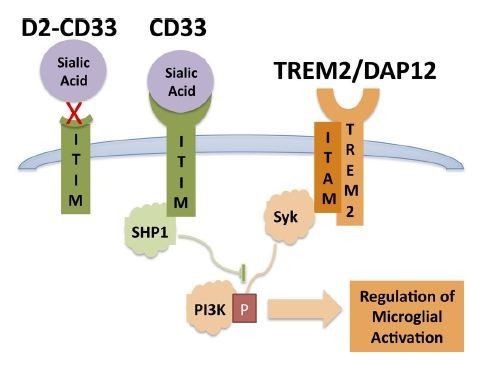 Microglial Balancing Act: By activating or blocking phosphatidyl-inositol-3 kinase (PI3K), CD33 and TREM2 have opposing actions on activation of microglia and phagocytosis of Aβ.
Image courtesy Malik et al., and the Journal of Neuroscience, 2013

Although these previous studies hinted at the mechanism by which CD33 might affect AD risk, they did not identify the functional mutation. To pin this down, first author Manasi Malik looked to different CD33 mRNA isoforms. She examined RNA isolated from 28 postmortem human AD brains and 27 age-matched controls. Many transcripts from both samples lacked exon 2, which encodes the domain that binds sialic acids. Since sialic acids activate CD33, transcripts missing exon 2 (D2-CD33) are predicted to remain quiescent. Importantly, Malik and colleagues found that while microglia from AD brains made more total CD33 than did cells from control brains, they made less D2-CD33. This suggested that the functional protective mutation might affect splicing, favoring more of the silent receptor.

What is the functional variant? The authors sequenced the CD33 gene to look for polymorphisms that co-inherit with the GWAS SNP, rs3865444. They found a second SNP that fit the bill, rs12459419, in the fourth base of exon 2. People with a T nucleotide at this locus had a higher ratio of D2-CD33 to total CD33 compared to those who carried a C at this position. In cell culture, microglia transfected with the protective T allele made three times more D2-CD33 than did those without, confirming that this SNP directly affects RNA splicing. In ongoing work, Estus and colleagues are investigating whether other splice isoforms are affected by the protective rs12459419 variant. They are also interested in using the methods in this study to go after other GWAS hits.

“The authors have designed a clever way to assess the role of one of these [GWAS] variants… and provide a functional SNP linked with the GWAS SNP,” Rita Guerreiro at University College London, U.K., wrote to Alzforum (see full comment below). In future work it will be important to test the new rs12459419 SNP in large case-control cohorts, as well as to directly test the role of sialic acids in this pathway, she suggested.

Estus noted that his study, along with those by Griciuc et al. and Bradshaw et al., suggest that inhibiting CD33 could be a therapeutic strategy for lowering amyloid pathology and delaying AD. Antibodies that repress the receptor exist, and have been tested as treatments for acute myeloid leukemia (see, e.g., this Phase 1 trial of lintuzumab). The Food and Drug Administration approved Pfizer’s anti-CD33 antibody Mylotarg for cancer treatment, but the company later voluntarily withdrew the drug from the U.S. market due to safety concerns (see FDA press release). To delay Alzheimer’s disease, a drug that stimulated phagocytosis might have to be given for many years. For this reason, a better strategy might be to develop small molecule inhibitors of CD33, Estus suggested.—Madolyn Bowman Rogers