For several years now, the Alzheimer's research and treatment communities have been awaiting the fruition of promising research into quantitative imaging agents that could signal the presence of amyloid in the brains of living people (see ARF meeting reports from Stockholm and Paris). Such a biomarker could become a diagnostic tool, test the amyloid hypothesis definitively in live humans, and help assess whether experimental treatments work in trial populations. Now one of the hot prospects—the thioflavin derivative termed Pittsburgh Compound-B (PIB)—has shown its ability to distinguish clinically diagnosed patients from control subjects.

Bill Klunk and Chester Mathis, who developed the hydroxylated benzothiozole as a PET tracer together at the University of Pittsburgh in Pennsylvania, published the study today in an early online article in the Annals of Neurology. Their collaborators Henry Engler, Bengt Langstrom and Agneta Nordberg at Uppsala University in Sweden, and others, evaluated PET images from 16 patients diagnosed with mild AD and nine controls (six older subjects, and three young subjects who almost certainly had no amyloid deposits). In the AD patients, the PIB signal doubled relative to controls (meaning they retained significant amounts of PIB) in various cortical areas, particularly in frontal cortex, as well in the striatum. By contrast, the biomarker sailed through the brains of the control subjects, clearing out without accumulation. Areas not affected by amyloid deposition in AD (subcortical white matter, pons, and cerebellum) did not differ between the groups. 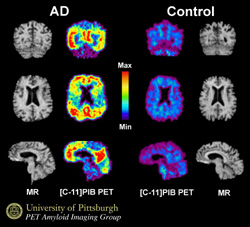 Are you looking at the future of Alzheimer's diagnosis? In these PET images from Bill Klunk, Chester Mathis, and colleagues, their tracer Pittsburgh Compound-B (PIB) lights up cortical areas laden with amyloid in AD patients. The results of a PIB-PET study conducted at Uppsala University in Sweden appeared today in the online edition of the Annals of Neurology. As it happens, the work of Klunk, Mathis, and their collaborators was featured tonight in the PBS television special called "The Forgetting: A Portrait of Alzheimer's."

Interestingly, the only control subject to show PIB signals in the same range as the AD patients was the oldest (77 years), leading the authors to ask whether this person might be in a preclinical stage of AD. As the authors point out, "The ability to longitudinally follow PIB retention as an in-vivo measure of amyloid deposition now gives us a tool through which we may be able to answer this question in a manner that postmortem studies can not." Conversely, three AD patients had PIB values in the range of the control group. Their clinical deficit was mild, and they did not progress significantly over the two- to four-year follow-up period.

The researchers compared their PET results to several other measures. For example, they found an inverse relationship between PIB signal and glucose turnover in parietal cortex in the AD patients, but no correlation between PIB signal and MMSE scores or ApoE4 genotype. This was a small, proof-of-principle study.

The authors close their article with a warning against the circular reasoning that is inherent in the acceptance of amyloid deposition as both a putative cause and diagnostic proof of AD. At this early stage of imaging research, they prefer to think of their method as a way to investigate β-amyloidosis in the brain. With this precept, they write, "Several basic, unbiased questions then can be asked regarding (1) the correlation of β-amyloidosis with clinical diagnosis; (2) the natural history of β-amyloidosis and its onset relative to clinical symptoms of dementia; and (3) the ability of β-amyloidosis to serve as a surrogate marker of efficacy for anti-amyloid therapeutics.

A second human imaging study with PIB is ongoing at the University of Pittsburgh. At the 33rd Annual Meeting of the Society for Neuroscience held last November in New Orleans, Klunk reported some initial data of this study. It builds on the Swedish study by including people with mild cognitive impairment (MCI), a prodromal stage of AD, and by analyzing PIB pharmacokinetics in blood samples drawn from the study participants. As in the Swedish study, AD patients, but not controls, retained significantly more PIB in brain areas known to accumulate amyloid, Klunk said. MCI subjects fell in between and varied in their PIB retention; early results of direct comparisons with MRI imaging hint that PIB-PET is more sensitive at picking up MCI than is MRI. The scientists will follow the Pittsburgh subjects over time to see how their PIB signal and their clinical status changes. One hope of such longitudinal studies is that the time of diagnosis could be pushed back years into the preclinical phase. Klunk noted that even if all future studies go well, a more practical radioligand must first be developed before PIB can become widely available.

Klunk told the audience that the University of Pittsburgh has signed a licensing agreement with Amersham Biosciences to move PIB through clinical development, but added that this agreement does not restrict academic collaborations. Several centers in the U.S. have agreed to test PIB for research purposes.

And now, for the perennial optimists: At the conference, other scientists not connected with this work privately mused that together, this and other developments in experimental therapeutics conjure up the vision of a patient complaining about subtle memory problems and visiting a neurologist. If a PIB-PET scan revealed significant amyloid buildup, the patient could receive a vaccination in the hospital to clear it out in an intense one-time treatment not unlike chemotherapy or heart angioplasty. After that, the person would be titrated to the proper dose of a statin or an NSAID, with a generous helping of antioxidants thrown in, and monitored periodically to ensure the amyloid does not come back. Science fiction? For now, yes.—Hakon Heimer and Gabrielle Strobel