Oscar Wilde’s Dorian Gray sold his soul to maintain his youthful appearance. Could he have simply indulged less? The latest research into caloric restriction—known to dramatically lengthen the lifespan of everything from yeast to mice—shows that it not only increases longevity in rhesus macaque monkeys, but also reduces onset and incidence of age-related disease in these non-human primates. The dietary restriction effectively delays brain aging, as well, as revealed by a significant reduction in brain atrophy compared to controls. “The broader view of aging, which encompasses much more than simply survival, would say that, quite clearly, the aging process is being slowed by caloric restriction in our monkeys,” said senior author Richard Weindruch, University of Wisconsin, Madison. By extrapolation, the findings, which are reported in tomorrow’s Science, suggest that cutting down on calories might similarly benefit us humans. But if reducing your calories by 30 percent sounds like a tall order, then there may be some comfort in a paper in yesterday’s Nature online. Researchers report that rapamycin, a compound better known as an immunosuppressant, can increase longevity in mice by as much as 38 percent—even when given to animals in mid- to late life. The research suggests that mTOR (mammalian target of rapamycin), the protein that binds rapamycin, might be a potential target for anti-aging drugs.

The caloric restriction (CR) study is one of several to examine whether CR has as dramatic an effect in primates as it does in other animals. Since 1989 Weindruch and colleagues have charted the lives of 30 adult male rhesus macaques. An additional 30 female and 16 male monkeys were inducted into the study in 1994 to beef up statistical power. Half of the monkeys were maintained on a normal diet while half were gradually switched to a 30 percent calorie-restricted diet. The restriction was personalized for each animal after first measuring how much they ate over a three- to six-month period. “Just like humans, there is tremendous heterogeneity in how much individual monkeys choose to eat,” said Weindruch.

One of the exciting aspects of the study is that the control animals were kept on normal diets, suggested Mark Mattson from the National Institute on Aging, Bethesda, Maryland. Mattson was not involved in the study but has carried out similar work in rodents. “In rodent studies we take obese animals, reduce calories, and show that has benefit, but what these researchers have done is reduce calories in non-obese monkeys,” said Mattson. While it is clear that obese humans will benefit from losing weight, “this study suggests that humans who are not obese may also benefit from reducing calories,” he told ARF.

First author Ricki Colman, University of Wisconsin, together with colleagues there and at the University of Alabama, Birmingham, found that the animals on the CR diet survived a lot longer than controls. At the time the study was reported, 50 percent of the control animals had died, versus only 30 percent of the CR animals. The latter not only looked much healthier (see image below) but they also had a significantly lower incidence of age-related diseases, including cancer, cardiovascular disease, and diabetes. Cancer and cardiovascular disease were reduced by half in animals on the restricted diet. Overall, monkeys on normal diets had three times the death rate from an age-related cause as the CR animals, even with the benefit of medical intervention. “We treated all animals that became sick,” said Weindruch. “We made that decision based on our desire to make this as close to a human trial as possible.” 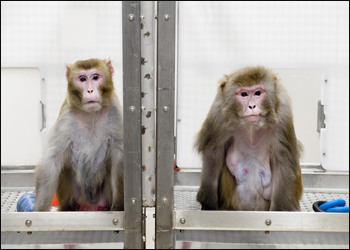 Picture of Health
Compared to Owen (right), 29 years old and on a normal diet, Canto (left), 27 and on a CR diet, looks much more sprightly. Eighty percent of rhesus monkeys on the CR diet are still alive, while 50 percent of the animals on a normal diet have already passed away. In captivity, the average lifespan of a rhesus monkey is about 27 years. Image credit: University of Wisconsin-Madison University Communications/Photo by Jeff Miller

For researchers working on neurodegenerative disease, the data on brain may be particularly interesting, since brain atrophy is one aspect of aging that is not well reproduced in rodent studies. Co-author Sterling Johnson, also from University of Michigan, found that age-related atrophy in several regions of the brain, including the caudate, putamen, and left insula, was significantly reduced in animals on the CR diet compared to controls. CR also significantly modulated the effect of age on atrophy in the mid-cingulate cortex, lateral temporal cortex, and the right dorsolateral frontal lobe. “Those data were quite striking, particularly the putamen, which degenerates in Parkinson disease,” said Mattson. “That region of the brain was bigger in the CR animals by about 30 percent, which is pretty dramatic.” Mattson and colleagues previously demonstrated that CR, even for six months, can protect primates against toxins that cause Parkinson disease (see Maswood et al., 2004), and he said that increased levels of neurotrophic factors in the CR animals may contribute to the protective effects. “There are a lot of analyses that Weindruch and colleagues can do on these brains to see whether, for example, levels of neurotrophic factors are increased,” he said.

Johnson said that there are plans to look at both functional correlates of decreased brain atrophy, including preserved executive function, coordination, and fine motor control, and also more sophisticated pathology, including staining for amyloid, cell counts, and measures of synaptic density. “Now that we know CR retards aging in monkeys, it is time to start asking mechanistic questions,” suggested Weindruch. One question is whether this type of intervention can affect diseases such as Alzheimer’s and frontotemporal dementia, suggested Johnson. “In mice, dietary restriction has been shown to affect amyloid accumulation but whether that will occur in primates is not clear,” he said.

There is reason to believe that the effects of CR seen in non-human primates may also extend to humans. Studies suggest that compared to people on normal diets, subjects on CR age better, having reduced inflammation, blood pressure, and insulin resistance (see ARF related news story). However, considering obesity continues to rise in some developed countries despite repeated medical warnings, getting humans to accept a 30 percent reduction in calories is probably a huge challenge. That’s one reason for intense interest in finding compounds that can mimic the effects of caloric restriction, which is one aim of the National Institute on Aging Interventions Testing Program (ITP)). The program led to the discovery of the anti-aging effect of rapamycin.

ITP researchers led by Richard Miller at the University of Michigan, Ann Arbor; Randy Strong at the University of Texas Health Science Center, San Antonio; and David Harrison from The Jackson Laboratory, Bar Harbor, Maine, gave the drug to a heterogeneous population of mice that were bred to be genetically unique. The mice were independently tested at the three different centers. Given to the animals starting at 600 days old (equivalent to a 60-year-old person), the drug (2.24 mg/Kg/day) significantly increased both median and maximum lifespan in male and female mice. Overall, lifespan gains were 9 and 13 percent for males and females, respectively, but this jumped to 28 and 38 percent, respectively, when measured from the time rapamycin was administered. The researchers have begun testing another group of mice beginning treatment at 270 days, and that, too, indicates lower death rates in the rapamycin-treated group, though many of those animals are still alive. “Additional data are needed to provide an accurate estimate of effect size, and to evaluate effects on maximal longevity,” write the authors.

Mammalian target of rapamycin (mTOR) is a kinase that has been implicated in cancer but autopsy data suggest that while rapamycin postpones death in these animals, it does not change the cause of death—there was no difference in the spectrum of lesions between treated and control animals. The researchers did find that mTOR activity was reduced, as judged by phosphorylation of the mTOR substrates. The authors note that mTOR signaling coordinates growth in response to nutrient availability, energy status, growth factor stimuli, and cell stress. “This strategic position at the nexus of nutrient/stress sensing pathways may contribute to the importance of mTOR function in regulating lifespan in invertebrates and mammals as well,” write the authors. Rapamycin has also been linked to reversal of memory deficits (see ARF related news story).

As Matt Kaeberlein and Brian Kennedy from the University of Washington, Seattle, write in an accompanying Nature News & Views, “it is tempting to speculate that rapamycin may be functioning as a dietary-restriction mimetic.” However, Harrison and colleagues note that the drug extends lifespan without affecting body weight. Most studies also report little effect of dietary restriction in mice older than 550 days.

Could rapamycin serve as the basis for an anti-aging pill? “The potential immunosuppressive effects of this compound alone are sufficient to caution against this,” write Kaeberlein and Kennedy, but they suggest that as other downstream targets of mTOR are better characterized, it may be possible to develop pharmacological strategies that provide health and longevity benefits without unwanted side effects. That’s a picture Dorian Gray might have appreciated.—Tom Fagan