Alzheimer's disease researchers are accustomed to thinking of amyloid-β being cleared from the brain through the blood vessel walls and into the circulation, where it is taken up by the liver and kidneys (see Ghiso et al., 2004). But there is also evidence that Aβ can go the other way—from the blood to the brain (see Deane et al., 2003). Can Aβ from the blood seed amyloid deposition in the brain? That’s the conclusion of a paper in the October 21 Sciencexpress. Researchers led by Mathias Jucker, University of Tubingen, Germany, injected Aβ-rich brain tissue into the peritoneum of young mice. Six to seven months later, the mice were laden with cerebral amyloid angiopathy and brain amyloidosis. “The results look pretty striking, and how exactly this happens is a really interesting question,” said Bruce Lamb, Cleveland Clinic, Ohio. Lamb was not involved in the study. “It suggests there could be some sort of feed-forward mechanism, where any Aβ that is initially deposited in the brain and gets out into the periphery can come back and exacerbate the pathology that is already there,” Lamb told ARF. He thinks this study will stimulate intense debate.

Jucker and colleagues reported last year that Aβ injected into mouse brain seeds the growth of new amyloid deposits far beyond the injection site (see ARF related news story). But the latest report takes things a step further. Showing that peripherally implanted Aβ can do the same thing came as a surprise even to Jucker. “Nobody would have believed misfolded/aggregated Aβ could go from the periphery to the brain,” Jucker told ARF. In fact, the researchers first found evidence for this two years ago, but waited to publish until, with the help of Matthias Staufenbiel at Novartis in Basel, Switzerland, they reproduced the results in a different laboratory in a different country.

First author Yvonne Eisele and colleagues took brain extract from old transgenic mice (APP23) that have rampant plaque pathology and injected it intraperitoneally into two-month-old APP23 animals. Six animals got two injections, containing 1 to 2 micrograms of Aβ, one week apart. After seven months, all six animals had florid cerebral amyloid angiopathy (CAA) and parenchymal deposits of Aβ (see figure below). The amyloidosis was greatest in the anterior and entorhinal cortices, and also the hippocampus, regions of the brain that first deposit amyloid pathology in Alzheimer’s disease. The same induction of amyloidosis occurred in five out of five animals tested in the second cohort. In comparison, control APP23 animals have almost no Aβ pathology by nine months. 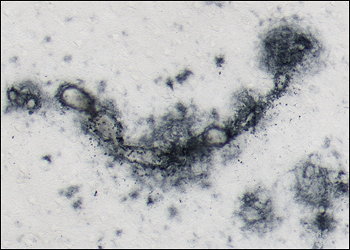 What does this finding mean for Alzheimer’s disease? In its press release, Science labeled Aβ as infectious, but Jucker downplayed this idea. Instead, he believes that the research raises fundamental mechanistic questions about how Aβ gets into the brain and is carried in the circulation. He believes the rampant CAA occurs because it is in the blood vessels where the seeded Aβ and brain Aβ come in contact.

But how does Aβ get from the injection site to the blood? Jucker speculates that it must be carried there by cells. But the details of that mechanism need to be worked out. “I hope that many researchers might start working on this to identify the mechanism,” said Jucker.

Could naturally occurring peripheral Aβ act as the seed for brain amyloidosis? Compared to the brain, little Aβ is made elsewhere in the body, said Jucker. David Holtzman, Washington University School of Medicine, St. Louis, Missouri, agreed. “The amount of Aβ in the periphery is miniscule compared to the brain,” he told ARF. Even transgenic mice that Lamb developed, which overexpress human APP in many tissues outside the brain, produce scant peripheral Aβ. This is partly because β-secretase, which catalyzes one of two steps in Aβ production, is predominantly found in neurons. However, in a common disease called inclusion body myositis (IBM), Aβ is found in protein aggregates that accumulate in muscle. Could people with IBM be at greater risk for CAA? That is an interesting association that probably should now be rethought, suggested Lamb. He added that it is not clear how much Aβ from IBM inclusions might be released into the blood. Holtzman told ARF that very little Aβ accumulates in the muscle in IBM. Jucker also said he is not convinced that there is a lot of Aβ in IBM inclusions to begin with, or that it is truly an aggregated, congophilic form, but he is already planning on injecting the material intraperitoneally into mice to see if it elicits brain amyloid.—Tom Fagan.