According to a study in tomorrow’s issue of Science, a spinal cord procedure less invasive than those that deliver epidural anesthesia can restore locomotion in two rodent models of Parkinson disease. The new work points to a possible safer alternative to deep brain stimulation (DBS), a somewhat risky PD treatment that works in some patients when drugs fail or produce nasty side effects. In today’s ScienceXpress online, scientists apply a new optical tool to uncover surprising insight into the basis for DBS’s therapeutic effects. Using pulses of light to systematically activate or inhibit specific cells within neural circuits, the technology could help fine-tune treatments for PD and for other brain stimulation-responsive conditions such as epilepsy.

Curiously, inspiration for the new PD approach came from epilepsy studies done by Nicolelis’s group years ago. Epileptic seizures are marked by low-frequency, synchronous firing of cortical neurons. Nicolelis and colleagues showed they could relieve seizure activity in rats by stimulating the trigeminal nerve, the cranial nerve that is responsible for facial sensation (Fanselow et al., 2000). It looked as though the nerve stimulation was “introducing some noise into the system,” Nicolelis told ARF. “The cells were basically getting out of their rhythmic firing pattern.” Later, while investigating disrupted neural activity in dopamine-transporter knockout mice, which develop PD-like motor symptoms (Costa et al., 2006), he found a striking parallel. “When I looked at the data we were getting in these animals, the patterns of brain activity resembled epileptic seizures,” Nicolelis said.

Putting two and two together, his team initially tried stimulating the trigeminal nerve in PD animals. This restored facial movements but not other motor capabilities. To trigger more widespread benefit, the researchers took a leap and went for the large tactile nerves in the spinal cord. “When you stimulate these fibers, they have a very powerful effect on the cortex. They get cells to fire asynchronously,” Nicolelis said (see image below). The stimulation dramatically improved motor function in mice with PD symptoms induced by a dopamine synthesis-blocking drug (α-methyl-para-tyrosine, or AMPT) and in 6-OHDA-lesioned rats that already had substantial loss of dopaminergic neurons. Furthermore, when given along with L-dopa injections to dopamine-transporter knockout mice, spinal cord stimulation lowered the effective L-dopa dose needed to relieve motor symptoms by 80 percent. 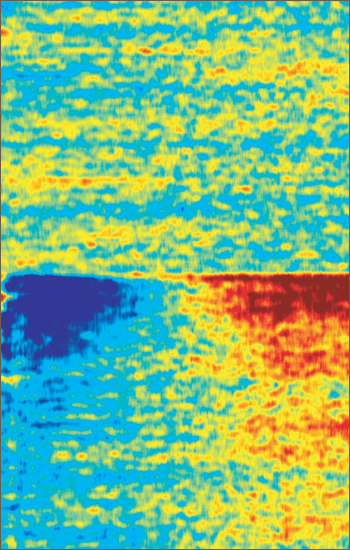 Zapped Back to Asynchrony
Standardized oscillatory brain activity of a parkinsonian mouse before (top) and after (bottom) spinal cord electrical stimulation. After stimulation, rhythmic activity of neurons in the low-frequency range dramatically decreases (blue, left side) while activity in the high-frequency range increases (red, right side). This shift in oscillatory activity corresponds to a desynchronization of big groups of neurons, a condition that is thought to favor or facilitate motor activity. Image credit: Romulo Fuentes

The new technique appears simpler and safer than DBS. “We are not invading the brain. We make a little hole in the vertebra and slide these paper-like electrodes onto the surface of the spinal cord,” Nicolelis said. Because the target axons are large and carry no pain signals, he notes, patients should not feel much discomfort from the stimulation. Nicolelis said that clinical trials of the spinal cord procedure could begin as early as 2010, provided that the primate studies his group has planned for this year succeed.

Their findings in rodents suggest that targeting one spot on the spinal cord can influence the dynamics of entire circuits—not surprising, as “these fibers are very big and converse with many different areas of the brain,” Nicolelis said. “We are probably having a bulk effect on the motor cortex and basal ganglia at the same time. Multiple pathways are being activated in a very particular way. That's the reason we think it works.”

He admits, though, that not much is understood about what the procedure does at the cellular or molecular level. But even DBS, an accepted PD therapy for nearly a decade, has remained in large part a black box as far as mechanism. Put simply, “the puzzle with Parkinson’s DBS is understanding what's really being done, and what is different in the brain as a result of what is done,” said Karl Deisseroth of Stanford University School of Medicine, Palo Alto, California, in an interview with ARF.

To figure out which cells mediate the therapeutic effects of DBS, Deisseroth tweaked a set of optical tools his lab had previously developed to turn specific neuronal populations on or off using laser light. At the heart of this technology are microbial light-activated cation channels (channelrhodopsins) and chloride pumps (halorhodopsins) that can be targeted with cell type-specific promoters to reversibly stimulate or inhibit select CNS cells (Boyden et al., 2005; Zhang et al., 2008; Gradinaru et al., 2008). As described in a paper published online today in ScienceXpress, Deisseroth, first author Viviana Gradinaru, and colleagues have applied these optogenetic tools to examine brain activity in 6-OHDA-treated rats with PD-like motor deficits.

Activated by light carried through flexible 200-micrometer-wide fiber optics placed into target brain areas of freely moving animals (see image below), the system overcomes three features that make it hard to figure out how DBS works. For starters, DBS electrodes cannot distinguish between the many cell types intertwined and intermixed within a given brain region—everything gets zapped. Optogenetics, on the other hand, allows precise targeting of specific cells. A second problem with electrodes is that “you don't really know if you're turning on or turning off,” Deisseroth said. To complicate matters further, electrical stimulation interferes with electrical recording. With optogenetics, however, “we can use light to stimulate and also use light to record,” Deisseroth said. “That really allows us to see what's happening in the circuit and see what's going on in the affected brain tissue.”

Switching Neurons On and Off
In a rat model of Parkinson disease, movement and motor skills can be at least partially restored by either stimulating or inhibiting particular regions of the rodents' brains with light. Stimulating axons that project to the subthalamic nucleus caused robust and consistent, though also reversible, therapeutic effects in the diseased rats. Image credit: Karl Deisseroth

Using lentiviruses carrying halorhodopsin or channelrhodopsin genes under the control of various promoters, the researchers systematically turned on or off different cell types in the rats’ subthalamic nucleus (STN), the primary region targeted by DBS. “We didn’t see any therapeutic effect, which was pretty much a shock,” Deisseroth told ARF. Instead, the researchers saw motor improvement when they selectively stimulated axons projecting to the STN. “We were able to trace at least one possible source of those axons to the motor cortex, which is in the surface part of the brain,” Deisseroth said. “This is pretty intriguing insight into brain circuitry. But even more, it may suggest that there could be therapies that are less invasive because they would target more accessible regions of the brain.”

He believes his group’s findings may have converged on the same mechanism that underlies the spinal cord stimulation reported by Nicolelis and colleagues. “The spinal cord is driven in part by the motor cortex. They may be recruiting the same cortical neurons that we proved were relevant in the optogenetics approach,” Deisseroth said. “We implicated the motor cortex by directly showing that one could drive those cells and get a therapeutic benefit. Basically, all signs may be pointing to motor cortex.”

Deisseroth hopes that optogenetics can guide the development of therapies that treat a broader range of symptoms than conventional DBS does. In a recent study comparing the two DBS target areas—STN and globus pallidus interna (GPI)—in 45 PD patients, researchers at the University of Florida, Gainesville, found that targeting the STN resulted in greater decline in verbal fluency and mood seven months after the DBS procedure. As shown in that study, published last week in the Annals of Neurology (Okun et al., 2009), “DBS can have side effects. It can have incomplete efficacy in different patients,” Deisseroth said. “Optogenetics will help us understand all that and design better treatments. We'll be able to understand which cell types contribute to the side effects, which ones contribute to efficacy, and the best way to drive each cell type.”

Extending their optogenetics strategy to non-electrical cells, Deisseroth’s group has developed related tools that use light to drive specific biochemical pathways. For a study published yesterday in Nature, first author Raag Airan and colleagues created hybrid membrane proteins by coupling the extracellular part of the light-sensing retinal protein rhodopsin with the intracellular portion of a G protein-coupled receptor. “The result is that you end up with a G protein-coupled receptor that's not activated by chemical anymore but instead by light,” Deisseroth said. The researchers showed that these photoactivatable G protein signaling pathways could drive conditioned place preference in freely moving mice.—Esther Landhuis