Ginger.io—a startup company that is turning Smartphones into data collectors for researchers, won a $175,000 prize in a ceremony hosted at the Newseum in Washington, D.C. The platform tracks mood, memory, and functional status in many types of chronic patients, including those with Alzheimer's disease. George Vradenburg, Geoffrey Beene Gives Back Alzheimer's Initiative (GBGBAI), announced the award to a room of 50 people, including sponsors from the Alzheimer Immunotherapy Program (AIP) of Janssen Alzheimer Immunotherapy and Pfizer, Inc., plus other finalists and judges.

"The tests we have to detect AD early are either subjective or expensive. We need low-cost alternatives," Vradenburg told Alzforum. Back in April, five finalists received $25,000 to develop their ideas (see ARF related news story). They came together yesterday to present in front of six judges, pitching their teams' answer to the stated challenge of bringing new technology to the early assessment, diagnosis, prevention, or treatment of Alzheimer's disease (AD).

Ginger.io, a team led by Sai Moturu, uses mobile phone communication and location sensor data to track a person's mood, executive function, and memory over time. "Perhaps an AD patient takes longer to make a phone call," said Moturu. The Ginger.io app can detect changes from baseline in patients. Then, using machine learning techniques, it can analyze and summarize that data on a Web-based dashboard accessible to a care team. Patients can also take interactive cognitive tests on their phones, such as a verbal activity that carries from one day to the next. That way, doctors can monitor their patients' disease progression across the whole year, rather than periodically at clinic visits. Though it does require a phone with sensors, the application itself will be free to patients, with an aim to improve care and reduce costs. 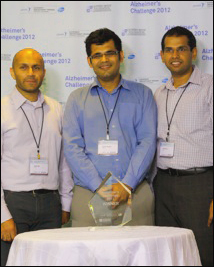 The winning Ginger.io team is pictured behind their award.
They are (from left to right) Sabih Mir, Anmol Madan, and Sai Moturu. Image courtesy of Gwyneth Dickey Zakaib

The other four finalists' ideas included technologically enabled analysis tests that take stock of things such as the time and thought required by an activity, as well as other ways of passively tracking patients in their homes. Each addressed some gap in today's research and offered low-cost digital solutions to benefit patients, caregivers, or researchers. The judges were so impressed by all finalists' presentations that Vradenburg announced a $25,000 collaboration prize to any of the teams that collaborates with Ginger.io to improve the company's software further. A Ginger.io company representative said they are interested in one particular collaboration, but are holding details until later. Next year's challenge will be announced in the coming months, said Vradenburg. Like this one, the prize will be shaped with InnoCentive, a company that aims to quicken clinical trials and mine presymptomatic population data for new risk factors. That challenge may head in the direction of crowd sourcing—connecting people's data with researchers—so that scientists understand better the progression of the disease.—Gwyneth Dickey Zakaib.