Biomarker data from the Dominantly Inherited Alzheimer Network (DIAN) paint a sobering picture, showing that a cascade of pathophysiological changes begins decades before a person is likely to develop familial Alzheimer’s disease. Alzforum has followed these findings closely as they have been presented at joint DIAN-pharma meetings over the last two years (see ARF related news story; ARF news story; and ARF news story). Now, baseline data from the first 128 participants have been formally published in the July 11 New England Journal of Medicine.

To analyze the data, the researchers looked at how many years away participants were from the age at which their affected parent first showed noticeable signs of AD. Those signs include forgetfulness, poor judgment, or confusion about where they were. Because familial AD has a similar onset age across generations, the data provided an estimate of how close each child was to developing the disease. Cross-sectional analysis among the participants then suggested a progression of biomarker changes, although proof will have to wait on the longitudinal data that will roll in over the next several years, noted Randy Bateman at Washington University in St. Louis, Missouri, who led the research group.

As previously reported, Aβ42 levels in cerebrospinal fluid (CSF) appear to move first. They are at their highest levels in people 25 years or more away from expected disease onset, and are lower at every age thereafter until they bottom out around the age of onset. People 15 years away from their parent's age at onset show several abnormal biomarkers: β amyloid deposits in the brain, high CSF tau levels, and shrunken hippocampi. Brain deposits appear to plateau around the estimated age at onset (see the video on the NEJM website), but the other biomarkers are progressively worse in people at later stages of the disease. Participants 10 years out had decreased brain metabolism compared to controls, and showed significant deficits on a test of episodic memory; these markers also were progressively more extreme in people at later stages. Five years before expected age of onset, participants already had global cognitive deficits, with an average Clinical Dementia Rating-Sum of Boxes, of 1, which indicated mild dementia (see figure below). Nonetheless, participants typically did not meet diagnostic criteria for dementia until about three years after their estimated age at onset. “These findings suggest that the diagnosis of clinical dementia is made late in the course of the biologic cascade of autosomal dominant Alzheimer’s disease,” the authors write. 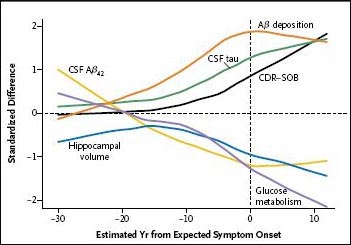 Combined model of biomarker changes, based on cross-sectional DIAN data.

The findings roughly match current biomarker progression models for late-onset AD (see ARF Webinar), but Bateman noted that although the pathophysiology seems similar, the timing and order of changes may vary between familial and sporadic AD. More longitudinal studies in late-onset AD will be needed to clarify progression of this form. The DIAN biomarker data has been instrumental in designing the proposed clinical trial, Bateman told Alzforum. For example, the data helped researchers determine how many people they should enroll, at what age to enroll them, and what outcome measures to use, he said. More information on the trial may be found at the DIAN Expanded Registry.—Madolyn Bowman Rogers