Crystals of a bapineuzumab-Aβ complex may explain how the antibody targets amyloid plaques in the brain, according to researchers in Australia. In the February 18 Scientific Reports, Michael Parker and colleagues at St. Vincent's Institute of Medical Research, Melbourne, report that bapineuzumab, a humanized mouse antibody, captures the N-terminal of Aβ in a helical conformation. This interaction may be unique. In complexes with mouse antibodies, which are used preclinically, the Aβ N-terminal exists as a random coil without secondary structure.

"The thing that distinguishes bapineuzumab from the non-clinical N-terminal antibodies is that it recognizes a conformation-dependent epitope. This was a real surprise, considering everyone was turning up antibodies that consistently see this region as linear," Luke Miles, first author on the paper, told Alzforum via e-mail. "It is therefore plausible that bapineuzumab can distinguish between soluble monomeric Aβ and Aβ in plaques."

In fact, when researchers reported that 3D6, the mouse antibody that provides the backbone for bapineuzumab, preferentially binds plaques, Miles was skeptical (see Seubert et al., 2008). "We knew the N-terminal of Aβ had little structure," he wrote. But now his work shows that Aβ adopts an N-terminal helical structure even without bapineuzumab. Miles found the same helical folding in the presence of TFE, a solvent that promotes intramolecular hydrogen bonds. TFE mimics water loss that might occur when proteins are embedded in membranes or folded in such a way as to eliminate solvent, as in plaques. The authors suggest that plaques are enriched with this helical conformation (see image below) or that it is in equilibrium with other Aβ conformational states in the plaques. 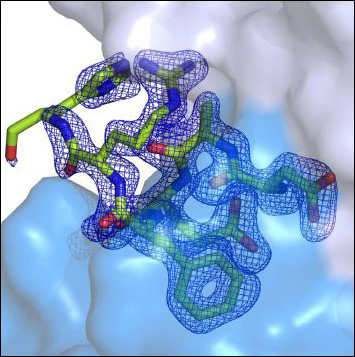 Pfizer and Johnson and Johnson, sponsors of bapineuzumab, halted development of the intravenous version when it had no clinical benefit in a Phase 3 clinical trial of patients with mild to moderate AD (see ARF related news story). Miles and colleagues' finding suggests that bapineuzumab cannot recognize N-terminally modified, or truncated forms of Aβ, because hydrogen bonds essential for the α-helical structure occur among the first three amino acids. Whether that relates to clinical efficacy is unclear. By some estimates, truncated peptides might make up as much as 50 percent of Aβ in the brain.