Microglia are the firefighters of the brain—when injury or infection strikes, they roll out and douse the flames. But recent research suggests that the glial heroes have plenty to do in between fires, as well. Rather than returning to the station house when all is quiet, they might use their equipment to remodel healthy synapses. In the November 2 PLoS Biology, researchers from the University of Rochester in New York report that microglia appear to swallow dendritic spines in the visual cortex of healthy mice when they find themselves in 24-hour-dark conditions.

“Microglia may have a very important role in the modification of synapses during learning and memory,” said first author Marie-Ève Tremblay, who led the study with senior author Ania Majewska. Their work doubles the number of so-called “inactive” microglial jobs from surveillance of the parenchyma (see ARF related news story on Nimmerjahn et al., 2005) to hands-on participation in synaptic plasticity as well. Reading about the non-immunological function of these cells “was a real wake-up call for me,” said Terrence Town, who studies microglia at the University of California in Los Angeles. He noted that the study raises important questions about what microglia might be doing in diseases such as Alzheimer’s.

The modern view of microglia is not so much as part-time firefighters, but as regularly working “electricians” that help rewire the brain, wrote Manuel Graeber of the University of Sydney in Camperdown, Australia, in a review in the November 5 issue of Science (Graeber, 2010). His review is one of three in a series covering microglia, astrocytes (Freeman, 2010), and oligodendrocytes (Emery, 2010). The new study reinforces scientists’ understanding of microglia as more than just brain-dwelling macrophages. “They are a unique population unlike anything else,” said Richard Ransohoff of the Cleveland Clinic in Ohio, in an interview with ARF. Ransohoff was not part of the study reported in PLoS.

Tremblay observed microglia in the brains of mice with electron microscopy (EM) and two-photon live imaging. She reassembled 3D EM images to see if microglia actually envelop synapses, and they did. For the live imaging, the researchers were unable to cut a complete window in the skull because doing so would activate the microglial injury response. Instead, they thinned a portion of the skull to 20-30 microns and imaged, through the bone, into the neural tissue (Marker et al., 2010; see also ARF related news story about thinned versus open skull windows). The researchers observed at least three animals per condition.

First, Tremblay examined four-week-old animals living in a normal cycle of 12 hours light, 12 hours dark. The majority of microglial processes were in contact with synapses, she said. And in the 3D reconstructions, some spines were surrounded by microglia—as if the glia were “hugging” the spines, Majewska said. Tremblay also observed the opposite arrangement, with synapse elements surrounding microglia (see video below). 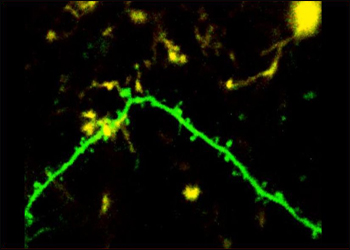 In this video, taken over one hour in a living mouse, microglia (yellow) interact with dendritic spines and branches (green). Image credit: Marie-Ève Tremblay/PLoS Biology

When Tremblay followed microglia-synapse interactions over a period of two days, she discovered that dendritic spines touched by microglia had a 24 percent chance of disappearing, whereas microglia-free spines vanished only 7 percent of the time. Overall, touched spines were more likely to expand: 62 percent grew, 32 percent shrank, and 6 percent were unchanged. Axon terminals, too, were affected; after touching by microglia, 38 percent grew, 55 percent shrank, and 7 percent were stable. This implies that microglia are not only monitoring, but actively influencing, synapse structure.

In addition, microglia were often associated with pockets of open extracellular space. This is significant, the authors said, because as microglia navigate the brain, they must break down structures in their way—rather like an axe-wielding firefighter hacking a corridor through a burning building. “As they are moving, presumably they are constantly remodeling the extracellular matrix,” Majewska said. “They might be remodeling the extracellular environment in such a way that it affects the plasticity of the synapse.”

Is this microglial-neuron contact functionally important? The scientists tested this by inducing synaptic remodeling in the mice. They switched three-week-old animals to 24 hours of darkness for a week, then looked at the visual cortex. Now, Tremblay observed more interactions between microglia and synapses, and more microglia enveloping synapses. Under these conditions, microglia-contacted spines were more likely to shrink than grow over a period of 25 minutes; 29 percent grew, but 57 percent shrank, while 14 percent were stable. Microglia during the dark state also moved around less, and exhibited thickened processes, reminiscent of activated microglia.

The microglia were also enlarged and contained what looked, by ultrastructural EM, like bits of synapses and spines, suggesting they had phagocytosed parts of neurons. As the animals adapted to their new dark environment, Tremblay suggested, they may require fewer synapses in the visual cortex and the microglia engulfed and swallowed the extraneous ones. This phagocytosis is just what activated microglia do in disease states, Majewska noted, suggesting that what these cells do during inflammation is simply a more extreme version of what they do under normal conditions. When Tremblay put the mice back in a normal light cycle for a couple of days, the microglia reverted to their normal state.

The study authors are the first to admit that the research thus far is mainly descriptive, with little evidence for direct cause and effect. That point was raised by other scientists as well. The challenge, of course, is to manipulate microglia without actually activating the cells. The scientists are currently developing genetic tools to subtly modify microglial function without activation, Majewska said.

The authors think microglia act as electricians in the rest of the brain, too. The work provokes many questions, particularly about what microglia might be doing during disease. Researchers reported last year that ischemia increases microglia-synapse contacts, and that some synapses disappear following this contact (Wake et al., 2009). And in Alzheimer’s disease, activated microglia and microgliosis are well described (see ARF related news story and Higuchi et al., 2009). Scientists have reported that amyloid-β might damage neurons by activating microglia, which then release potentially toxic immunomodulators such as nitric oxide (see for example Maezawa et al., 2010).

”Any neurologic disease that you care to name features microglial activation,” Ransohoff said. “And any one that affects the gray matter is going to have changes in synapses.”

But what about early in disease before microglia are rampantly activated? “Are microglia actively clearing dysfunctional synapses in AD?” Town wondered. If so, the process might be a drug target—although it is not clear what those drugs ought to do. “Do you want to promote [microglial clearing], or do you want to oppose it?” Town said. Whether the microglial cleanup squad is good, bad, or neutral is the key question, Ransohoff said.—Amber Dance