Without its associated metal ions, copper-zinc superoxide dismutase 1 (SOD1) adopts a loose, fluid structure that exposes normally buried cysteines, allowing it to link up with other SOD1 molecules via disulfide bridges. SOD1, which is mutated in one-fifth of people with familial amyotrophic lateral sclerosis, forms aggregates in those people and in animal models of the disease. In a paper published online this week in PNAS, scientists report on the structure of both wild-type and mutant Apo SOD1, and find that the metal-free state is disordered in solution. The data further support the idea that Apo SOD1 is responsible for aggregation of the protein.

Previously, Lucia Banci, Ivano Bertini, and colleagues at the University of Florence, Italy, showed that both wild-type and mutant SOD1 undergo oligomerization only when in the non-metallated state (Banci et al., 2008). “In this paper, the reason for the dramatically different behavior of Apo and metallated forms of SOD1 is now understood,” Bertini wrote in an e-mail to ARF. In mature, metal-bound SOD1, cysteines 6 and 111 are buried deep within the protein. But in metal-free SOD1, the two cysteines rise to the surface where they can interact with cysteines on other Apo SOD1 molecules and seed oligomerization.

The scientists used both NMR and X-ray diffraction to analyze the structures of wild-type SOD1 and two mutants: T54R and I113T. In crystal form, the structures of all three were nearly identical. In solution, the Apo form of SOD1 was disordered, showing a variety of conformations. The loops connecting the protein’s β-strands were particularly flexible. The holo form, in contrast, maintains a stable structure. 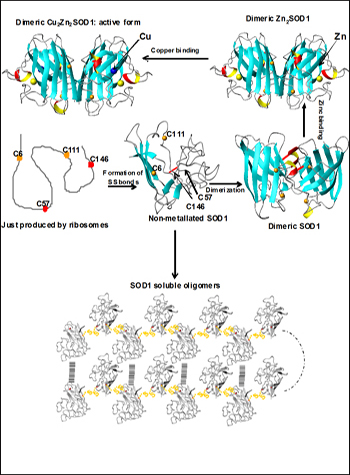 Importantly, the scientists did not use a thermostable SOD1 mutant common in structural studies, noted Jeffrey Agar of Brandeis University in Waltham, Massachusetts, who was not involved with the work. Many researchers find a SOD1 mutant without cysteines 6 and 111 easier to work with, but that mutant doesn’t cause ALS, Agar said, so has limited relevance to the disease. “I hope that other biophysical people take notice” and use the native protein, too, he said.

Banci and colleagues suggest that the metal-free form of SOD1 is key to seeding aggregation. “The mutation is not necessarily the cause of the disease, but more likely the absence of metal is,” Bertini wrote. In that case, the authors surmise, a SOD1 mutation isn’t absolutely necessary to put the protein on a pathological path. “As a consequence, the soluble oligomeric species might represent the precursor toxic species, suggesting a common mechanism for ALS and FALS,” Bertini wrote.

“I think what they’ve done with SOD1 is very pretty. It certainly tells us more about the protein itself,” said Gregory Petsko, also at Brandeis University. However, he said, “I would hesitate to draw as general a set of conclusions as these authors seem to draw.” Mutant SOD1 accounts for only a fraction of FALS cases, and those inherited forms of the disease are vastly outnumbered by sporadic cases. In most people with ALS, TDP-43-containing aggregates, not SOD1 clusters, are the norm. And even among those with SOD1-based ALS, there are more than 100 mutations in the protein that can cause disease. So to extrapolate from a few SOD1 forms to the rest of ALS, Petsko suggested, is a bit of a stretch.—Amber Dance