Though we've known for some time now that the protein nicastrin is a major player in the γ-secretase complex (see ARF related news story), its exact role has remained somewhat elusive. But in last Friday's Cell, Gang Yu, Thomas Sudhof, and colleagues at the University of Texas Southwestern Medical Center, Dallas, report quite a dapper role for nicastrin—it introduces Notch and the Aβ precursor protein (AβPP) to the presenilins and it does so by virtue of its DAP domain. The finding not only helps resolve the burning question of how γ-secretase recognizes its substrates, but it could also open up new therapeutic strategies for preventing production of amyloid-β (Aβ).

Yu had previously shown that nicastrin can bind to γ-secretase substrates (see Yu et al., 2000). To get a better picture of how this happens, first author Sanjiv Shah and colleagues focused on various parts of the transmembrane protein. Using immunoprecipitation experiments, they found that the N-terminal part of nicastrin interacts with C99, the γ-secretase substrate that remains after AβPP's ectodomain is shed through β-secretase cleavage. More specifically, Shah and colleagues found that it is nicastrin's ectodomain that binds to C99 and also to N100, the analogous piece of the signaling molecule Notch.

Shah and colleagues next focused on a portion of nicastrin's ectodomain, the DAP domain, so called because it harbors two highly conserved motifs—a DYIGS amino acid sequence found in nicastrin and its orthologs and a peptidase homologous region. The authors found that a 28-amino-acid region in this DAP domain is needed for γ-secretase activity. Using nicastrin mutants, they also found that one specific amino acid, glutamate 333 (E333), is essential for activity. Replacing this with alanine, arginine, serine, or another dissimilar amino acid abolished activity, whereas conservative replacement with an aspartate had little effect.

Of course, there are many ways to inhibit γ-secretase activity, one being to prevent formation of the core complex, which comprises presenilin (1 or 2), Aph1, Pen2, and nicastrin. However, Shah and colleagues found that while mutating the transmembrane region of nicastrin abolished endoproteolysis of presenilin, a prerequisite for maturity of the complex, E333A mutations had no effect on complex maturation. The results suggest that the DAP domain is not involved in the formation of the complex, but is required for the complex to function, once formed. "These data agree with a model in which assembly of nicastrin, APH-1, presenilin, and PEN-2 precedes presenilin endoproteolysis, which subsequently is required for activation of γ-secretase activity to cleave type I membrane proteins. Moreover, these results provide compelling evidence that [the] nicastrin DAP domain plays a direct functional role in γ-secretase-substrate recognition," write the authors. In support of this, they found that a short peptide that mimics the γ-secretase cleavage site is not cleaved by recombinant γ-secretase made using nicastrin mutated in the transmembrane domain, which fits with the essential role of this region in complex assembly. In contrast, recombinant secretase made with the E333A mutant of nicastrin did cleave the peptide mimic, bolstering the idea that the ectodomain of nicastrin is involved in recognizing larger γ-secretase substrates (see figure). 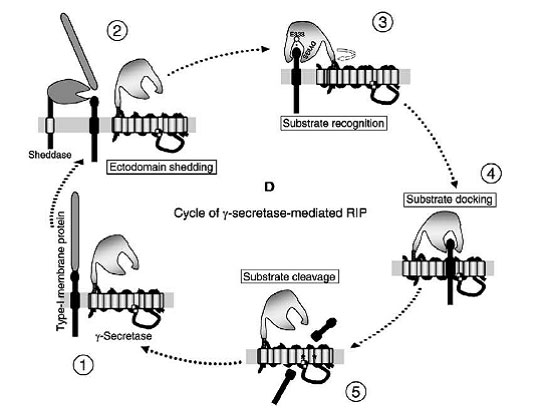 Nicastrin’s Role Recognized
The authors propose a model for regulated intramembrane cleavage (RIP) whereby after ectodomain shedding (2), nicastrin recognizes the remaining stubs on the outer surface of the membrane (3) and then docks them with the catalytic core of γ-secretase (4), setting up the substrates for cleavage (5). [Image courtesy of Cell Press]

While these results shed more light on the role of nicastrin and the functioning of γ secretase, they also might lead to novel therapeutics. Shah and colleagues found, for example, that a free amino terminus is a prerequisite for cleavage by γ-secretase. When the authors blocked the N-terminal of C99 with an antibody, proteolysis was prevented. While an antibody obviously adds considerable bulk to the N-terminus of C99, the much smaller biotin and fluorescein moieties also blocked cleavage when attached to the N-terminus, raising the possibility that small molecules that bind to the extracellular head of C99 could prevent formation of Aβ.—Tom Fagan