Last week, both ends of the nerve growth factor (NGF) research spectrum advanced by a step. On its fundamental science, an article in Science describes the crystal complex of NGF with one of its receptors, p75, while on the applied front, the American Academy of Neurology conference in San Francisco saw the efficacy report of a clinical trial involving transplantation of NGF-producing cells into the brains of Alzheimer's patients.

Since 2000, a team of investigators led by Mark Tuszynski of the University of California, San Diego, has been conducting a pilot clinical trial of direct and chronic delivery of NGF to the human basal forebrain in an effort to rescue cholinergic neurons. For details on the study design, as well as early methodological problems that led to one death, see ARF related news story. 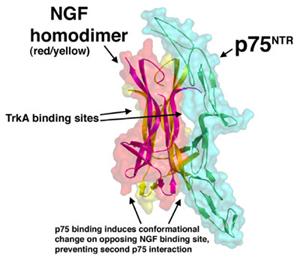 NGF molecules occur as pairs, but they do not bind to a pair of receptors. Instead, when two NGF molecules together bind to a single p75 receptor, they undergo a conformational change illustrated in this crystallographic study. Photo credit Science Magazine.

In his AAN presentation, Tuszynski reported a nearly 50 percent reduction in the rate of cognitive decline in the six ongoing trial patients compared to how quickly they had deteriorated before entering the trial. This included two patients who actually improved on cognitive tests during the period six to 18 months post-surgery, when the researchers assume that NGF production has stabilized. For more on this trial and the larger question of its use in treating AD, see Q&A with Mark Tuszynski below. A larger clinical trial, to include a control group that receives sham surgery, is planned and will be led by David Bennett and Zoe Arvanitakis of the Rush University Medical Center in Chicago.

At the other end of the spectrum, first author Xiao-Lin He and Chris Garcia of Stanford University in Palo Alto, California, described in the May 7 issue of Science how NGF complexes with the p75 receptor. Understanding neurotrophin signaling is a complex proposition, since NGF and its compatriots BDNF, NT-3, and NT-4 bind both to the p75 receptor and to members of the tyrosine kinase receptor (Trk) family. "These ligand-receptor interactions produce a dazzling array of effects, lasting from milliseconds to days, that influence neuronal cell plasticity and survival," note Niccollo Zampieri and Moses Chao of New York University in their accompanying editorial.

Unexpectedly, the scientists found that NGF, which normally travels in pairs, does not double-date. Rather than complexing with a p75 receptor dimer, the paired NGF molecules undergo a conformational change as they bond with one p75 receptor. This bonding occurs at p75's extracellular cysteine-rich domains. It appears that this 2:1 NGF/p75 complex could go on to further associate itself with other proteins, such as LINGO, the Nogo receptor, or perhaps the novel neurotrophin receptor sortilin, according to Zampieri and Chao. The Stanford researchers suggest that the conformational change seen in NGF during this bonding may occur in other neurotrophins, as well.—Hakon Heimer

Q: Are these the same patients you reported on at the Society for Neuroscience conference in 2002? If so, how long have you followed them now?

A:These are the same patients, and they have now been followed for a period ranging from 1.5 to 3 years.

Q: What were your main findings in the present report?

A:There are three main findings that we reported at the AAN meeting:

a) Compared to their preoperative rate of decline, patients exhibited about a 40-50 percent reduction in their rate of decline on the MMSE and ADAS-Cog scales. In the time period from 6 months to 18 months after treatment with NGF gene delivery, two of six patients showed an actual improvement in mental function, one showed no decline in function, two worsened only mildly, and one continued to show a typical AD rate of worsening. This time period of 6-18 months after treatment corresponds to a time when we expect that good NGF production is present and sufficient time has passed to allow NGF to "remodel" and stimulate the cholinergic neurons.

Over the full two-year period of follow-up, patients overall showed about a 40-50 percent reduction in their rate of decline. By comparison, the currently approved AD drugs only reduce decline by about 5 percent, and sustain this effect for about six months.

c) One subject who came to autopsy showed a significant cell growth effect to the NGF.

Q: Will you soon start a larger trial with the same methodology?

A:The caveat to interpreting our results is that the number of studied patients was small, and there was no placebo group. We will therefore move on to a larger trial using AAV-NGF gene delivery, and will include sham-treated patients. If this magnitude of effect holds up in the phase II and III trials, this treatment would represent a substantial improvement over existing AD therapies.

Q: I've read that you are also planning a viral approach to delivering NGF levels. Can you tell us what this entails and what progress you've made?

A:The trial we just reported did use a viral approach, but the viral vector genetically modified the patient’s cells in the culture dish. In the next phase of the clinical trial, we will genetically modify neurons in the brain directly using the AAV-vector system. Hypothetically, this system should result in a longer duration of NGF production (possibly as long as 4.5 years or longer); this is based on non-human primate studies. Hence, the next phase of this program is simpler, and potentially could be more effective.

Q: Would you agree that your results support the need for a vigorous effort to find non-surgical ways to deliver neurotrophic factors to the cholinergic system? Are there any avenues that you consider especially promising?

A:Growth factors have enormous potential to prevent cell death in the brain, and therefore to treat a variety of neurodegenerative disorders including AD, Parkinson's disease, ALS, Huntington's disease, and others. However, the key problem in using growth factors in neurological clinical trials has been in delivering them to the brain. Effective delivery will require two important things: 1) reaching targeted neurons in the brain at doses of the growth factors that are sufficient to stimulate neuron function and prevent cell death, and 2) restricting delivery of the growth factor to just the degenerating cells.

If growth factors are delivered to the CNS indiscriminately, i.e., in a non-targeted fashion, then toxic side effects occur that render them not useful. Hence, my great concern, and the concern of many neurobiologists who use growth factors in models of neurological disease, is that peripherally administered growth factor agonists or small peptides will cause toxicity because they will not be site-directed. At present, there are really only two ways of getting growth factors delivered effectively to vulnerable cell groups in the brain: gene delivery, or direct infusion of growth factors into the brain parenchyma (the actual tissue of the brain, as opposed to the fluid system of the brain). Any non-targeted system will likely cause weight loss, Schwann cell growth into the CNS, and possibly pain or nausea, as reported with trials of NGF, GDNF and CNTF.

One of the successes of our phase I trial is that we can indeed sustain delivery of NGF into the brain for an extended time period, and do so safely.

Harnessing the power of growth factors has significant implications for developing more effective treatments for neurological disease. However, this must be done in a practical and cautious manner. Delivery is key to the effective implementation of growth factors in the clinic: central delivery across the blood-brain barrier, and restricted delivery to specific brain regions, is required. As the program moves forward, we will see if our method is indeed effective. I have worked with growth factors for nearly 20 years, and after testing a number of different delivery methods, including protein infusions and small peptide analogs administered peripherally, I have settled on gene delivery as the approach most likely to prove fruitful and practical for testing in human disease.

Mark Tuszynski is cofounder of Ceregene, a biotech company that aims to develop gene therapies for neurologic diseases.