In the search for what makes Aβ turn rogue and start gumming up the brain, a paper in the September 8 Neuron fingers a novel suspect. Researchers led by Michael Heneka at the University of Bonn, Germany, report that modifying human Aβ by adding a nitro group enhanced the peptide’s tendency to aggregate. Heneka and colleagues saw nitrated Aβ at the core of amyloid plaques in both human and mouse Alzheimer’s brains. In addition, nitrated Aβ was able to seed plaques in AD model mice, whereas the non-nitrated form could not. Regardless of its aggregation state, nitrated Aβ also damaged synaptic function and memory in mice. When the researchers blocked a nitration pathway in these animals, the plaque load dropped and learning ability returned to normal. The results suggest a potential new pathway for intervention in AD pathology, although it remains to be seen if the results will hold up across labs and translate to people.

The findings further link inflammation to amyloid pathology. Inflammation has been shown to turn on the production of nitric oxide synthase 2 (NOS2) in neurons, astrocytes, and microglia (see, e.g., Vodovotz et al., 1996; Heneka et al., 2001; and Fernández-Vizarra et al., 2004). NOS2 then catalyzes the formation of nitric oxide (NO), which leads to protein nitration. With the new finding that nitrated Aβ can seed plaques, this suggests that inflammation is not merely a side show in AD, but can “accelerate and drive the degenerative pathology,” Heneka told ARF. Intriguingly, a recent study showed that Aβ aggregates can increase the formation of NO (see Du et al., 2011). In addition, amyloid plaques are known to stimulate glial cells, leading to more NOS2 production, in what could be a vicious cycle that might help spread the disease through the brain, Heneka suggested.

To investigate this, first author Markus Kummer showed that Aβ can be nitrated at tyrosine residue 10 in vitro, and that nitrated Aβ clumps together more readily than the normal form does. Kummer and colleagues developed an antibody that specifically recognizes the nitrated form of Aβ. In both human brains and in APP/PS1 transgenic mice, the antibody labeled the core of amyloid plaques. In mouse brain, the nitrated core did not grow in size over several months, but non-nitrated Aβ continued to glom onto the plaque, suggesting the nitrated form might act to seed plaques. In support of this, when the researchers injected either nitrated or non-nitrated Aβ into mouse brains and looked eight weeks later, only the mice that had received nitrated Aβ had numerous small plaques scattered through their brain tissue. 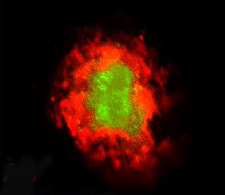 Other evidence suggests a key role for nitration in kicking off amyloid aggregation, Heneka told ARF. “All mammals who develop Aβ plaque deposition carry a tyrosine at position 10,” Heneka said, citing primates, chickens, and guinea pigs as examples. Mice and other mammals that do not get plaques have a different amino acid at that position and their Aβ cannot be nitrated, Heneka said. Likewise, synthetic, unmodified Aβ does not initiate amyloidosis in brain, but Aβ from brain extracts does (see ARF related news story on Eisele et al., 2009). In future work, Heneka would like to generate a transgenic mouse that carries rodent Aβ modified to have a tyrosine at position 10, and see if these animals develop amyloid deposits.

Kummer and colleagues also looked at what happened when they reduced protein nitration by knocking out or enzymatically inhibiting NOS2. APP/PS1 mice without NOS2 had a lower plaque load than normal APP/PS1 mice, and their spatial memory deficits disappeared. Memory improved even in young AD mice that did not yet have plaques, Heneka told ARF. The protective effect may be mediated through synapses, the authors suggest, as blocking NOS2 also rescued long-term potentiation (LTP) in both young and old APP/PS1 mice. In wild-type hippocampal slices, nitrated Aβ reduced LTP more than regular Aβ did.

The results agree with a previous study led by Flint Beal at Weill Cornell Medical College, New York City, that found less AD pathology in crossbred Tg2576 and PS1 mice when they were crossed with NOS2 knockouts (see Nathan et al., 2005). However, the findings contrast with studies by Carol Colton and Mike Vitek at Duke University, Durham, North Carolina, and David Wink at the National Cancer Institute, Bethesda, Maryland, who reported that knocking out NOS2 worsens Aβ pathology and memory in several mutant APP mouse models (see ARF related news story on Colton et al., 2006; ARF related news story on Wilcock et al., 2008; and Colton et al., 2008). The main difference between the models used by these groups is the presence of mutant presenilin, which points to it as the reason for the differential response to the nitric oxide environment, Colton and colleagues wrote to ARF (see full comment below). This is important because mutated presenilin is present in less than 1 percent of human AD cases. Colton and colleagues also point out that NOS2 and NO have diverse biological effects, many of them beneficial for cell growth and survival, and that nitration can occur through routes other than NOS2, raising the question of whether NOS2 inhibition is the best route for preventing Aβ nitration.

However, Heneka notes that a previous study found that NOS2 deletion in wild-type mouse hippocampal slices protected synapses from Aβ-mediated damage (see ARF related news story on Wang et al., 2004), suggesting the strategy could be beneficial even in the absence of presenilin mutations. The NOS2 inhibitor that Heneka’s group used, L-NIL, has been tested in humans as a possible anti-asthmatic (see Hansel et al., 2003), and shown to enter the mouse brain (see Rebello et al., 2002). Heneka would like to do human trials, but has no funding yet. Meanwhile, he is testing vaccination against nitrated Aβ in mice. Current human vaccination approaches may not clear nitrated Aβ, Heneka believes, speculating that the absence, to date, of reported cognitive improvement despite evidence of brain Aβ removal might be due to the continued presence of this newly proposed villain.—Madolyn Bowman Rogers