Conventional wisdom says that Down syndrome (DS) goes hand-in-hand with intellectual disability—but what if that was not true? Two recent papers suggest that a treatment for the cognitive deficits of Down syndrome may be more than just a pipe dream. Both studies find that Aβ, a potentially toxic peptide that is a major contributor to Alzheimer disease (AD), not only plays a key role in Down syndrome, but does so quite early in the disease. In a paper published June 3 in PLoS One, scientists led by Paul Greengard of The Rockefeller University, New York, revealed they could reverse learning deficits in a Down syndrome mouse model by lowering the levels of soluble Aβ in the brains of young mice. In another paper, reported May 20 in the same journal, researchers led by Lee Goldstein of Boston University, Massachusetts, reported that the characteristic cataracts seen in Down syndrome are composed of Aβ aggregates, and these cataracts may be one of the earliest signs of Aβ accumulation in a person with DS. Together, these studies hold out promise that scientists might find early diagnosis and treatment options for the cognitive deficits of Down syndrome.

There is a growing recognition that Down syndrome and AD share some common ground. People who have DS are at increased risk of developing AD late in life, most likely due to triplication of AD-associated genes on chromosome 21, in particular APP, the precursor to Aβ. Few experiments, however, have looked at the effects of APP overexpression and Aβ accumulation in people with Down syndrome early in life.

To examine the effect of early interventions, first authors William Netzer and Craig Powell made use of Ts65Dn transgenic mice, considered the gold standard of Down syndrome models. These mice carry a trisomy that is analogous to DS trisomy, including a triple copy of the APP gene, and show cognitive deficits by two to three months of age. The authors reasoned that since the γ-secretase inhibitor DAPT, which reduces Aβ levels in the brain, rescues cognitive deficits in the Tg2576 AD mouse model (Comery et al., 2005), DAPT might also have an effect on Down syndrome mice.

The authors treated four-month-old Ts65Dn mice with DAPT. After four days, levels of Aβ in the cortex were reduced to about 65 percent of control, as measured by Western blot analysis. More intriguingly, DAPT treatment also rescued the cognitive deficits of the Down syndrome mice, as determined by testing spatial learning and memory in the Morris water maze.

The improved learning was most likely due to the reduction in soluble Aβ levels, Netzer said. He noted that in the Tg2576 AD mice, DAPT improved cognition in as little as three hours, which is the amount of time required to reduce soluble Aβ levels by half. Soluble Aβ oligomers are widely considered to be the most toxic species, and Netzer speculated that oligomers may be the culprit in the young DS mice, even though the researchers did not directly measure oligomer concentration. “When you reduce Aβ production, effectively you’re reducing the concentration of Aβ, and oligomerization is in part a concentration-dependent phenomenon,” he said.

The authors plan to investigate how soluble Aβ might decrease cognitive abilities in Down syndrome. Since Aβ reduces excitatory synaptic transmission in the brain by encouraging removal of NMDA and AMPA receptors from the synapse (see ARF related news story on Snyder et al., 2005 and ARF related news story on Hsieh et al., 2006), the authors will examine the concentration of glutamate receptors at synapses in DAPT-treated and -untreated Down syndrome mice, and look for correlations with cognitive deficits. They also want to examine other physical changes in the brain such as spine density, Netzer said.

The clinical implications of this finding are exciting, as they suggest that at least some cognitive deficits in children with Down syndrome might be reversible with treatment. Because DAPT has toxic effects when taken long-term, however, there is no immediate clinical application for these results. “My prediction,” Netzer said, “is that once a safe Aβ-lowering drug is developed [for AD], I think people will take that into the clinic for Down syndrome adults and children.” Other γ-secretase inhibitors are currently the subject of intense investigation and clinical trials in the scientific community (see ARF related news story and ARF news story).

This study is admirable for its combination of simplicity and significance, noted Huntington Potter of the University of South Florida, Tampa. He cautioned, however, that there are several possible explanations for the results other than simply concluding that Aβ is solely responsible for cognitive deficits. “To us, the most likely is that in mice, Aβ plays a critical role in microtubule function, and that too much (or maybe even too little) changes microtubule-dependent localization of key receptors,” Potter wrote in an e-mail. “Alternatively, the inhibitor DAPT may have more extensive beneficial effects than only reducing Aβ production.”

The paper by Goldstein and colleagues takes a different approach, examining the molecular composition of cataracts in the eyes of people with Down syndrome. Their results suggest the eye is not just the window to the soul, but a window to the brain.

Their research builds on their earlier work, showing that the unique cataracts that develop in people with late onset AD consist of aggregated Aβ deposits (Goldstein et al., 2003). These AD cataracts, called equatorial supranuclear cataracts, occur in a ring around the periphery of the eye, rather than in the center, and are unrelated to normal age-related cataracts.

Scientists have known for over a hundred years that distinctive cataracts also occur in the eyes of people with Down syndrome, but the composition and cause of these cataracts have been a mystery. First authors Juliet Moncaster, Roberto Pineda, and Robert Moir examined postmortem lens specimens under a microscope to confirm that DS cataracts had the same physical properties and appearance as late-stage AD cataracts. The authors then demonstrated that these cataracts contained Aβ peptides by staining with Congo red and anti-Aβ antibodies. They used mass spectrometry to directly confirm the presence of Aβ peptide in lens extracts. Finally, they showed in vitro that soluble Aβ induces the major protein of the lens, αB-crystallin, to form aggregates consistent with those seen in Down syndrome cataracts. All of their results indicate that DS cataracts are indistinguishable from the cataracts seen in late onset AD. 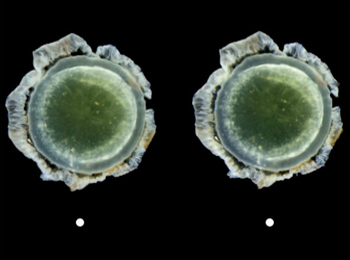 One of the noteworthy features of these DS cataracts is that the first molecular changes appear very early, before the age of two, or perhaps even earlier. This is long before Aβ accumulation becomes apparent in the brain, Goldstein said, which implies these cataracts could provide a very sensitive preview of processes occurring in the brain. Another intriguing finding is that, although Aβ accumulation increases with age, the rate of deposition varies greatly among individuals. Goldstein suggested that by correlating the rate of Aβ deposition in the eye with a person’s genotype, it might be possible to discover genes that modify Aβ expression, which could have implications beyond Down syndrome.

The potential for a clinical diagnostic tool is one of the most exciting aspects of this work. The authors developed a custom laser-based eye scanner, Goldstein said, that can non-invasively detect the earliest eye changes in Down syndrome. Long before DS end-stage cataracts form, the eyes develop intracellular Aβ deposits in the fiber cells of the lens. These deposits are smaller than the wavelength of light, and so scatter light in a characteristic fashion that can be used to diagnose their presence.

The next step in this research would be to conduct clinical trials to validate the technique’s usefulness as an early diagnostic, Goldstein said, a possibility he is actively investigating. He said that people with Down syndrome who have accelerated Aβ deposition are most likely to benefit from any new therapies that might become available. “There’s reason to be optimistic that we can halt or at least slow the progression of the AD component of the disorder,” Goldstein said. He is also hopeful that in the future, eye scans might be useful for therapeutic monitoring, as a non-invasive way to track whether a treatment is successfully reducing Aβ levels in the brain.

The work reported in these two papers is complementary, Goldstein added, because diagnosis and treatment are flip sides of the same coin. To intervene in a disease such as Down syndrome, you need both an early detection method and an effective treatment. There are more indications than ever before that a day is coming when we could have both.—Madolyn Bowman Rogers