With recent trial failures dashing hopes for treating Alzheimer’s with γ-secretase inhibitors (see ARF news story and ARF news story), scientists are redoubling efforts to develop compounds that tweak this enzyme’s activity rather than stymie it altogether. γ-secretase modulators, as they are called, shift where the enzyme trims amyloid precursor protein (APP) so as to generate less Aβ42 while preserving total output of Aβ and APP’s C-terminal fragment. An August 2 Nature Communications paper lends further credence to this strategy. Using mass spectrometry and biochemical approaches, researchers led by Patrick Fraering of the Swiss Federal Institute of Technology, Lausanne, Switzerland, showed that γ-secretase modulators curb cleavage of APP and another substrate, Notch, at the so-called γ site, without stifling production of intracellular signaling molecules derived from ε-site cleavage, which occurs a few amino acids closer to the C-terminus of these substrates. The work supports the contention that γ-secretase modulators “do not have the harmful side effects caused by γ-secretase inhibitors,” Fraering told Alzforum. In contrast, the scientists reported that several APP mutations linked to familial AD (FAD) enhance cleavage at both γ- and ε-sites, yet the γ-secretase modulators still worked in these FAD mutants, suggesting the compounds may succeed in people with familial as well as sporadic forms of AD.

According to the sequential processing model of intramembrane proteolysis, γ-secretase slices the transmembrane portion of APP first at the ε-sites yielding APP intracellular domain (AICD) 49-99 and AICD 50-99, then at the γ-sites to generate Aβ peptides— typically more Aβ40 than the deadlier Aβ42. Gamma-secretase processing of Notch occurs in similar fashion, and research blames loss of intracellular Notch fragments for the gastrointestinal and skin defects linked to γ-secretase inhibitors (see model below). 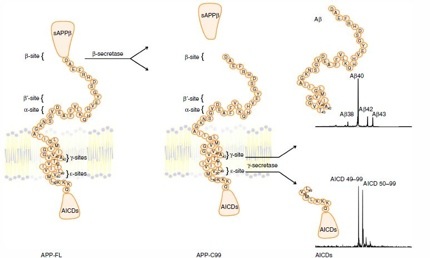 In the current study, lead author Mitko Dimitrov and colleagues analyzed γ-secretase processing of APP or Notch in the absence or presence of γ-secretase modulators (GSMs). They purified active γ-secretase from mammalian cells (see Alattia et al., 2013), mixed in APP or Notch tagged with the Flag peptide for tracking, and added either a control solution or one of two second-generation GSMs. One GSM was a non-steroidal anti-inflammatory drug (NSAID)-like compound (GSM-1) developed by Merck. GSM-1 binds γ-secretase allosterically (see ARF news story) and improves cognition in AD transgenic mice (Mitani et al., 2012). The other GSM was a non-NSAID-like molecule (E2012) developed at Eisai. Neither is in clinical development at present, though the Eisai compound had previously reached Phase 1 before eye problems in the treated group stopped that trial (see ARF conference story)

Mass spectrometry of the reaction products showed that both GSMs bumped up Aβ38 levels and lowered Aβ42, yet left intracellular ε-cleavage fragments unchanged for APP and Notch. Though prior studies had already suggested that GSMs spare ε-site processing (see McKee et al., 2013; ARF related news story), the mass spectrometry data was “a nice way to show it unequivocally and with detail that was not present in the other papers,” said Barbara Tate, a biotech consultant in Cambridge, Massachusetts. Tate was formerly vice president of Satori Pharmaceuticals, which had been developing γ-secretase modulators for AD before closing down in June (see ARF news story).

The present study also revisits an older theory associating neurotoxicity with intracellular APP fragments, and Fraering said this could explain what makes some FAD mutations in APP especially dangerous. In the cell-free γ-secretase assay, APP with transmembrane FAD mutations T714I and V715A not only increased Aβ38/40 and Aβ42/40 ratios relative to wild-type APP, consistent with previous work (Chávez-Gutiérrez et al., 2012), but mass spectrometry revealed skewed ε-processing that heavily favors the AICD 49-99 fragment. “AICD 50-99 is totally gone,” Fraering said. This indicates that transmembrane FAD mutations in APP affect not only γ- but also the ε-sites. “The combination of higher Aβ42/40 ratio and the loss of AICD 50-99 can explain the extreme aggressiveness of the [T714I and V715A] APP mutations with regard to the onset of the disease,” the authors write. Prior mouse studies have implicated expression of C-terminal APP fragments in brain amyloidosis and neurodegeneration (see Kammescheidt et al., 1992; Oster-Granite et al., 1996).

Finally, to learn more about how GSMs work at a molecular level, Dimitrov and colleagues used computer-based simulations to model how FAD mutations affect the structure of APP in lipid membranes. They found that the mutations tilted APP’s orientation in the membrane in a manner that leaves the Aβ38 cleavage site more exposed. This provides a potential explanation for the elevated Aβ38 levels associated with the T714I and V715A APP mutants, Fraering said. "It remains largely unknown whether higher Aβ38 is protective," he told Alzforum. "To the best of my knowledge, nobody has ever demonstrated that Aβ38 is protective. Only that reduced Aβ42 is"

All told, the new data “support that GSMs are a viable therapeutic approach,” Tate said. “They are more like lasers than sledgehammers.” However, she said, the molecular modeling suggests that drug developers will continue to struggle, since critical APP domains “are embedded in the membrane in a way that makes them difficult for small molecules to reach.”

Yasuyuki Mitani of Astellas Pharma Inc., Tsukuba, Japan, was intrigued by the possibility that impaired intracellular APP processing could explain why some FAD mutants are especially harmful. However, he worries that the cell-free assay with exogenous APP is artificial and wonders if the findings can be reproduced in cellular or in vivo studies. Steve Wagner of the University of California, San Diego, expressed similar concern, noting that the V717F APP mutation did not increase the Aβ42/40 ratio in the present study. That was “a big red flag,” he said, because it disagrees with previous work showing that mutations at this site do drive up relative Aβ42 levels in cells (Suzuki et al., 1994), AD transgenic mice (Esh et al., 2005), and patient fibroblasts (Scheuner et al., 1996). The current findings “need to be extended to a more physiologically relevant system,” Wagner said.