Cerebrovascular disease is a major risk factor for Alzheimer’s dementia, but how many of the millions of blood vessels in the brain need to be damaged before cognition suffers? In rats, just one, according to a study published December 16 in Nature Neuroscience. Using two-photon microscopy to identify arterioles and venules in the somatosensory cortex, researchers led by David Kleinfeld, University of California, San Diego, induced clots in individual vessels. That was enough to weaken the rats’ decision-making during a behavioral task. A shot of the Alzheimer’s drug memantine alleviated the cognitive defects and associated tissue damage. Though it is not known if single clots would cause similar damage in people, the findings offer hope that the problems may be treatable. In a similar vein, a mouse study in the December 12 Journal of Neuroscience shows that neurons die considerably more slowly after mini-strokes than after larger ones, suggesting there might be time to intervene therapeutically. Maiken Nedergaard of the University of Rochester Medical Center, New York, led that work.

The brains of many people with dementia teem with small lesions, called microinfarcts, reflecting tissue damage from occluded blood vessels. Moreover, epidemiological research links vascular injury with heightened risk for Alzheimer’s disease, and a recent study found faster cognitive decline in people with particles clogging their cerebral arteries (ARF related news story on Purandare et al., 2012). However, researchers were unsure if such obstructions cause cognitive impairment or simply coexist with it. To find out, first author Andy Shih and colleagues clotted single vessels in the brains of live rats and looked for effects on neuronal function and behavior. Previously a postdoc in Kleinfeld’s lab, Shih is now an assistant professor at the Medical University of South Carolina, Charleston.

Visualizing subcortical blood vessels and cells in anesthetized rats (Shih et al., 2012), the researchers identified the neurons that respond to sensory signals from the animals' whiskers. Rats use these tactile sensors to make navigational judgments, including whether to jump across a gap for a reward. After training rats to do just that, the scientists induced lesions at individual microvessels (see image below) near the responsive neurons. They used photosensitive molecules that produce free radicals under laser light (Schaffer et al., 2006). Less than a week later, the rats “could no longer make a jump/no-jump decision based on whisker touch,” Kleinfeld told Alzforum. Brain tissue surrounding the blocked vessel became hypoxic and increasingly unresponsive to hindlimb stimulation, as evidenced by calcium waves reflecting runaway activity of dying neurons. 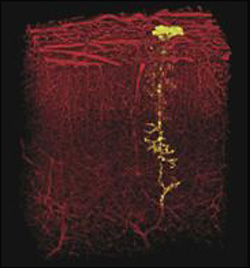 Little Clot, Big Trouble
A single arteriole (yellow) dives from the brain surface to penetrate a column of brain tissue. Blocking just one such vessel can harm the brain and lead to cognitive defects. Image courtesy of David Kleinfeld Lab, UC San Diego

Some scientists think the rat model has potential implications for microinfarcts in people. “The findings suggest that microinfarcts may not be so silent,” noted William Van Nostrand of Stony Brook University Medical Center in New York. “Although there may not be overt signs of impairment, subtle deficits could occur, accumulate, and, over time, manifest as vascular cognitive impairment,” he said.

It is hard to tell how these findings will translate to humans. The rat experiments examined consequences of a single manipulation in healthy animals; however, most human studies involve people who are already quite compromised. It is challenging to draw conclusions with so many comorbidities, Kleinfeld noted. Furthermore, the rat cortex has nearly three times as many venules as arterioles, whereas the ratio is opposite in the human brain.

Regardless, Kleinfeld thinks the silver lining in this study was the memantine findings. When the rats were injected with memantine or another NMDA-type glutamate receptor antagonist (MK-801), fewer neurons died. By blocking NMDA receptors, these compounds protect neurons from excitotoxic damage. “Instead of a dead cylinder of cells roughly a half-millimeter wide, we saw just a small scar about 100 microns in diameter,” Kleinfeld said. Cognitive deficits were milder as well.

Could these drugs protect people with cerebrovascular disease? Although they showed no benefit in clinical trials for large ischemic strokes, “perhaps they may prove more efficacious for limiting microinfarct damage,” Van Nostrand wrote in an e-mail to Alzforum (see full comment below).

The Journal of Neuroscience report lends support to that idea. Nedergaard used a mouse model of multiple microinfarcts (Rapp et al., 2008), which the scientists think may be more representative of what is going on in the brains of people with vascular disease. First author Minghuan Wang and colleagues found that neuronal death progresses slowly over 28 days or more. "This is remarkably different from regular stroke, were the damage is done within hours,” senior author Nedergaard wrote in an e-mail. This suggested to him that the mechanism of neuronal loss differs and, “most importantly, that the therapeutic window is much longer [for mini-strokes].”—Esther Landhuis