While "pea brain" is hardly a flattering moniker, a pea-sized brain in a petri dish has just earned high praise. Researchers led by Jürgen Knoblich, Austrian Academy of Science, Vienna, report in the August 29 Nature that they grew miniature 3D brain-like structures from human stem cells (see image below). Though not an exact miniature, these cerebral "organoids" do mimic crucial features of the human brain in ways that animal models cannot. The organoids will help scientists study brain development and could one day be used to study neurodegeneration, Knoblich said at a Nature press conference. 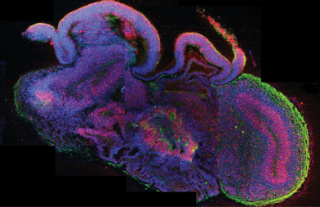 To overcome the limits inherent in animal models of brain development, scientists have tried to create something closer to human brains in the lab. Some successfully grew pieces of neural tissue, such as an optic cup (see Eiraku et al., 2011), a pituitary gland (see Suga et al., 2011), or cortex-like cell layers (see Nasu et al., 2012). However, nothing has come close to capturing the complexity of the entire brain. First author Madeline Lancaster and colleagues capitalized on the capacity of stem cells to self-organize. Rather than apply a complex cocktail of growth factors to persuade cells to adopt specific roles, the researchers simply provided the cells with a matrix and good growth conditions, then let them do their thing.

The researchers began by generating embryoid bodies from either human embryonic stem cells or induced pluripotent stem cells. After 6 days, they cultured these embryoids in media that fosters neuroepithelial tissues. On day 11 they transferred them to droplets of a gelatinous protein mixture that formed a three-dimensional scaffold on which to grow the cells. Four days later, they transferred these complexes to a rotating chamber, which gently agitated them to allow optimal nutrient and oxygen uptake.

Over a span of about a month, 4-millimeter-wide cerebral organoids arose that looked roughly similar to a nine-week-old developing human brain and mimicked its developmental trajectory. At 16 days, antibodies to neuroanatomical markers revealed a few distinct regions, such as forebrain and hindbrain. Later, the organoids developed more defined structures suggestive of the cerebral cortex, retina, hippocampus, meninges, and choroid plexus. The innermost cortical layers churned out new neurons that migrated outward, much like in human brain development (see image below). The organoids also sported unique stem cells called outer radial glia, absent in mice, which act like amplifiers to produce the many neurons necessary for large brains. Calcium dye imaging revealed activity in the neurons. 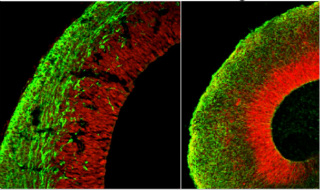 Cerebral organoids may be useful for studying disorders of human brain development, said Knoblich. As an example, the authors created organoids from the skin cells of a patient with microcephaly, a developmental disorder in which children have a small brain and head. Lancaster and colleagues noticed that organoids from these patients appeared smaller and neurons formed prematurely compared to other organoids. Neural progenitors that would normally contribute to brain growth depleted rapidly, as well. Close observation revealed that in dividing radial glia, the mitotic spindles were abnormally oriented, a roadblock to successful cell division.

In future, cerebral organoids could benefit studies of schizophrenia and autism, Knoblich said. The models could also aid in tests of new pharmacological agents, allowing researchers to bypass animal experiments and get results that are more translatable to humans. What's more, researchers could knock out select genes in organoids to analyze the effects on early brain development. While the circuits are too immature to study the connectivity seen in the adult brain, Knoblich said that these structures could one day be used to study neurodegeneration. So far, they have survived up to 12 months in the lab.

"The potential applications of such an in vitro-model are fascinating," wrote Oliver Brüstle, University of Bonn, Germany, in an accompanying News and Views editorial, lauding the mini-brain’s potential use in studies of neurodevelopment and its disorders. However, Bruestle agreed with the authors that these tiny models lack crucial features that would make them complete mini-brains. For starters, the various distinct regions are jumbled. Further, without a circulatory system, the organoids only get nutrients to their outsides, stunting overall growth and starving the inner core. In addition, the cells resembling cortical layers do not differentiate into the complex six-layered structure of the real cortex. Knoblich said his team will next strive to encourage more cortical layers to form in these models.—Gwyneth Dickey Zakaib.
References:
Lancaster MA, Renner M, Martin C, Wenzel D, Bicknell LS, Hurles ME, Homfray T, Penninger JM, Jackson AP, Knoblich JA. Cerebral organoids model human brain development and microcephaly. Nature. 2013 Aug 29;500(7464). Abstract