Functional imaging may be a promising way to detect decline in Alzheimer’s and other neurodegenerative diseases, but can it detect those early synaptic deficits that are known to occur before neurons die? In the October Archives of Neurology, Scott Small and colleagues at the Taub Institute for Research on Alzheimer’s Disease and Columbia University, New York, report that functional magnetic resonance imaging (fMRI) detects similar deficits in both AD brain and AD mouse models that have no neuronal loss. “The study shows that fMRI is sensitive to cell sickness and not just cell death,” said Small in an interview with ARF.

That sentiment is echoed by Sterling Johnson and colleagues at the University of Wisconsin School of Medicine, Madison. Reporting in this month’s Archives of General Psychiatry, these researchers found that middle-aged, cognitively normal adults with a family history of AD show reduced brain activation in a self-appraisal test. This particular task challenges parts of the brain that are vulnerable in AD, including the hippocampus and the posterior cingulate. “Our data are entirely in keeping with the idea that deficits occur before cell death, since we did not find any brain atrophy in this study,” said Johnson. Together, the two studies support the idea that functional deficits can be detected, at least in specialized research settings, before neuronal loss.

Small and colleagues have spent 7 years devising a functional imaging platform that would give the same readout in mice and in humans. “That would greatly expand our experimental power,” he said. The requirements for such a platform are threefold. It should be sensitive to function, give high spatial resolution, and be applicable to both animal and human MRI. Of the four variables most commonly used for functional imaging—glucose metabolism, cerebral blood flow, deoxyhemoglobin, and cerebral blood volume—the researchers found that only the last fits the bill with current technology. The researchers have optimized this approach for primate and mouse brains, using, respectively, intravenous and intraperitoneal injections of gadolinium contrast agents. In the current study, first author Herman Moreno and colleagues applied the technique for the first time to humans and to J20 transgenic mice, which express human amyloid-β precursor protein (APP) with Swedish and Indiana mutations. As these mice age, they accumulate Aβ plaques but remain free of neurofibrillary tangles and neuronal loss (see Mucke et al., 2000).

Moreno and colleagues imaged 11 patients with probable AD and the same number of age-matched controls. The researchers obtained cerebral blood volume (CBV) maps of the whole brain, but paid particular attention to the hippocampus, the site of early degeneration in AD. Using anatomical criteria, Moreno and colleagues identified four hippocampal subregions: the entorhinal cortex (EC), dentate gyrus, CA1 subfield, and the subiculum. Analysis of variance showed that the AD patients had significantly reduced CBV in the entorhinal cortex; they also performed more poorly in cognitive tests, including hippocampal-dependent tests of memory.

Next the researchers turned to the mouse brains. Using the same technique, they imaged normal and transgenic mice at different ages to develop a timeline of functional decline. CBV in the entorhinal cortex, dentate gyrus, and the CA1 subfield were mapped (the subiculum gave unreliable signals). Again, the researchers found that reductions in the EC were dominant in the transgenic mice, beginning at about 6 months. Blood volume reductions spread throughout the hippocampus as the animals aged. Interestingly, the researchers were able to reduce EC blood volume loss in transgenic animals by treating them with R-flurbiprofen, a drug in phase 3 clinical testing. This enantiomer of the non-steroidal anti-inflammatory drug S-flurbiprofen is believed to modulate γ-secretase activity and reduce Aβ production.

“Taken together, our studies demonstrate that Aβ-related neurotoxicity in mice is sufficient to cause functional imaging defects as detected by CBV maps of the hippocampal formation,” write the authors. And, because they observed the same spatial pattern of defects in the human and mouse hippocampus (see figure below), they conclude that “the cross-species similarities support the likelihood that the patterns represent the same underlying Aβ-related pathophysiologic mechanism.” That implies that functional decline in humans can occur separately from both neuronal loss and neurofibrillary tangles (though see comment below from Richard Caselli). “This shows, for the first time really, that human functional imaging is sensitive to cell sickness,” said Small. 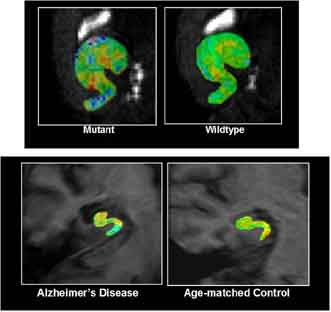 Sterling Johnson and colleagues set out to answer a different question, but their findings are also consistent with the idea that functional deficits precede neuronal loss. “What we wanted to know was whether brain changes could be observed in people with risk factors for AD,” said Johnson. To test this, the researchers turned to BOLD, or blood-oxygenation level-dependent, fMRI, a technique that is now widely accepted as a faithful measurement of neuronal activity (see ARF related news story).

Johnson and colleagues measured BOLD signals while cognitively normal adults, aged 45-62, some with and others without a family history of AD, carried out a self-appraisal test. Volunteers were presented with “trait-adjectives,” such as “daring,” “controlling,” “sharp,” “friendly,” etc., and asked to decide with a simple yes or no if the word described them. The authors chose to look at self-appraisal for two reasons. The first is anatomical. “This task activates regions vulnerable to AD, including the hippocampus and posterior cingulate, which light up with PIB,” said Johnson. The second reason relates to the picture of AD pathology. “Everyone is focused on memory, and rightly so, but another problem with Alzheimer disease is with executive function, and metacognition could be considered a domain of executive function,” said Johnson. Self-appraisal, which involves reflective thinking about thinking, is a metacognitive function.

Johnson and colleagues found that in people with a family history (at least one parent with AD), the hippocampus and the medial parietal lobe was less active during the test. The finding supports an early study from this group that found people with a family history of AD to have fMRI deficits during a memory-encoding task (see Johnson et al., 2006). “Together, our papers suggest that risk for AD may alter brain function in people who are otherwise very cognitively normal,” said Johnson.

People who are cognitively impaired also show deficits in this test. Earlier this year, the researchers reported a significant correlation between BOLD signals and self-awareness in patients with mild cognitive impairment (see Ries et al., 2007). The researchers reasoned that patients with poor self-awareness might have reduced activity in brain areas that are activated during the self-appraisal task. “AD patients often have reduced insight into their own deficits,” said Johnson. Indeed, patients with the poorest cognitive abilities, as judged by comparing their own assessment of their cognitive skills with their spouse’s assessment, had the weakest fMRI signals.

Do the findings suggest that the researchers have detected signs of early pathology? “I think that is a strong possibility, but we would need to do more research to say for sure,” said Johnson. His group is planning to follow subjects longitudinally, testing them with the memory encoding paradigm. In fact, he is about to carry out a 4-year follow-up with the cohort and hopes to follow them until some might convert to AD, which could take 20 years, he said. Johnson also plans to image that cohort using PIB, which can identify Aβ plaques. Preliminary studies are underway.

Coming back to the question of deficits in the absence of neuronal loss, Johnson suggested that his group’s data are consistent with this idea, since voxel-based morphometry to measure grey matter volume found no differences between people with and without a family history of AD.

One surprising finding, suggested Johnson, is that when corrected for family history, ApoE genotype had no effect, despite the fact that it is the strongest risk factor to date for sporadic AD. “We think that there may be other genes, or gene environmental interactions, that we don’t have a good handle on yet,” he said. Interestingly, several PET imaging showed that ApoE4 carriers have reduced glucose metabolism in brain regions that are affected by AD, including the posterior cingulate (see Reiman et al., 2005). Johnson noted that those studies did not correct for family history, making it difficult to draw direct comparisons with his BOLD fMRI data. —Tom Fagan