You could say biological researchers have been binging on omes this past decade. In February 2001, they finished off the human genome, then proceeded to gorge on the transcriptome and the proteome, not to mention the connectome, secretome, variome, et alia. The Big Three complete the central dogma of molecular biology: The genome encodes the transcriptome encodes the proteome. But that original triad misses some of the most important players in biology, that is, the small metabolites spewed out left and right in the body’s constant, churning cycles of anabolism and catabolism. This means that biochemists were left out of the rush for the earliest omes. Ten years later, they now have one of their own: the metabolome. In the field of neurodegenerative disease, metabolomics offers the hope of blood biomarkers and a better understanding of disease, and scientists are developing a serious appetite for it.

Metabolomics as a research discipline has been around since the 1970s, when biochemists profiled a few hundred metabolites at a time. The field is now coming into its own, with emerging technology capable of collecting and cataloguing the vast dataset encompassing every little metabolite in a particular tissue (read more on the methods of metabolomics in Part 2). The number of NIH-funded grants with the keyword “metabolome” has risen steadily from just one in 2002 to 55 in 2010, and PubMed articles with the same keyword have more than doubled recently, from 212 in 2008 to 517 in 2010.

However, this young field is still more promise than product at this point. The initial experiments merely give scientists a set of oft-unidentified metabolites. These discoveries tease researchers with tantalizing hints, but the following, time-consuming steps of actually identifying compounds and fitting them into biochemical pathways must occur before this research takes on any real meaning.

The central nervous system is poised to receive much of the early metabolomics attention. The psychiatry department at Duke University in Durham, North Carolina, is spearheading a multisite effort to collect and analyze metabolome data from neurological diseases (see Part 2). In the case of Alzheimer’s, scientists have conducted a handful of pilot studies that confirm that metabolism is altered in people with AD and mild cognitive impairment (MCI) (see Part 3). Scientists are also pursuing very early biomarker hunts with amyotrophic lateral sclerosis, Parkinson’s disease, and Huntington’s disease (see Part 4).

What, exactly, is in the metabolome? In short: everything that is not a gene, transcript, or protein. “At the end of the day, all of this has to translate into biochemistry and changes in metabolism,” said Rima Kaddurah-Daouk of Duke University, a leader in the field of metabolomics. “If you have a mutation in a gene, it is going to have an effect on your metabolism.” In addition, people’s metabolomes directly reflect their environment, from the foods they eat to the toxins they meet.

Although it is too early for complete consensus, scientists generally agree that the metabolome encompasses molecules smaller than 1,500-2,000 kilo Daltons in size. As for the size of the metabolome itself, scientists have no grip on that at all: Estimates vary from 2,000 to one million different metabolites. Some are not even of human origin—for example, microbes colonizing our bodies contribute their own small-molecule cocktail to the human system.

The National Institutes of Health invited metabolomics grant applications as a key part of its Roadmap in 2003 (Zerhouni, 2003). In 2004, Kaddurah-Daouk founded the Metabolomics Society to promote the field. The Society now has more than 500 members and publishes the journal Metabolomics.

Right now, doctors in clinical practice already observe some metabolites. But they can only probe a few limited markers—a test for cholesterol here, a measure of glucose or estrogen there, perhaps a standard Chem-7 or Chem-20 panel. It is akin to trying to understand a book by only reading a few torn-out pages. But metabolomics researchers envision a day when your annual blood workup will include panels of hundreds or thousands of molecules, painting a much more complete picture of health. This might allow doctors—with some computational assistance—to pick out signs of disease earlier, as well as predict which medicines will work best for an individual. Such tests would be a huge benefit in treating psychiatric diseases said Murali Doraiswamy, also of Duke, who collaborates with Kaddurah-Daouk. In these conditions, he noted, physicians currently use trial and error to find the best option among dozens of possible drugs, and this period can take months and be difficult for the patient. 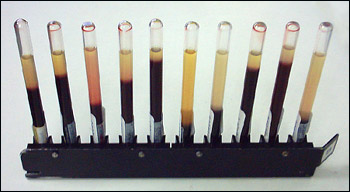 Metabolomic studies of neurological disease (reviewed in Kaddurah-Daouk and Krishnan, 2009) are already yielding potential biomarkers (see Part 3 and Part 4). Mikhail Bogdanov, of the Weill Cornell Medical College in New York City, told ARF he intends to soon publish data on metabolites that are common to Alzheimer’s, Parkinson’s, Huntington’s and ALS, as well as other metabolites that distinguish the four conditions. The researchers are still confirming that metabolites are linked to disease processes, not age or diet, but Bogdanov is confident they will be validated as disease markers. He declined to give ARF any hints, but said the markers would be new in the field of neurodegeneration. Moreover, scientists are finding metabolite patterns associated with neurodegeneration in blood plasma, which could save patients the trouble of a spinal tap.

In metabolomics, “could” and “might” remain the operative words. “We do not have biomarkers yet,” just “patterns,” Bogdanov said. “It is time to get to real structures.” Then, scientists will circle back to the genome, transcriptome, and proteome to get the big picture—in the über-ome that is systems biology.—Amber Dance.