Imagine a remote control that manipulates specific neurons in a mouse's brain while it scurries about its cage getting on with normal rodent business. Scientists led by Michael Bruchas, Washington University School of Medicine, St. Louis, Missouri, and John Rogers, University of Illinois at Urbana-Champaign have developed such a thing. As reported in the April 12 Science, they have built an ultrathin, flexible, light-emitting diode (LED) system that turns on and off optogenetically modified neurons with pulses of light. Their needle-thin LEDs can be inserted into deep regions of the mouse brain to precisely illuminate specific groups of cells. “It’s a powerful and convenient technology,” said Li-Huei Tsai, Massachusetts Institute of Technology, Boston, who was not involved in the research. “These refinements make light delivery less invasive, less damaging to tissues, and easier to manipulate than current methods.” Bruchas and colleagues used the technology to train mice to visit a specific arm of a Y maze.

The field of optogenetics has exploded in recent years. It promises to help decipher the circuitry of the brain. Scientists clone genes for light-sensitive channels into specific groups of neurons and then polarize or depolarize those cells with the flick of a switch and millisecond precision. The light-delivery equipment used to stimulate neurons has limited this field, however. Thick, rigid fiber optic cables can route light into the brain, but they cause tissue damage and inflammation along the way and tether the animals to restrict their movement.

Co-first author Tae-il Kim, Rogers, and colleagues developed a novel system that takes aim at these issues. Their multi-component, ultrathin, needle-like instrument is far thinner and more flexible than fiber optic wires. It incorporates a series of microscale, inorganic LEDs (μ-ILEDs) that are less than a thousandth the size of conventional LEDs and about as big (or small) as four neurons. They are placed at different locations along the shaft of the device and can be turned on or off separately, delivering light directly to precise areas of the brain (see image below). The μ-ILEDs come in various colors to activate channels stimulated by distinct wavelengths of light. They glow in all directions whereas light from fiber optic cables can only shine in one direction. 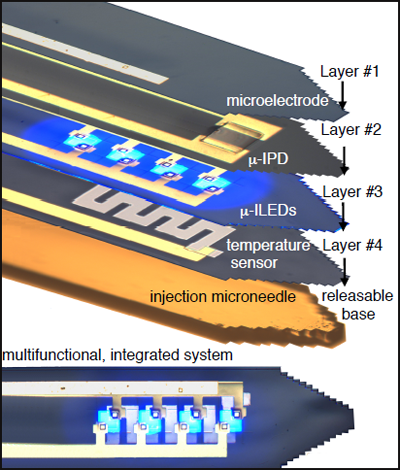 Four devices layer together on an ultrathin needle to form an integrated system. Image courtesy of Science/AAAS

It’s not just about light delivery, either. Sandwiched with the μ-ILEDs are tiny sensors to detect emitted light, electrical output from neurons, and temperature. This allows researchers to measure these factors close to the light source. All are built on flexible plastic to bend to soft tissue. They have to be inserted into the brain with a removable microinjection needle coated with dissolvable glue. A minute filament wire then protrudes from the mouse’s brain, and connects to a lightweight, hat-like wireless interface (see image below). 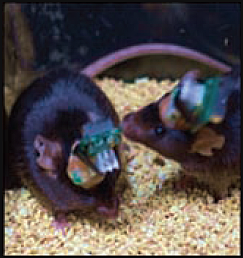 Mice can move freely with the wireless system on their heads. Image courtesy of Science/AAAS

“With this wireless technology, animals can engage in more complex environments,” said Bruchas. “The added microelectrodes, photodetectors, and temperature sensors also tell us a bit more about how the function of the brain is affected.” The system caused less gliosis than fiber optic cables. It operated several meters from the control source, accommodated many animals at once, and lasted for at least six months at a time. “That’s helpful for doing long-term studies on developmental or learning processes,” said Bruchas.

To demonstrate that the technology successfully stimulates mouse neurons, Bruchas, Jordan McCall, also a co-first author, and colleagues did some proof-of-concept experiments. They expressed light-sensitive channels in dopaminergic neurons of the ventral tegmental area (VTA-DA), which respond to rewards. By using the μ-ILEDs to selectively activate those cells when the mice poked the end of a Y-maze arm, the researchers successfully trained the animals to prefer that arm without offering them a food treat. The researchers also manipulated anxiety behavior by activating VTA-DA neurons at different frequencies. McCall and colleagues confirmed that the light from μ-ILEDs reached more neurons than fiber optics by measuring c-fos, a marker of neuronal activation. 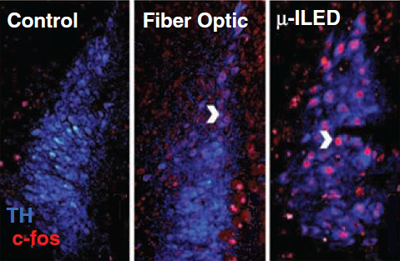 Light from μ-ILED devices can reach underneath and to the side of brain structures, activating more neurons than fiber optics can (shown by c-fos expression in red). Image courtesy of Science/AAAS

While Bruchas’s lab studies neural signaling behind social stress, other groups have their eye on the technology for neurological disease. Tsai has used optogenetics to examine the role of cholinergic stimulation on hippocampal oscillations in an Alzheimer’s disease mouse model (see ARF related news story). Some scientists want use this technology to study the link between neuron firing and Aβ release, said Jin-Moo Lee, also at WashU but not involved in this research. Researchers want to stimulate specific groups of neurons and observe the direct effect on Aβ peptide production, he said. Others may use it to see whether exciting certain cells raises transcellular spread of misfolded protein aggregates, such as tau (see ARF related news story), he speculated. Aside from studies on neurodegeneration, the wireless capability will make this technology ideal for myriad behavioral studies. Before it can be widely applied, however, the scientists will need to find ways to make it cheaper and reusable, said Lee.

Bruchas and Rogers say they aim to make their technology commercially available while at the same time giving people enough information to build it themselves. Once people are trained in how to implant and operate the equipment, it could be quite widely applied, said Bruchas.—Gwyneth Dickey Zakaib