Ever cramped up running for the bus? Muscle cramps are most often caused by a build-up of lactic acid, the product of anaerobic glucose metabolism. While lactate may be bad for the brawn, it may be great for the brain. In today’s Science, researchers at Cornell University provide compelling evidence that neurons preferentially use lactate as a source of energy, not glucose. The evidence may have profound implications for brain imaging studies.

The brain accounts for about 20 percent of our total energy consumption, a remarkable amount considering it doesn’t lift, pump, or warm anything. For decades it has been assumed that it is glucose that feeds this voracious appetite, and scientists often use glucose metabolism as a marker of neuronal activity. One of the most sophisticated measurements of brain function, for example, relies on positron emission tomography (PET) of isotopically labeled glucose (see ARF related news story on the use of PET to diagnose Alzheimer’s disease).

In the mid 90’s, however, Luc Pellerin and Pierre Magistretti at the University of Lausanne, Switzerland, reported that astrocytes, the house keepers of the central nervous system, respond to neural activity by increasing their anaerobic metabolism of glucose to lactate (see Pellerin and Magistretti 1997). This discovery, together with the knowledge that neurons preferentially oxidize lactate over glucose, led to the astrocyte-neuron lactate shuttle hypothesis. The theory contends that astrocytes, sensing a burgeoning neuronal energy demand, sate neurons by providing them with lactate. The neurons can then shunt this smaller carbohydrate directly to the mitochondria, where it can feed electrons, via lactate dehydrogenase, down the respiratory chain and release much-needed energy (in the form of ATP) in the process.

The problem with this hypothesis was proving it. How do you achieve the spatial and temporal resolution to identify which cells are the producers and consumers of lactate? Enter two-photon microscopy. Watt Webb is one of the pioneers of this technique, which can produce intense fluorescence without damaging soft tissue and which can be guided with laser-like precisions. Webb has now trained the microscope onto hippocampal slices. 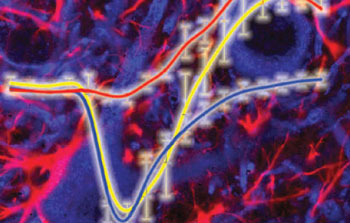 Measuring NADH fluorescence following electrical stimulation of hippocampal slices reveals which cells are doing what and when. Low resolution two-photon microscopy shows that NADH is consumed then re-formed (yellow plot). High resolution microscopy reveals that this biphasic response results from an initial consumption of NADH by neurons (blue cells, and blue plot), followed by production of NADH by astrocytes (red cells and red plot). The findings support the hypothesis that an astrocyte-neuron lactate shuttle supplies neurons with the fuel they need to fire. (Photo credit: Science)

Together with first author Karl Kasischke and other colleagues at Cornell, Webb used the natural fluorescence of NADH as a marker for lactate metabolism. NADH and lactate are inextricably linked. Oxidation of the nicotonamide co-factor is essential for formation of lactate from pyruvate, while oxidation of lactate leads to formation of NADH from its oxidized form NAD+. If the shuttle theory is correct, formation and consumption of lactate in astrocytes and neurons, respectively, should be revealed by changes in fluorescence, because unlike NADH, NAD+ is not fluorescent.

First Kasischke determined that under their experimental conditions the natural fluorescence of the neuropil is overwhelmingly due to NADH. Secure in this knowledge, the authors then measured how this fluorescence changes when hippocampal slices are electrically stimulated. Activation of hippocampal neurons led to a rapid dip in NADH fluorescence, followed about 20 seconds later by an overshoot in the same fluorescence (see yellow trace on accompanying image). But by focusing in on the fluorescence changes, Kasischke was able to show that the dip and the overshoot are not originating from the same cells. By measuring fluorescence from neurons, the authors were able to show that these cells are solely responsible for the dip (see blue trace on figure), while the astrocytes were responsible for the overshoot (see red trace).

The authors interpret the data as follows. The early dip is due to oxidation of NADH as the neurons respond to stimulation. The later overshoot is due to net formation of NADH as the astrocytes respond by increasing glycolysis, presumably to replenish lactate that has been exported, though the authors don’t explicitly discuss this. Their arguments are bolstered somewhat by the following facts. In the neurons the dip co-localizes with sites of oxidative phosphorylation, i.e. dendritic mitochondria, while in the astrocytes the overshoot co-localizes with the glycolytic compartment, i.e., the cytoplasm.

These results have immediate consequences for those studying brain function using a variety of imaging techniques. “The discovery that early oxidative metabolism is entirely neuronal strengthens the motivation for the current search for the initial dip in BOLD-fMRI, and the confinement of glycolysis to astrocytes implies that 18F-flurodeoxyglucose-PET studies measure glucose uptake into the glial and not the neuronal compartment during focal neural activity,” write the authors (see ARF related news story on the challenges and promises of BOLD-fMRI).

Pellerin and Magistretti are in agreement. “Images generated by FDG-PET primarily reflect astrocytic activity rather than neuronal activity,” they write in an accompanying perspective. Likewise, “magnetic resonance spectroscopy, which monitors changes in glucose and lactate levels with low temporal resolution, is more likely to reveal the late component of the metabolic response associated with astrocytes,” they conclude.—Tom Fagan