Cdk5’s repertoire is growing. In separate papers in this week’s PNAS online, researchers led by James Bibb and Amelia Eisch, both at the University of Texas Southwestern Medical Center, Dallas, report that the kinase is involved in dopaminergic transmission in the striatum and in the maturation of new neurons in the adult hippocampus, respectively. A third paper, in Tuesday’s PLoS Biology online, also reveals a role for Cdk5 in neurogenesis but in a slightly different way. Researchers led by Sebastian Jessberger and Fred Gage at The Salk Institute, La Jolla, California, found that Cdk5 is not required for maturation but for accurate integration of new neurons into existing cell networks. Together, the findings point toward both cell-autonomous and non-cell autonomous effects of Cdk5 in adult neurogenesis. Both may be important considerations in developing therapies based on stem or transplanted cells. “Those [studies] will be faster and more promising the more you understand the basic biology,” said Jessberger, in an interview with ARF.

Interest in Cdk5 (cyclin-dependent kinase 5) grew among Alzheimer disease researchers when Li-Huei Tsai, Massachusetts Institute of Technology, and colleagues showed that aberrant activation of the kinase by p25, a fragment of the Cdk5 coactivator p35, can bring about a neurodegenerative phenotype that bears an uncanny resemblance to AD—plaques, tangles, and memory problems included (see ARF related news story). This and other work led to the theory that activation of the p35 protease calpain, perhaps as a result of glutamate excitotoxicity, might contribute to neurodegeneration in the hippocampus and the cortex. “We wanted to know what would be the chronic effects in the striatum, a little deeper in the brain,” said Bibb in an interview with ARF. To test this, first author Douglas Meyer and colleagues took two approaches. They activated glutamate NMDA receptors in striatal slices, and they crossed mice overexpressing a tetracycline-driven p25 construct with mice that express a tetracycline transactivator in the dorsolateral striatum. The crosses only express the Cdk5 coactivator in the striatum.

Meyer and colleagues found that NMDA activation in striatal slices induced p25 production, and that turning on p25 in the striatum in vivo changed behavior. Though the mice’s baseline motor activity was normal, they showed an aberrant response in motor learning paradigms. Unlike normal mice, which learn to balance on the rotarod, for example, and respond to repeated daily cocaine exposure with progressively increased locomotor activity, the p25 crosses were weaker in both. “They couldn’t motor learn and they didn’t undergo a neuro-adaptive process to repeated exposure to cocaine, which targets that area of the brain,” said Bibb. “All that denotes loss of function.”

Intriguingly, while the animals overexpressing p25 in the striatum had these deficits, the researchers found no loss of neurons in that region of the brain. Instead, they found that p25-overexpressing cells shed about half of their dendritic spines and that the tissue showed signs of neuroinflammation, which is also apparent in AD. “The important part about this is, when we look at a neurodegenerative disorder like Alzheimer’s, we mostly think about loss of neurons resulting in reduced brain size, but clearly AD can have dramatic effects in this lower region of the brain, which is responsible for things like executive function,” said Bibb. In fact, recent reports suggest that in people with early onset familial AD, amyloid plaques first appear in the striatum (see ARF related news story). Whether p25 and Cdk5 have any role in that is unclear.

How p25 overexpression affects striatal dendritic spines is not yet clear either. One prime consideration is aberrant phosphorylation of Cdk5 substrates, such as cAMP-regulated phospho-protein of 32 KDa (DARPP-32), which has been linked to dopaminergic transmission. Cdk5 is normally activated by the short-lived p35, but when the more stable p25 enters the picture, it can upset the status quo and broaden the kinase’s range of substrates. “If Cdk5 is important in regulating dopamine neurotransmission, as we demonstrated, then any dysregulation that would direct it away from physiological substrates, such as DARPP-32, might be important for the function of these neurons,” said Bibb.

In addition to its roles in the adult brain, Cdk5 is also involved in developmental neurogenesis, where it plays a critical role in regulating neuronal migration. Jessberger and colleagues report that it may have substantially the same role in the adult brain. There, neurogenesis occurs in two select regions, one being the dentate gyrus of the hippocampus. In the November 11 PLoS Biology, Jessberger, now at the Institute of Cell Biology, ETH Zurich, Switzerland, and colleagues report that silencing Cdk5 in new hippocampal neurons knocks them off track. Without Cdk5, they fail to migrate properly. “What seems to underlie the whole phenotype is that the cells fail to get into their correct position,” said Jessberger. Even though they get stuck in the wrong spot (newborn neurons normally migrate to the molecular layer of the dentate gyrus), they still make synapses. “This was extremely unexpected, because granule cells always have an apical dendrite that goes into the molecular layer where the input comes in from the entorhinal cortex, and that is true for all granule cells,” said Jessberger. Instead, cells that wrongly migrated toward the hilus—the part of the hippocampus that sits under the dentate gyrus—also began making synapses. “This means that even though there would never normally be a synapse between a granule cell and hilar structures, the environment still supports synapse formation. This is a sign of how incredibly plastic the whole area is,” said Jessberger (see image below).

In support of this, researchers found that spines on wayward dendrites lined up in apposition to presynaptic proteins on hilar cells, suggesting they formed true synapses. Electron microscopy confirmed the existence of such synapses. 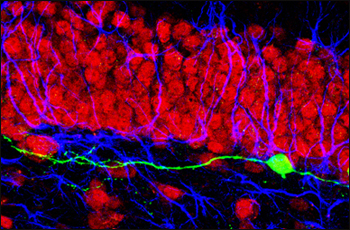 “I think this work is quite black and white and the orientation of dendrites is absolutely breathtaking” said Tsai in an interview with ARF. She noted that it may explain an observation she made back in 1997, when her lab made p35 knockout mice that turned out to be susceptible to seizures (see Chae et al., 1997). “It was never clear to me why, but now looking at adult neurogenesis and these dentate gyrus neurons, they clearly cannot make normal connections, so I think this is very likely the mechanism underlying the seizure behavior,” she said.

Jessberger’s approach, injecting retrovirus carrying an expression construct for a dominant-negative form of Cdk5, silenced the kinase in about half of new neurons but had no effect on their proliferation or differentiation. In contrast, UT Southwestern’s Eisch concluded from her data that Cdk5 is necessary for newborn neurons to reach maturity. First author Diane Lagace and colleagues used a different approach, i.e., an inducible Cre-lox system, to ablate Cdk5 from all nestin-positive neuronal progenitors. In these scientists’ hands, removing Cdk5 did not affect the number of proliferating cells; however, the number of new mature neurons (as judged by expression of the neuronal marker NeuN) was down about fivefold.

Why did the two groups come to very different conclusions? That’s not clear, but Jessberger offered some suggestions. “I think the most straightforward explanation is that because our knockdown of Cdk5 was less than 100 percent, cells survived and we could show the role of Cdk5 in neuronal migration. Eisch’s level of knockout was more complete and masked this role,” he said. More broadly, Jessberger suggested that taken together, the two sets of experiments argue for the existence of both cell-autonomous and non-cell-autonomous effects. The knockout approach would favor the latter, he suggested, because it affects all cells similarly. “I think her approach is somewhat cleaner, but because in a small area every newborn cell does not have Cdk5, you could end up with non-cell-autonomous effects because all your neighbors do not have the kinase,” said Jessberger. By contrast, his approach deletes the kinase in only a small subset of cells, eliminating environmental effects from neighboring cells. In fact, Eisch and colleagues found that deletion of Cdk5 in mature dentate gyrus neurons also prevented neurogenesis, which suggests that even when progenitors express Cdk5 normally, there are environmental effects that prevent their maturation. That would tie in with the notion of the non-cell-autonomous effect.—Tom Fagan