Since amyloid-β plaques are extracellular and neurons churn out the plaques’ constituent peptides, researchers have, by and large, assumed that Aβ starts aggregating outside the cell. However, two recent studies bolster the idea that events kicking off plaque formation may, in fact, occur within cells. Applying state-of-the-art biophysics to tackle the cell biology of Aβ aggregation, German scientists have developed a cell culture system for modeling Aβ plaque formation. Reported online in this week’s PNAS Early Edition, their data suggest that cells internalize Aβ peptides and shunt them to intracellular vesicles, where Aβ gathers into fibrils that can rupture vesicular membranes. In this model, these events eventually choke the life out of cells, causing them to spew their clumps of intracellular amyloid into the extracellular space. “Our mechanism reconciles the extracellular starting point (i.e., Aβ peptides) and endpoint (i.e., extracellular plaques) with an intermediate step that occurs inside the cell,” lead investigator Marcus Fändrich of Max-Planck Research Unit for Enzymology of Protein Folding in Halle, Germany, told ARF.

A similar story emerged from a study published in the December 1, 2009, PNAS. In that paper, Jin-Moo Lee and colleagues at Washington University School of Medicine, St. Louis, Missouri, show that cells can take up Aβ peptides at low extracellular concentrations and concentrate them in late endosomes/lysosomes, where they form aggregates capable of seeding growth of amyloid fibrils. By highlighting the potential importance of intracellular events in the initial steps of plaque formation, the two studies may help guide the development of AD drugs that target Aβ aggregation.

To gain some insight into these issues, Fändrich’s team set out to devise a method that would enable careful scrutiny of plaque formation in a culture dish. The current study builds upon a system his lab had previously developed using primary human macrophages to make Aβ plaques (Gellermann et al., 2006). “We have substantially improved it and made it more reliable,” Fändrich said.

First author Ralf Friedrich and colleagues sprinkled Aβ(1-40) peptide into the culture medium of a handful of different cell types, and found that the two monocytic lines—one mouse (J-774A.1), one human (THP-1)—produced the greatest plaque load. Human neuroblastoma cells (SHSY5Y), and mouse and human primary phagocytes could also do the job, though not nearly as robustly. The researchers used THP-1 cells for most of the remaining experiments. They confirmed they were seeing bona fide Aβ plaques using a host of biochemical, biophysical, and immunostaining techniques.

When they threw in paraformaldehyde or fixed with methanol to kill the cells, plaques did not form, suggesting that living cells are required for the process. This came as a surprise. “You can take pure Aβ peptide and put it in a test tube, and it will form amyloid fibers. So you would not expect that cells need to be present to form plaques,” Fändrich said. “Yet we reproducibly found that when it comes to formation of fibrils and plaques, cells are indeed involved.” Time-lapse video microscopy using fluorescent Aβ(1-40) confirmed this, showing plaques always forming right next to cells or within cell bodies.

Addition of endocytosis and phagocytosis inhibitors (cytochalasin B or latrunculin B) also reduced plaque yield, suggesting that Aβ peptides may need to be internalized before they form plaques. However, Aβ taken up by THP-1 cells did not co-localize with early endosomal or lysosomal markers, as revealed by freeze-fracturing the cells and peering at their insides with Aβ immunogold labeling and transmission electron microscopy. Instead, the researchers saw Aβ forming fibrillar bundles within MVBs; these are multifunctional compartments that interface with other vesicular pathways, including the lysosome/endosomal system. Even more stunning, some of the Aβ fibrils looked as though they had punctured the MVB membrane (see image). “Initially we thought this could be an artifact,” Fändrich said. “But we observed it with many cells. It’s something we saw reproducibly.” 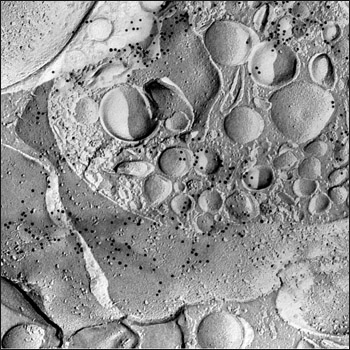 One caveat is that the model may not directly capture what happens in the brain and in neurons. “But it’s a step forward,” said Gunnar Gouras of Weill Cornell Medical College in New York. “We can study β amyloid in a test tube, and we can do pathology in the brain, and it's not easy to combine those two, but that's what they're doing.” (See full comment below.)

Fändrich said their working hypothesis is that internalization of Aβ peptides into intracellular vesicles promotes their aggregation not only by increasing local Aβ concentration but also by presenting factors (e.g., gangliosides) known to encourage fibrillation.

The Washington University scientists arrived at a similar mechanism “but with different models that may be telling different parts of the same story,” Lee told ARF. His team designed a study to address a longstanding conundrum about Aβ—namely, that Aβ42, the major form in AD plaques, assembles into fibrils in vitro at high (micromolar) concentrations and in acidic conditions not found in the brain’s extracellular fluid. Such circumstances do exist within late endosomes/lysosomes.

To visualize Aβ internalization, first author Xiaoyan Hu and colleagues incubated fluorescent Aβ42 with SHSY5Y human neuroblastoma cells. Confocal microscopy revealed cells taking up Aβ within 24 hours at physiologically relevant concentrations of extracellular Aβ as low as 1 nM. Furthermore, the researchers found Aβ-containing vesicles co-staining with lysosomal markers, suggesting that Aβ gets trafficked into the lysosomal pathway. It appears to get cleared out quickly, though, as only a few fluorescent vesicles remained 24 to 48 hours after washout with Aβ-free medium.

Performing pixel-by-pixel analysis of fluorescence intensity to analyze 29 vesicles from five different images, the researchers estimated that vesicular Aβ was concentrated about 100-fold relative to its extracellular starting conditions. Furthermore, the intracellular Aβ formed aggregates that were able to seed formation of amyloid fibrils when mixed for 48 hours with fluorescent Aβ(1-42) at concentrations normally too low for spontaneous fibril formation.

A key difference between the two studies concerns which vesicular compartment Aβ peptides went to once the cell had taken them in from the outside. “I think these are differences in terms of how the Aβ is taken up and how it’s trafficked,” Lee said, noting these could have stemmed from the different cell types (monocyte vs. neuronal) analyzed by each group. “In my case, we’re seeing receptor-mediated endocytosis, which goes to a lysosome. I think [Fändrich] may be seeing more phagocytosis, which is not receptor-mediated.” Fändrich’s observations seemed reminiscent of several recent papers demonstrating phagocytosis of tau and polyglutamine fibrils (Frost et al., 2009; Ren et al., 2009), Lee said.—Esther Landhuis