“If Aβ neurotoxicity is indeed caused by specific receptor-ligand interactions, then the neuroimmune receptor PirB is clearly a candidate for mediating at least some of the disease symptoms,” Iryna Benilova and Bart De Strooper, University of Leuven, Belgium, wrote in a commentary on the new study in the same issue of Science.

PirB (see image below) came to Shatz’ attention through her longstanding interest in neural development. More than a decade ago, she and colleagues discovered that mice lacking class I major histocompatibility (MHC) proteins—the ligands for T-cell receptors—develop abnormally due to exaggerated plasticity and faulty synapse removal (Huh et al., 2000). The scientists identified PirB as an MHC class I receptor, and showed that PirB-deficient mice had a similar phenotype (Syken et al., 2006). The Shatz lab studies synaptic plasticity in the visual system by measuring ocular dominance plasticity (ODP), the process by which brain circuits reallocate connections to an open eye if the other is closed or damaged during development. Loss of PirB leads to exaggerated ODP in wild-type mice. 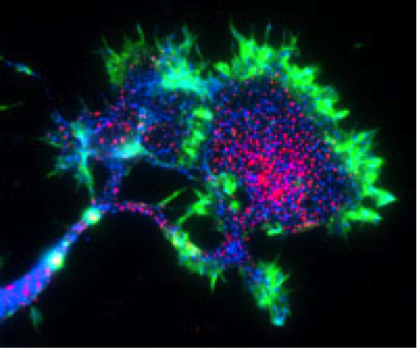 How might this relate to neurodegeneration? “If AD starts way before plaques and tangles appear, and is a disease of synapses,” Shatz told Alzforum, “then maybe we would see ODP defects in AD mice early on.” Lo and behold, two strains—the APP/PS1 and Tg2576 transgenics—showed none of the signs of ODP that wild-type mice do when tested at 4-5 weeks of age (ARF news story). That work—done by co-author Chris William in Brad Hyman’s lab at Massachusetts General Hospital in Boston—suggested to Shatz that synaptic plasticity falters well in advance of Aβ pathology and symptoms. Given that PirB knockout mice had too much plasticity while AD mice had too little, could removing PirB restore ODP to the visual cortex of AD mice? “One way this could work is if PirB actually binds beta-amyloid,” said Shatz, presuming that Aβ might hijack the PirB receptor away from its normal partners.

Importantly, the present study also showed that Aβ-PirB association disrupts neuronal function. When the researchers dumped Aβ onto hippocampal slices from mice with and without PirB, they found that PirB-deficient slices were immune to the loss of synaptic strengthening (long-term potentiation) Aβ normally inflicts on wild-type brain tissue. Moreover, nine-month-old mice growing up without PirB performed as well as wild-type mice on recognition memory tasks, Shatz said.

As a step toward testing the relevance of this finding in humans, Shatz’ team found that Aβ42 oligomers also bind the human homolog of PirB—leukocyte immunoglobulin-like receptor B (LilrB2). Western blotting detected LilrB2 protein on postmortem brain specimens from both healthy elderly and people with AD. However, downstream signaling looked different in brain extracts from APP/PS1 mice and AD patients, relative to their respective controls. When Aβ is around, PirB interacts more with protein phosphatases PP2A, PP2B (calcineurin), PP2C, and cofilin, an actin-depolymerizing factor involved in memory consolidation. AD brains have an abundance of cofilin (ARF news story), a protein thought to regulate dendritic spine morphology and cellular memory correlates (Rust et al., 2010). Previous work in the Hyman lab suggests that Aβ peptides cause neurons to shrivel and lose spines in part by activating calcineurin (ARF news story).

All told, the findings expand the list of putative Aβ receptors but also raise questions about the critical features of these associations. “Do the numerous ‘Aβ receptors’ simply reflect the sticky nature of Aβ oligomeric species, or is there a particular ‘pathological conformation’ in some of the putative oligomeric intermediates that promotes interaction with specific receptors?” Benilova and De Strooper ask in their editorial.

Moustapha Cissé of INSERM in Valbonne, France, notes that the use of synthetic (i.e. non-physiological) Aβ oligomers has been known to skew interactions with endogenous proteins and suggested confirming the results with Aβ oligomers derived from AD brain or CHO cells (see full comment below). In the end, “the key question is not so much whether sticky Aβ oligomers bind a particular receptor, but whether such Aβ receptor-mediated pathways are functionally meaningful and can ultimately be used to create novel therapies,” Benilova and De Strooper wrote. Toward that end, Shatz and colleagues have designed a PirB inhibitor and plan to test if it can boost synaptic plasticity in the brains of adult wild-type mice and AD models. To Shatz’ knowledge, LilrB2 gene variants have not cropped up in AD genomewide association studies. LilrB2 sits near apolipoprotein E (the top AD risk gene) on chromosome 19.—Esther Landhuis