Just as people pick up customs and culture from the neighborhoods where they grew up, neurons adopt distinct roles as they develop in certain brain regions. The same appears true for astrocytes, according to a Science paper published online today. Tracking fluorescently labeled astrocytes in transgenic mice, scientists determined these support cells hardly wander from their birthplace, even in response to injury. The findings support the idea that the glial cells develop in local neighborhoods to support particular groups of neurons, and suggest it could be hard to replenish astrocytes damaged by injury or disease. The work was led by co-senior authors David Rowitch and Arturo Alvarez-Buylla at the University of California, San Francisco, and William Richardson at University College London in the U.K.

“This is one of the most important papers ever written on astrocytes,” Ben Barres of Stanford University School of Medicine, Palo Alto, California, wrote in an e-mail to Alzforum. “Its implications are very important, and it shows that we don't begin to understand the roles of astrocytes in normal development and function, and why so much glial heterogeneity is needed.” (See full comment below.) On a similar vein, Barres and colleagues reported in the May 2 Journal of Neuroscience that astrocytes upregulate distinct sets of genes depending on the type of inducing injury (see Zamanian et al., 2012, and associated comments).

Astrocytes support neurons doing all sorts of jobs—some in cognition, others in language or motor control—but it was unclear to what extent the glial cells develop to support these specialized roles. Neuronal diversity arises in part because the brain has hundreds, if not thousands, of small domains from which distinct populations emerge. “We wanted to test whether astrocytes also develop in local neighborhoods, in which case there might be a special relationship between astrocytes and the neurons developing around them,” Rowitch told Alzforum.

First author Hui-Hsin Tsai and colleagues used spatially restricted Cre transgenes to stain specific brain and spinal cord domains of mouse embryos with reporter proteins, then looked in the adult brain for labeled astrocytes emerging from these progenitor domains. For higher resolution, Alvarez-Buylla used Cre-expressing adenoviruses to track smaller populations in the brain. “We found a very precise relationship between where astrocytes end up and where they develop,” Rowitch said. “Their movement is extremely restricted to the place of their birth.” (See image below.) The findings confirm prior work suggesting that astrocytes move in distinct zones during development (Noctor et al., 2004; Schmechel and Rakic, 1979; Voigt, 1989), yet run counter to other reports raising the possibility that the glial cells can travel far and wide (Levison and Goldman, 1993; Windrem et al., 2008). 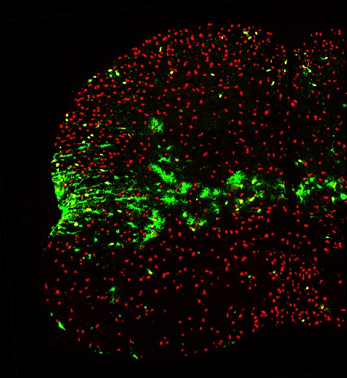 Even if they stay put during development, would astrocytes move to replenish brain areas ravaged by disease or injury? The researchers did two experiments to find out. First, they pierced the spinal cord to create a stab wound, and looked to see if fate-mapped astrocytes came to the rescue from neighboring areas. “They never budged,” Rowitch said. “The only gliotic response was from the local astrocytes.” Second, they depleted astrocytes in specific regions using a suicide gene approach. Again, astrocytes did not migrate in from adjacent domains. Furthermore, the ones left unharmed did not expand to repair and repopulate the area.

“Our data raise concern that the ability for regeneration and repair of astrocyte populations could be extremely limited,” Rowitch said. This may be important for amyotrophic lateral sclerosis (ALS) and other disorders in which astrocytes are damaged. “If we get to the point where we’re transplanting astrocytes in ALS, we might need to transplant the right astrocytes. Our results suggest there may be a specialized astrocyte for motor neurons,” Rowitch said.

Terrence Town of the University of California, Los Angeles, wonders whether astrocytes are similarly restricted in Alzheimer’s disease. “We tend to think of astrocytes being more mobile, surveying the brain milieu and responding to plaques and tangles,” he told Alzforum. “Would AD mice have this same lack of astroglial movement as seen in the acute brain injury models [of the current study]?” asked Town, who called the work "incredibly impressive and thought provoking." Magdalena Götz of Ludwig Maximilians University, Munich, Germany, noted that the ablation experiments “occur very early and may be less relevant to age-related neurodegenerative diseases.” (See full comment below.)

All told, the current work is “a preliminary, fundamental biology study attempting to show how astrocytes may be a very heterogeneous group of cells,” Rowitch said. “This means we should be able to parse them out into different subpopulations during development and during disease conditions to see how some may differ from the resting, supportive population. That’s going to give us new handles on investigating the neuropathology of diseases like AD.”—Esther Landhuis