For decades, scientists have wondered how ApoE4, the strongest genetic risk factor for Alzheimer’s disease, influences pathology. They know the allele affects cells and tissues in many ways, but which actually lead to AD? Researchers led by Asa Abeliovich at Columbia University, New York, outline a new approach to answer the question in the July 24 Nature online. They compared transcriptomes of healthy ApoE4 carriers to those of LOAD patients who do not carry this gene, and found common patterns of gene expression. Genes regulating endocytosis and the processing of the amyloid β precursor protein (APP) stood out, hinting that ApoE4 primes the brain for APP-related changes that lead to AD, suggested the authors. “The data jibe with longstanding human and mouse data showing that ApoE4 enhances brain amyloid pathology,” wrote Samuel Gandy, Mount Sinai Medical Center, New York to Alzforum in an email. “It is heartening to think that after 20 years of ApoE4 linkage to AD, there are new exciting leads that might offer an explanation.” However, he noted some caveats (see full comment below).

Studies of humans, mice, and cultured cells suggest that ApoE4 impairs Aβ degradation and clearance, and encourages inflammation and endocytosis, which create even more Aβ (see Castellano et al., 2011; Koistinaho et al., 2004; Zhu et al., 2012; and He et al., 2007). However, it is unclear if all or any of these effects cause AD, result from it, or even relate to the disease, said co-first author Herve Rhinn. He and colleagues wanted to figure out what changes occur first as a way of getting closer to the root causes of the disease.

To do that, Rhinn and co-first author Ryousuke Fujita looked for transcript alterations in the cerebral cortex of postmortem brains from 185 healthy people grouped by ApoE status. The analysis revealed more than 8,000 genes that were expressed differently in people who carried the ApoE4 allele compared to those with ApoE2 or E3. Of those hits, 215 turned up in a separate analysis comparing expression in 86 LOAD patients and 67 age-matched controls, all without ApoE4. These genes may be key to AD risk endowed by ApoE, suggested the authors. 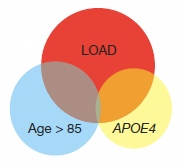 Curiously, the ApoE4 pattern barely overlapped with that seen when the researchers compared gene expression among 64 older (age 85 and up) and 56 younger brains (age 75 or less). This suggested to the authors that ApoE and aging—the major risk factor for late onset AD (LOAD)—contribute to the disease via separate mechanisms (see figure below). The implication is that “different genetic forms or subtypes of Alzheimer’s disease may have specific underlying mechanisms and respond differently to treatment,” wrote Vivek Swarup and Daniel Geschwind of the University of California, Los Angeles, in an accompanying editorial.

To find out what mediated the differences in expression, the researchers applied a systems biology approach called differential co-expression analysis (DCA), which weighs results based on co-regulated genes (see ARF related news story). This identified 20 "master regulators" of the 215 genes. Researchers had previously associated the top hit, the zinc-binding protein RNF219, with cognitive performance, lipid metabolism, and brain ventricular volume. Another candidate—the synaptic vesicle protein SV2A—helps regulate neuronal endocytosis. Scientists had previously tied several of the regulators, including APBA2, ITM2B, and FYN, to the processing and intracellular trafficking of APP. Fyn kinase has also been linked to Aβ toxicity via tau (see ARF related news story).

To test whether these 20 genes bring about ApoE4’s effects, Rhinn and colleagues used small hairpin RNAs to knock down several individually in mouse N2a neuroblastoma cells and gauge how the cells reacted to added human recombinant ApoE4. This treatment spurred production of Aβ40 and Aβ42 in wild-type N2a cells, but not when the genes were knocked down.

The researchers then took a closer look at RNF219 and SV2A. Knocking down either prevented ApoE4 from boosting β–secretase 1 (BACE1) processing of APP, which it does in wild-type cells by promoting co-localization of BACE1 and APP in endosomes. Levetiracetam, an SV2A inhibitor used to treat epileptic seizures, also reduced Aβ production in N2a cells as well as in neurons induced from human fibroblasts donated by ApoE4 carriers. Together, these results suggest that RNF219 and SV2A mediate ApoE4’s effects on APP processing, concluded the authors.

Previous studies suggested that levetiracetam lowers neuronal hyperactivity and improves cognition in J20 mice. Interestingly, other anti-epileptic drugs, which have no affinity for SV2A, failed to achieve the same result (see ARF related news story). “We think levetiracetam works by reducing Aβ,” Abeliovich told Alzforum. “Our work reframes existing data, and suggests that hitting this target [SV2A] could be disease-altering,” he said. Michela Gallagher, Johns Hopkins University, Baltimore, Maryland, who previously reported that levetiracetam improved memory in people with mild cognitive impairment (see ARF related news story), agreed. “This report has potential therapeutic implications in support of SV2A as a target to prevent LOAD, at least in ApoE4 carriers,” Gallagher wrote to Alzforum in an email (see full comment below). She pointed out that benefits of levetiracetam extend to mice and humans that do not carry ApoE4, so the drug could help a broader population.

Scott Small, also at Columbia University, pointed out that the data support a hypothesis, summarized in his review written with Gandy, that any defect that keeps APP and BACE1 in endosomes will increase Aβ production and drive pathology (see Small and Gandy, 2006).

Other experts cautioned that the paper was still speculative, and required more exploration. “It will be interesting to see if the function of SV2A and RNF219 described here in cell culture can be reproduced in AD animal models,” wrote Lars Ittner, University of New South Wales, Sydney, Australia, to Alzforum via email (see full comment below). Ittner pointed out that how these ApoE4-driven changes relate to tau remains to be seen. Gandy cautioned that in other cultured neural cells, ApoE4 does not modify APP sorting or processing (see Biere et al., 1995).

Abeliovich plans to test if and how the other hits from this DCA study influence disease progression. In addition, he will extend this analysis beyond ApoE4 to other risk variants identified in genome-wide association studies for AD, and apply the method to Parkinson’s disease (see ARF related news story).—Gwyneth Dickey Zakaib