If you want to alter a ship’s course, you don’t go to the deck swabs or the cabin boys. You go straight to the captain. In Parkinson disease, that “captain” may be a master transcription regulator on which mitochondrial function depends, according to a paper in the October 6 Science Translational Medicine. A multinational consortium of researchers report that peroxisome proliferator-activated receptor γ coactivator-1α (PGC-1α to its friends) manages multiple genes that mitochondria need for biogenesis, electron transport, and glucose metabolism (Lin et al., 2005). The authors suggest that activating PGC-1α could slow the course of Parkinson’s.

“It is all pointing to the mitochondria,” said senior author Clemens Scherzer, who works at Harvard Medical School along with first author Bin Zheng. The project, a meta-analysis encompassing 17 studies and samples from 410 people, is the first publication to result from the Global PD Gene Expression (GPEX) Consortium. Researchers banded together in 2003 to search for cellular processes that are affected in PD. Then, according Scherzer, they had to wait for enough studies to be conducted. Further, the researchers had to devise the proper statistical tools. “Nobody had done this gene set meta-analysis before,” Scherzer said. The approach is “appealing,” commented Vamsi Mootha of Harvard Medical School, who was not involved in the study, by e-mail.

The current analysis is different from a genomewide association study (GWAS), in which scientists search for individual genetic factors that influence disease. In this genomewide expression study (GWES), Scherzer and colleagues were looking for subtle changes in the mRNA profiles of people with PD. They reasoned that a single gene change might be too small to appear significant in their analysis. Instead, they looked for associations between PD and sets of genes with similar function. Thus, they compared PD status to mRNA profiles of 522 overlapping gene families. This kind of analysis makes several small changes in expression of related genes detectable. 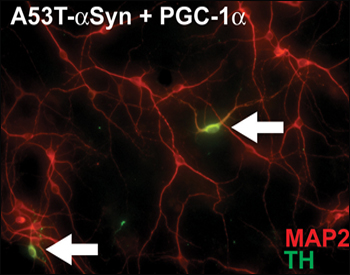 The study included three stages. In the first stage of their project, the GPEX scientists collected gene expression data from nine studies of human substantia nigra tissue, collected at autopsy. Some samples were whole substantia nigras and some were laser-captured dopaminergic neurons (see related ARF Webinar). By comparing 99 PD cases and 86 age- and gender-matched controls, the researchers found that 28 of the 522 gene sets were broadly under-expressed in people with Parkinson’s. Many of these gene sets encoded cellular bioenergetics pathways.

This stage one experiment told the scientists about the final phase of Parkinson disease, at time of death. But Scherzer is interested in the changes that happen early on, even before symptoms start, in order to find treatments that might slow or halt neurodegeneration. Therefore, the consortium scientists collected tissue from 16 cases of subclinical PD for their stage two analysis. These samples came from people who had no recorded symptoms of Parkinson disease, but who, upon autopsy, evinced Lewy body pathology. As such, they likely were on the road to Parkinson’s, Scherzer said. The researchers analyzed their 28 gene sets in these cases versus 17 controls, and concluded that 12 gene sets were affected in early PD.

The first two stages were based on substantia nigra tissue, but it is increasingly recognized that PD pathology affects other parts of the brain, as well as blood cells (Alafuzoff et al., 2008; Haas et al., 1995). So for stage three, in a further seven data sets, Scherzer and colleagues examined other tissues: the frontal and prefrontal cortices, basal ganglia structures, and blood. Based on 106 diagnosed PD cases and 86 controls, the researchers narrowed their 12 gene sets down to 10 that are under-expressed in PD.

The 10 gene sets were all related to electron transport and glucose utilization. The set most tightly associated with PD was a 95-gene family of nuclear-encoded electron transport chain genes. Another strongly linked set was a family that functions in pyruvate uptake. Krebs cycle participants were also affected.

This widespread deterioration of mitochondrial pathways, Scherzer said, suggests a “pervasive” defect in the organelle’s function, affecting all neurons as well as blood cells. He speculated that dopaminergic neurons, with their hunger for energy and their production of stressful free radicals, might be particularly susceptible to mitochondrial dysfunction.

Scherzer’s acute interest was drawn by a set of 425 genes united by their dependence on the master transcription regulator PGC-1α. These genes encode proteins for electron transport as well as translation, folding, and import of mitochondrial proteins. It is not yet known if expression of PGC-1α itself is altered in PD tissues, or if the action of the protein is otherwise compromised.

To further examine the role of PGC-1α, Scherzer and colleagues teamed up with Jean-Christophe Rochet, of Purdue University in West Lafayette, Indiana, for cell culture experiments. The researchers worked with two cellular PD models: One system was primary rat neural cultures transfected with α-synuclein carrying a PD-linked mutation. The other was human catecholaminergic SH-SY5Y cells treated with rotenone, a pesticide linked to PD. In both kinds of cultures, overexpression of human PGC-1α activated the electron transport chain, allowed cells to retain neural processes, and kept more cells alive. The results fit with work in mice showing that PGC-1α knockout mice are more susceptible to MPTP treatment, which causes PD-like symptoms, than are wild-type animals (see ARF related news story on St-Pierre et al., 2006). Mootha suggested that crosses between PGC-1α-overexpressing mice and genetic neurodegeneration models would further strengthen the scientists’ conclusions.

All that evidence has scientists eyeing the mitochondrion as a place to send their drugs. “At present,” Mootha wrote, “it is not clear what the best approach might be—perhaps targeting [PGC-1α], perhaps something upstream, or perhaps tuning a specific bioenergetic parameter of the mitochondrion.”

Of those options, PGC-1α is an appealing target because drugs are already available. PGC-1α is involved in metabolic syndromes, including diabetes, and the FDA has approved some activators. Scherzer is currently testing these compounds in cultured neurons to find those that best activate PGC-1α.

Scherzer hopes turning up PGC-1α and its associated host of mitochondrial-boosting genes could slow Parkinson’s. However, he noted, by the time people show symptoms, they have generally lost 70 percent of their dopaminergic neurons in the affected brain areas. People tend to have PD pathology in the brain five or more years before they have trouble moving (Savica et al., 2010). So the success of a PGC-1α therapy would depend on the current hunt for biomarkers that identify Parkinson’s early (see Scherzer, 2009).

The PGEX Consortium has other projects in the works, Scherzer said, “This is hopefully our first installment of many.” The group is working on a similar GWES meta-analysis in animal models of PD. In addition, they are developing a publicly accessible database similar to PDGene. Scherzer hopes the project will allow anyone to log on and “get sort of a hit parade of transcripts and genes in Parkinson disease.”—Amber Dance