In this week’s Nature, researchers report the first successful crystal structure of a bacterial presenilin homologue. The human presenilin forms the active part of the transmembrane γ-secretase complex that releases Aβ from its precursor, but it has resisted previous attempts at crystallization and detailed structural study. The authors, led by Yigong Shi at Tsinghua University, Beijing, China, got around that problem by instead using a closely related archaebacterial presenilin/SPP homologue (PSH). Their structural findings largely agree with previous electron microscopy studies of γ-secretase (see ARF related news story and ARF news story). They include more detail and also contain a few surprises, noted Michael Wolfe at Brigham and Women’s Hospital, Boston, Massachusetts, in an accompanying Nature commentary. The biggest surprise is that a small pore pierces through the entire transmembrane region of the protein, raising the question of whether ions or water could pass through the complex.

Christian Haass at Ludwig-Maximilians University, Munich, Germany, wrote to Alzforum that the work represents a “…fantastic breakthrough. I am extremely pleased that many of the seminal findings on structure/function relationships made by numerous researchers in the field were fully confirmed.” (See full comment below.)

The crystal structure confirms that presenilin has nine transmembrane domains (TMDs). Two aspartate residues critical for enzymatic cleavage lie in TMD6 and 7, inside the cell membrane but facing a cytoplasmic pocket that would give them access to water. This is crucial because presenilin needs water to hydrolyze its substrates. Also consistent with previous work (see Kornilova et al., 2005; Sato et al., 2008), the data suggest that substrates slide into presenilin through an open space between TMD6 and TMD9, which exposes them to the active site and its watery cavity. The unexpected finding was the presence of a membrane-spanning hole nestled between TMD2, 3, 5, and 7 (see image below). This pore could provide an additional way for water to reach the active site, or for ions to pass through the protein, Wolfe suggested in his commentary. Some researchers have proposed that presenilin acts as a calcium channel (see ARF related news story). Alternatively, the hole might be plugged by lipids or other small molecules in vivo, the authors note. 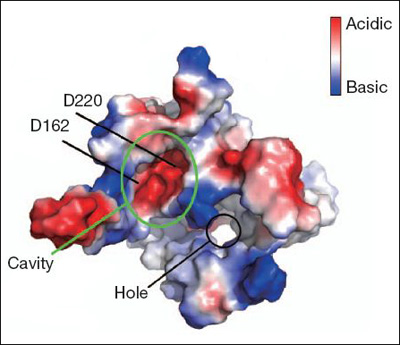 Model of PSH shows watery cavity at the active site and a transmembrane pore. Image courtesy of Yigong Shi and Nature

“[The authors’] work opens up a whole new horizon that should ultimately lead to a detailed understanding of human presenilins and of the entire γ-secretase complex. Such understanding should lead to specific ideas about how disease-causing mutations alter function, and how small molecules might be designed for safe and effective treatment of Alzheimer’s disease,” Wolfe wrote.––Madolyn Bowman Rogers