The Food and Drug Administration (FDA) has approved Amyvid (florbetapir F18 injection), Avid Pharmaceuticals/Eli Lilly and Company's positron emission tomography (PET) tracer, for Aβ plaque imaging in cognitively impaired patients being clinically evaluated for Alzheimer’s disease. The compound will be available for use in June, with the aim of helping researchers rule out—not diagnose—the disease.

"Amyvid is the first and only FDA-approved radioactive diagnostic agent for brain imaging of amyloid plaques in patients," said Daniel Skovronsky of Avid in a telephone press briefing today. Approval "offers physicians a tool that, in conjunction with other diagnostic evaluation, can provide information to help physicians evaluate their patients."

Amyvid's main purpose will be to rule out AD; a negative scan means little or no plaque is present, which effectively rules out AD as the cause of the person’s cognitive decline. This could help the approximately one in five patients who are diagnosed with Alzheimer's but later at autopsy show no evidence of the disease. "A physician can further evaluate [a patient] to try and figure out what they really have," Skovronsky told Alzforum. However, since plaques can be present in both people with or without AD, a positive scan—indicative of moderate to frequent plaques—would not establish an Alzheimer's diagnosis. Further, Amyvid is not approved to monitor plaque response to therapies or predict risk for dementia, Skovronsky said.

An FDA advisory panel temporarily rejected Avid Pharmaceutical's new drug application in January of 2011, pending better inter-reader reliability of the scans (see ARF related news story). In answer to the specific requests the FDA issued in March 2011, the company has since developed a binary method of reading the scans, as well as a training program to teach radiologists and nuclear medicine physicians how to evaluate them. In place of the previous five-point, semi-quantitative method, black-and-white scans are now read as positive or negative, based on the radioactive contrast between cerebral cortex gray matter and adjacent white matter (the cerebellum radioactivity does not come into play). For instance, a negative scan shows more radioactivity in white matter than gray, creating a distinct border between the two. Positive scans lack that clear definition in two or more brain areas, making normally distinct borders appear blurred, or gray matter radioactivity may even surpass that of nearby white matter (see picture below). Noisy scans, those of significantly atrophied brains, and scans of patients who move during the procedure may be more difficult to interpret. (For more information, see Amyvid's full prescribing information.) 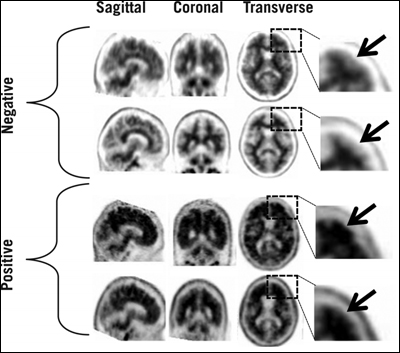 A three-hour training program for radiologists and nuclear medicine physicians will be available both online (a link to the program will appear later on the Amyvid website) and in person to teach readers how to interpret the scans (see ARF related news story). In previous trials of the training program, in-person training resulted in 96 percent sensitivity and 100 percent specificity in reading scans taken within a year of a patient's death. For people trained remotely online, sensitivity averaged 82 percent and specificity 95 percent.

PET scans using Amyvid will not be covered by Medicare at the time of the June launch, said a Lilly representative. The company, with industry and trade associations as well as professional societies, is lobbying to change that. Partnering with the American College of Radiology and the Society of Nuclear Medicine, Lilly has requested formal reconsideration of the non-coverage policy by the Center for Medicare and Medicaid Services, a process that could take nine months or more, said the representative. Amyvid's cost may limit its initial use; each dose will cost roughly $1,600, though that will vary depending on private insurance coverage and where the scan is conducted.

"The approval of PET amyloid imaging for clinical use is definitely an important step
forward for the field," Reisa Sperling, Brigham and Women's Hospital, Boston, Massachusetts, told Alzforum in an e-mail (see full comment below). "PET amyloid imaging will prove useful in the clinic, especially for those difficult dementia cases—younger patients, unusual clinical presentations, or apparently rapidly progressing dementias," she added.

But clinicians have their work cut out for them in terms of developing careful guidelines and recommendations for how Amyvid and similar compounds are used, said Michael Weiner, University of California, San Francisco. "Hopefully there will not be a lot of abuse," he told Alzforum. "What we don't want to see is some for-profit imaging center starting to advertise 'Get your test for Alzheimer's disease here,' and making a lot of money off of it. That's not appropriate." It will be essential for a PET scan with Amyvid to be responsibly put in the context of additional neurological, psychological, and physical tests, as well as family history, to make an accurate diagnosis, he said.

In addition, more data will be needed to clarify the scan's credibility, said William Jagust, University of California, Berkeley. "We don't know what the false-negative and false-positive rates for this test are going to be," he told Alzforum, adding "It's not absolutely certain that a negative scan can rule out the presence of Alzheimer's disease." Jagust, too, emphasized the need to take all other clinical data into consideration when making a diagnosis, and not using a PET scan with Amyvid as a standalone diagnostic.

Skovronsky agreed, and looked toward implications for the future. "Hopefully now we are entering a new age, where we can evaluate patients not based on their symptoms, but based on the molecular pathology in their brain," he said. "We hope that will lead not just to improvements in evaluating patients, but to the generation of therapies that don't target symptoms, but target the molecular pathology."—Gwyneth Dickey Zakaib.