In the brains of people with Parkinson’s disease and dementia, both tau and α-synuclein often co-aggregate. This is no case of two independent inclusions forming side-by-side, but of one seeding the other, suggests a paper in the July 3 Cell. Virginia Lee and colleagues at the University of Pennsylvania in Philadelphia report that certain forms of α-synuclein fibrils seed tau aggregation in mouse neurons in culture and in the brains of mice. However, not all kinds of α-synuclein can corrupt tau, the scientists say. They identified two different strains—one seeds α-synuclein while the other seeds tau aggregation.

Researchers who spoke with Alzforum said the findings remind them of prions. Many were not surprised to see prion-like features emerging for α-synuclein, and suspected this study might be the first of many to find multiple strains for the proteins that aggregate in Alzheimer’s, Parkinson’s, Huntington’s, amyotrophic lateral sclerosis, and related diseases. Though aggregation-prone proteins such as α-synuclein are not infectious like traditional prions, accumulating evidence suggests that within a given organism, they transfer pathogenic misfolds to neighboring, normal proteins as prions do (see ARF News story on Irwin et al., 2013; ARF News story; ARF News story; ARF News story). “This paper is a milestone paper for the field. It is very impressive, very interesting, and very exciting,” commented Mathias Jucker of the University of Tübingen, in Germany, in an email to Alzforum. “The field always expected ‘proteopathic strains’ for proteins other than the typical prions…the suggested cross-seeding mechanism is a valid hypothesis.”

Lee and first author Jing Guo had reason to suspect they could seed tau aggregation with α-synuclein fibrils. The group previously showed that α-synuclein nucleates tau aggregation in vitro (see ARF News story on Giasson et al.,), and others reported that the same occurs in human embryonic kidney cells in culture (Waxman and Giasson, 2011).

Next, Guo had to figure out why most α-synuclein preparations didn’t work, but one did. She looked to the prion field, where proteins with the same amino acid sequence often exist in multiple misfolded conformations, or “strains.” A classic way for prions to morph from one strain into another is during repeated in-vitro seeding. Researchers take a bit of the prion and use it to seed aggregation of the normal protein in a new test tube. They repeat this process several times over, thereby “passaging” a small amount of protein from one tube to the next, and sometimes the strain type changes over these passages.

Guo passaged her own synuclein fibrils, taking five or 10 percent of one prep to seed the next, in succession. Early passage fibrils had no effect on tau when incubated with the mouse hippocampal neurons, but after five to seven repeated seed-and-transfer reactions, the synuclein caused tau to aggregate. Lee and Guo labeled the early-passage fibrils strain A, and the later ones strain B. In cells, strain A typically seeded aggregation of endogenous α-synuclein. Strain B, in contrast, seeded less α-synuclein than did strain A, preferentially seeding tau aggregation. “There may be subtle differences that account for some of the conformations recruiting tau, and some not,” Lee said.

In strain B-seeded neurons, α-synuclein and tau inclusions associated closely, as if α-synuclein templated the tau aggregation (see image below). Strain A was toxic to neurons, increasing lactate dehydrogenase release and reducing metabolism in the cells within two weeks of inoculation. Neurons treated with strain B remained healthy through 18 days. Lee suspects that the larger number of aggregates in strain A cultures contributed to their demise. 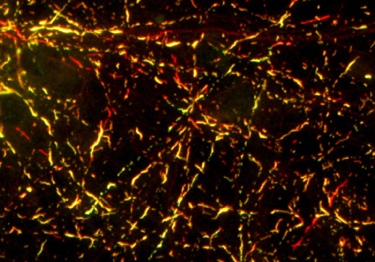 Sticking together: Mouse neurons seeded with α-synuclein strain B welled up with entwined α-synuclein (red) and tau (green) aggregates.Image courtesy of Virginia Lee, University of Pennsylvania School of Medicine, Philadelphia.

Next, Guo performed in vivo experiments, injecting each strain into the hippocampus of mice expressing mutant human tau. Normally these mice develop tau pathology around one year of age; Guo attempted to jump-start the process by injecting her strains into two- or three-month old animals. Three months after the injections, the strain A mice exhibited very few tau inclusions near the injection site. In contrast, tau aggregates appeared all over the hippocampus of mice injected with strain B. The scientists concluded that strain B α-synuclein seeded tau aggregation.

What differentiates strains A and B? Guo tried various methods to biochemically distinguish them. She discovered that they respond differently to digestion with proteinase K. Both generated five bands on a denaturing protein gel, with strain B yielding much more of the smallest fragment. That indicates strain B aggregates are less tightly bound and more easily digested, Lee said, suggesting that they are structurally different from strain A. The researchers also generated an antibody that appears to recognize strain B more strongly than strain A. That needs to be confirmed with purified preparations of the strains.

Could different a-synuclein strains exist in the human brain? In a preliminary experiment, the authors used proteinase K to digest α-synuclein from the brains of five people who had died of Parkinson’s disease dementia (PDD). Two had relatively “pure” cases of just PDD due to synucleinopathy. Three had both PDD and an Alzheimer’s diagnosis based on tau tangles and amyloid plaques. The researchers isolated detergent-soluble α-synuclein aggregates from the brains. Upon proteinase K digestion of these samples, the two “pure” PDD cases resulted in a single primary band, while the three combination cases yielded two. The results suggest to Lee and Guo that there are two variants of α-synuclein possible in the human brain, though they concede the sample size is too small for solid conclusions. Lee plans to examine more brains from cases of Parkinson’s, PDD or dementia with Lewy bodies (DLB) for further evidence of α-synuclein strains.

The possibility of there being multiple α-synuclein strains could answer a question that has long perplexed the field: why are brain pathologies and clinical symptoms so heterogeneous? For example, synucleinopathy may manifest as Parkinson’s disease, DLB, or multiple system atrophy. Perhaps the different clinical symptoms arise from slightly different strains, Lee suggested.

The prion field provides precedent for this theory, noted Claudio Soto of the University of Texas Medical School in Houston, who was not involved in the study. In the case of the original prion protein PrP, it causes different symptoms depending on which strain manifests. The same basic protein can create the ataxia and dementia of sporadic Creutzfeld-Jakob disease, the psychiatric symptoms of so-called “mad-cow” disease, or the sleeplessness of fatal familial insomnia, Soto said.

The cross-seeding also could explain mixed pathology. More than half of AD cases also exhibit α-synuclein Lewy bodies, and AD plaques and tangles often appear in the brains of people with synucleinopathies like PD or dementia with Lewy bodies (reviewed in Galpern and Lang, 2006. If certain forms of α-synuclein cross-seed tau, it could account for these mixed pathologies in some, but not all, cases.

“I thought this study was elegant and exciting,” commented Neil Cashman of the University of British Columbia in Vancouver, who was not involved in the work. However, he noted that it is very difficult to prove beyond any doubt that cross-seeding has occurred. There are always other possible explanations for why one aggregate leads to another. For example, the first type of aggregate may disrupt proteostasis or the protein degradation machinery, leading indirectly to aggregation of a second protein. Even so, the concept of cross-seeding has precedent; other researchers have suggested that some forms of amyloid can cross-seed ( Yan et al., 2007).

If researchers can learn to identify strains, they could use that information to categorize neurodegenerative diseases, the study authors suggest. For example, someday pathology might indicate a person had “synucleinopathy, strain type B” or a similar diagnosis. “This provides a reasonable approach for being able to differentiate these different syndromes on the basis of strains,” Cashman said.

Researchers who spoke with Alzforum said α-synuclein may not be the only protein that separates into strains. Amyloid-β, tau, huntingtin, SOD1, TDP-43 may also turn out to have many misfolded conformations, they suggested. In fact, researchers have already shown that tau from different human diseases causes different pathology when injected into mouse brains, suggesting the possibility of multiple strains (Clavaguera et al., 2013). Studies also suggest amyloid-β may differentiate into multiple strains (Nuallain et al., 2004). “There are going to be multiple strains in every [neurodegenerative] disorder,” Cashman predicted. “I think that will be the rule.”—Amber Dance.