Though excess amounts of α-synuclein have long been known to cause familial Parkinson disease and to characterize sporadic PD, what this protein actually does in individual neurons has remained a mystery. In a cell biology study published June 16 in the Journal of Neuroscience, researchers led by Subhojit Roy of the University of California, San Diego, propose that several-fold increases of α-synuclein can trigger a slew of pathological changes leading to synaptic dysfunction. The findings appear, at one level, consistent with a January Neuron paper in which Robert Edwards, University of California, San Francisco, and colleagues report waning synaptic transmission with modestly elevated α-synuclein (Nemani et al., 2010). Both studies suggest that a little extra synuclein causes big problems with transmitter release. However, the UCSD group describes this as one of many detriments of excess synuclein, whereas the UCSF team identified a highly specific defect in reclustering of synaptic vesicles with little else going wrong in their synuclein-overexpressing neurons. While these incompatibilities may stem from the studies’ different model systems and experimental approaches, the authors and others agree that both reports provide valuable clues—at a single-cell level in more physiologically relevant settings—about α-synuclein’s effects on the synaptic machinery.

The new studies try to bridge the gap by looking at what happens to neurons with modestly elevated (two- to threefold) α-synuclein. In the JNS paper, first author David Scott and colleagues made transgenic mice expressing low levels of human wild-type synuclein tagged with green fluorescent protein. These mice developed spatial memory problems by six months of age, and had about 2.5 times more α-synuclein than did wild-type littermates. To study the effects of excess α-synuclein on individual cells, the researchers cultured hippocampal neurons from transgenic mice “and followed the green glow over time,” Roy told ARF. “We were completely agnostic. We looked at them each week to see what was different [from hippocampal neurons of wild-type controls].” 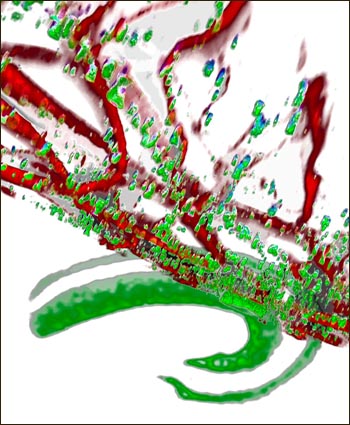 In the Neuron paper, first author Venu Nemani and colleagues also found reduced transmitter release resulting from mild overexpression of α-synuclein, but did not see most of the other α-synuclein-induced changes described by the UCSD group. Instead, by directly imaging the synaptic vesicle cycle in primary hippocampal neurons transfected with wild-type human α-synuclein to two- to threefold normal protein levels, the UCSF researchers reported a highly specific defect—recycling vesicles were failing to cluster near synaptic release sites. With help from UCSF colleague Roger Nicoll, the scientists found similarly reduced transmitter release in hippocampal slices of transgenic mice with threefold α-synuclein overexpression. Furthermore, culture experiments showed that the effect on transmitter release requires the N-terminal membrane-binding domain of α-synuclein.

Considering both papers, “the real issue is what α-synuclein is actually doing,” Edwards told ARF. “When you overexpress α-synuclein, does that produce a gain of its normal function? What [Roy] is arguing is that it produces a gain of its abnormal function. These are fundamentally different views.” This question should find resolution through ongoing analysis of knockout mice lacking all three α-synuclein isoforms. “If these animals show an increase in transmitter release, it would strongly suggest that the effects we observe involve a gain in the normal function of α-synuclein,” Edwards noted (see full comment below).

Roy finds the data of Edwards’s team “direct and convincing” and noted “it is possible that a “reclustering” defect is a major pathology induced by excess α-synuclein with additional smaller defects in other aspects of the synaptic machinery.” However, in light of the JNS data and prior α-synuclein studies in yeast and mice, along with well-known pleiotropic effects of other proteins implicated in neurodegeneration (e.g., tau, amyloid), “we favor the view that α-synuclein has diverse effects on the synaptic release apparatus,” Roy said.

Kostas Vekrellis, Biomedical Research Foundation of the Academy of Athens, Greece, thinks the different conclusions may derive from time and conformation of α-synuclein in the experimental systems used by the two recent studies. Roy’s team found pathological changes in cultured neurons with sustained α-synuclein expression (i.e., transgenic mice), whereas Edwards and colleagues examined neurons with shorter α-synuclein expression (i.e., transfection) and which did not seem to be aggregated, Vekrellis noted in an e-mail to ARF (see full comment below).

One issue the current studies leave unresolved is how impaired transmitter release might lead to Lewy body pathology or neurodegeneration. However, given that some of the most vulnerable neurons in PD are loaded with synaptic terminals and thus highly active, “it is not difficult to imagine that compromising the ability of these neurons to release transmitter might force them to work even harder than demanded by their normal role in brain, and that, after 50 or 60 years, they are left with axonal pathology (Galvin et al., 1999) and LBs,” wrote James Surmeier, Feinberg School of Medicine at Northwestern University, Chicago, Illinois, in a commentary accompanying the study by Edwards and colleagues (Surmeier, 2010).—Esther Landhuis