Meet the degu. Native to Chile, these highly social rodents develop pathological hallmarks of Alzheimer’s disease, including Aβ and tau deposits. Cognition also declines as these animals age, according to a report in the August 6 Proceedings of the National Academy of Sciences online. “We believe these animals could present an attractive model for studying sporadic Alzheimer’s disease,” Alfredo Kirkwood, a senior author on the study, told Alzforum. Kirkwood, from Johns Hopkins University, Baltimore, Maryland, collaborated with researchers led by Adrian Palacios, Universidad de Valparaíso, Chile, to characterize pathology in these guinea pig relatives. 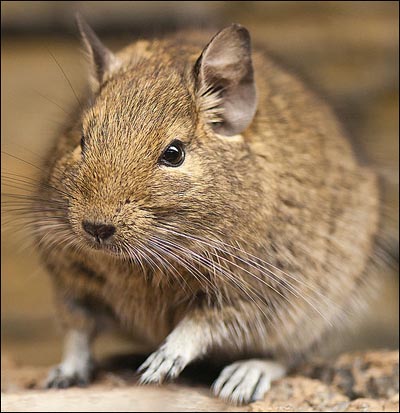 Transgenic mice are the model of choice for studying AD the world over, but, as Kirkwood pointed out, they more accurately model early onset familial AD rather than the late-onset form of the disease. “If you want to study sporadic AD or evaluate a therapy, you would want to use a natural model,” said Kirkwood. “Right now there is no other reasonable model than the degu,” he suggested. Other animals that naturally develop AD-like pathology include lemurs (Bons et al., 1994; Delacourte et al., 1995) and Caribbean vervets (Lemere et al., 2004).

Amyloid plaques began to appear in the degu cortex by 30 months, extending to the hippocampus by 60 months. While the researchers found soluble Aβ oligomers in both young and old degus, the levels rose as the animals aged. Between 12 and 36 months, the degu brain sprouted more Aβ hexamers and dodecamers than seen in young animals. Intriguingly, as soluble Aβ oligomers and phosphorylated tau accumulated in the animals, they began performing poorly in learning and memory tasks. Soluble Aβ and tau also correlated with synaptic losses.

Degus cannot match the rapid development of pathology seen in some transgenic mouse models of AD. That might make researchers think twice about using them for routine drug testing, for example. “It is true that you may have to wait longer to see any effects, but the advantage is you have a natural progression,” said Kirkwood. The researchers plan to test several interventions in their animal colony, including levetiracetam, an anti-epileptic drug that calms hyperactive neural networks in humans and reverses behavioral deficits—including memory loss—in AD mouse models (see ARF related news story).—Tom Fagan