Twelve years on, Jeff Ryan still recalls the collective gasp in the operating room the day he got the electrodes implanted. He himself was in somewhat of a state of shock as he held the cup. “All of the sudden your hands that have been shaking like crazy all your life, are just rock steady,” he recalled. The Iowan had had essential tremor since his teens, and was starting to have trouble managing his farm because of the trembling. Surgeons ran wires into his brain and hooked them up to a pacemaker-like neurostimulator implanted in his chest, which sends electrical signals to his brain that quiet the tremors. “It just changes your life dramatically,” Ryan told ARF.

It’s not just Ryan, and it’s not just tremor. On April 28 in the Lancet Neurology online, researchers from Queen Elizabeth Hospital in Birmingham, UK, report on behalf of the PD SURG Collaborative Group that deep-brain stimulation plus medication led to greater improvement in Parkinson disease symptoms than meds alone. This was a six-year, 13-center trial, the largest to date (Williams et al., 2010).

In this series, ARF takes stock of deep-brain stimulation after more than a decade of life-altering procedures. Now is an interesting time to learn more about this surgical treatment, because even as scientists are gathering long-term, broad-based data on its initial indications—movement disorders—they are beginning to explore whether DBS might also work for a range of other conditions, including Alzheimer’s.

Deep-brain stimulation (DBS for short) has been used to treat essential tremor and Parkinson disease tremors since 1997, when the FDA approved the therapy. More than 55,000 DBS devices have been implanted worldwide, many targeting the tremors and dyskinesias of Parkinson disease. Doctors say even more people could benefit from DBS. “It is underutilized, in my opinion,” said Jerrold Vitek, a movement disorder neurologist and leading DBS researcher, who co-chaired the Center for Neurological Restoration at the Cleveland Clinic until his present move to the University of Minnesota in Minneapolis-St. Paul.

Scientists are starting to gather data on the long-term effects of the treatment, on symptoms as well as quality of life. In the case of Parkinson’s, the effects of DBS can seem miraculous—but it is not a solution for all life’s ills, recipients and researchers find. Sometimes, once the tremors and dyskinesias have stopped, problems can arise in other aspects of a person’s life such as work or relationships (see Part 2 of this series).

Beyond PD, clinical trials are running for myriad targets. The specific site for DBS is based on imaging studies showing where, in a given condition, the brain is struggling. Therefore, any condition linked to altered brain activity in a particular spot is a potential candidate for DBS (see Part 3 of this series). Neurosurgeons implant tiny wires, usually carrying four electrodes each, into the appropriate brain area. In a second procedure, surgeons place a neurostimulator just beneath the skin, frequently below the collarbone. Wires under the skin connect the two implements. The neurostimulator can provide electrical signals that are strong or weak, fast or slow, depending on the person’s needs. Researchers hope to improve both the surgical process of DBS—making it safer—as well as the post-operative process of programming the neurostimulator to provide the ideal signals (see Part 4. 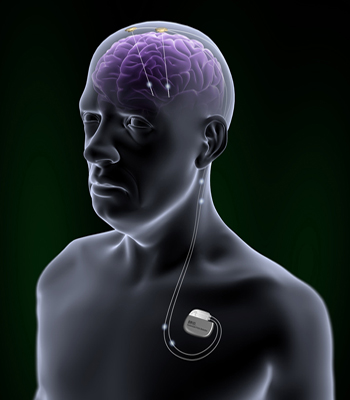 In deep-brain stimulation, a neurostimulator under the skin drives current to electrodes implanted into the brain. Image credit: St. Jude Medical

Optimizing Outcomes
In the most recent study of DBS outcomes, the Birmingham researchers and colleagues throughout the UK followed 366 people with advanced Parkinson disease (Williams et al., 2010). Half received DBS plus the best medical therapy available; the other half received only medical treatment. One year on, people who had surgery reported better mobility, ease in daily activities, and a drop in discomfort. People on the best medical therapy, in comparison, reported little change in their condition.

However, the scientists noted, DBS also led to more serious side effects, including 16 people who contracted infections at the surgery site, and one who died during the procedure. Because of the risks, the authors recommend that surgeons carefully select the people who are most likely to benefit from DBS.

Not everyone with Parkinson’s is a good candidate for DBS. Recipients must have had a PD diagnosis for at least five years to ensure they really have Parkinson’s. (Diagnostic accuracy for PD is low.) Surgeons generally restrict the treatment to people younger than 70, who they reason are best able to handle the risks of brain surgery and most likely to benefit from the chance to lead a more physically active life, said Elena Moro of Toronto Western Hospital in Ontario.

The people who respond best to surgery are those who already respond well to medication. Those people turn to DBS because the medication, after some years, often begins to cause uncomfortable side effects, such as the involuntary movements of dyskinesia, or because the medication wears off too quickly. For people who have taken PD meds such as levodopa for several years, life is a continuous cycle of “on” time, in which the drugs control symptoms well, and “off” time, when the medication wears off and they find themselves slow, trembling, even frozen in mid-movement. Peter and Barbara Higgs, both retired teachers in Workworth, Ontario, recall planning their outings and travels around the “on/off” cycle of Peter, who has Parkinson’s. Now “on” much of the time with his stimulator, Peter walked the 5K Parkinson SuperWalk in Peterborough, Ontario, last year. On average, people with DBS gain more than four hours of “on” time each day (see ARF related news story on Weaver et al., 2009).

However, people who do not find levodopa helpful may actually have a condition different from the “standard” Parkinson’s, such as dementia with Lewy bodies (DLB) or progressive supranuclear palsy, and the surgery is unlikely to help them. Some 15 percent of people with Parkinson’s meet the eligibility requirements for DBS, according to Moro.

Long follow-up studies show that even after five years—the maximum time yet published—DBS continues to support mobility. Among five people in a recent study of DBS recipients, subjects had nearly 60 percent less motor trouble while “off” medication than they did before the operation five years earlier. And the average dose of levodopa these people were taking dropped by half (Zabek et al., 2010). In another study of 49 people, researchers found similar improvements, although they also recorded some worsening of symptoms between the first and fifth year post-surgery (Krack et al., 2003). However, the authors noted that is to be expected from a progressive disease such as Parkinson’s.

Mysterious Ways
These outcomes are fairly impressive for a treatment that neither doctors nor scientists truly understand. DBS has its roots in chronic pain and tremor treatments of the 1970s, in which surgeons would simply destroy the area they thought was causing the problem. During the 1980s and 1990s, doctors found they could get similar effects by stimulating the area, a reversible treatment (Benabid et al., 1987; Benabid et al., 1991). “Maybe we excite cells with the high frequency, or maybe we change the pattern of discharge of these neurons, making them more normal,” Moro said. “Nobody really knows.”

Researchers also remain uncertain which brain region is the ideal target for Parkinson disease. In the majority of DBS operations, surgeons implant electrodes into the subthalamic nucleus (STN). This area is part of a circuit that connects dopamine production in the substantia nigra, commonly reduced in PD, to movement. Another part of this circuit is the globus pallidus internal segment (GPi), which also occasionally finds itself targeted by DBS. Each has its merits. The STN is easier to find in the brain and smaller, making it easier to place the electrode exactly where it belongs. But some scientists think that GPi stimulation minimizes side effects (Okun et al., 2009). Researchers are currently comparing the two regions directly in clinical studies.

The motor circuit that contains both the STN and GPi also feeds into non-motor functions. Therefore, DBS can have unintended consequences. Most side effects are mild; they include tingling in the limbs, slight paralysis, slurred speech, and loss of balance. They are often transient, occurring just after the stimulation turns on, or can be controlled by reducing the voltage delivered to the brain electrodes. Speech problems are of special concern, since some people with Parkinson’s already struggle to speak at a steady volume and enunciate words clearly. In a survey of 249 people with Parkinson’s, 99 of whom had had DBS, the nonprofit Parkinson Alliance found that speech dysfunction was a problem in both groups, but more so in the DBS subjects (Parkinson Alliance, 2009 [.pdf]).

Cognitive function and sleep are also areas of current interest, Moro said. In another Parkinson Alliance survey of 87 people with DBS and 76 without, the group found that people with DBS reported longer and less disturbed sleep (Parkinson Alliance, 2007 [.pdf]). As far as cognition is concerned, some DBS recipients show slightly reduced verbal fluency and vocabulary, working memory, and processing speed (Williams et al., 2010; Weaver et al., 2009). However, Moro said, these are decrements that come up on specific neuropsychological tests, and are unlikely to cause problems in a person’s day-to-day life.

“For a lot of people, it is just the simple everyday things that make the most difference,” Ryan said. Successful DBS could mean regaining the ability to shave, hold a glass full up to the brim, or toss a baseball to a child. Or even simply to express emotion, Peter Higgs said: “I can smile again.”—Amber Dance.