Perhaps nerve cells are simply neurotic about neatness. Perhaps they keel over when they get overloaded with junk? This view of Alzheimer disease draws support from two new papers highlighting the importance in AD of autophagy, a means by which cells dispose of unwanted proteins. In a study published online June 10 in Cell, New York University researchers with collaborators elsewhere report that the AD-linked protein presenilin-1 (PS1) is needed for lysosomal degradation during autophagy, and that pathogenic PS1 mutations stymie the process. The study identifies a novel function for PS1 that is critical for neuronal survival and does not necessarily depend on Aβ or amyloid, said principal investigator Ralph Nixon of the NYU-affiliated Nathan Kline Institute for Psychiatric Research. Instead, it has to do, surprisingly, with glycosylation of a proton pump. This study found its autophagy tie-in by examining neurons that lack, or have mutations in, an AD-related gene. The second study, published June 15 in PLoS ONE, also connects autophagy and AD but does so by looking at how deficiency of an autophagy regulator worsens AD pathology. In that study, Tony Wyss-Coray of Stanford University, Palo Alto, California, and colleagues report that beclin-1 regulates turnover of amyloid precursor protein (APP), the source of the toxic Aβ peptides littering AD brains.

Prior immunolabeling and electron microscopy studies by the Nixon lab suggested that autophagy revs up in AD (Nixon et al., 2005) and leads to increased Aβ production (Yu et al., 2005). The researchers made the leap to look at presenilins based on immunocytochemistry studies that revealed full-length PS1 and PS2 in the endoplasmic reticulum (Zhang et al., 1998), where the proteins have been proposed to serve as ion channels (Tu et al., 2006 and ARF related news story). Figuring the ER was important for formation of autophagosomes during autophagy, “we had a hunch that if PS1 were involved at all in the lysosomal system, it might be doing something in the ER, and that pathogenic PS1 mutations might somehow enhance the disturbance in the lysosomal system,” Nixon told ARF. Earlier work from his lab showed enhanced lysosomal pathology in neurons with familial AD-linked PS1 mutations, compared to cells from sporadic AD cases (Cataldo et al., 2004). “That established the pathological basis for then going back into the cells and asking what happens if we knock out presenilin-1?” Nixon said.

Using metabolic labeling methods to analyze blastocysts from wild-type or PS1 knockout mice, first author Ju-Hyun Lee and colleagues found that PS1-deficient cells had decreased autophagic turnover of long-lived proteins. The defect was specific, as synthesis and degradation of short-lived proteins seemed fine without PS1. Ultrastructural analyses confirmed that autophagy had gone awry in PS1-deficient cells. Similar to their previous analyses of autopsy tissue from AD patients, PS1-deficient neurons were stalled in the earlier stages of autophagy—i.e., crammed with more autophagosomes and early autolysosomes—whereas most of the intermediate autophagic vesicles in wild-type cells were late autolysosomes. From there, the researchers worked backward, systematically examining step after step in the autophagy process, to figure out what was causing autophagy to lag in the absence of PS1. 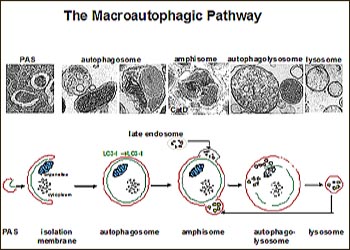 The early steps of autophagy looked normal in the PS1 knockout cells. “We could write off everything that is involved in the signaling and in the formation of the autophagosome, and even in the fusion with the lysosome. That simplified our task,” Nixon said. Focusing then on what happens after autophagosome and lysosome have fused, the researchers did several critical experiments. First, using dyes that selectively immunolabel the active form of cathepsins D and B, they saw that the lysosomal proteases were present but largely inactive in PS1-deficient cells. Second, their studies with LysoTracker, an indicator that lights up in acidic compartments, pointed the finger at pH as the culprit for the proteolysis defects in PS1-deficient cells. When LysoTracker did not fluoresce in structures clearly identified as lysosomes based on presence of cathepsins or other markers, the only explanation was that the pH is off without PS1, Nixon said. The scientists saw these same defects in fibroblasts from AD patients with pathogenic PS1 mutations. Furthermore, they found support for their hunch about the pH problem when they were able to make wild-type cells look just as autophagy-challenged as PS1-knockout cells by neutralizing the pH with ammonium chloride or bafilomycin A1.

Bafilomycin A1 is an inhibitor of the proton pump (v-ATPase) that acidifies the lysosome. And as luck would have it, the proton pump was the scientists’ first guess as to what might be going wrong in the absence of PS1, Nixon said. Immunostaining PS1 knockout cells, he and colleagues saw that the bulk of v-ATPase had not yet made it into lysosomes but was still in the ER. Subfractionation experiments verified the ER localization and yielded another important piece of the puzzle: the ER v-ATPase was unglycosylated, whereas most of the v-ATPase in wild-type cells occurs in glycosylated form largely in lysosomes. The suspicion that cells without PS1 were failing to glycosylate v-ATPase gained strength when biochemical experiments showed PS1 co-immunoprecipitating with all the relevant players to glycosylate v-ATPase. “When we found that part of the complex included the oligosaccharyl transferase, the mechanism was clear,” Nixon said. “That complex mediates glycosylation of the v-ATPase, which is required for its delivery to the lysosome. Without PS1, the v-ATPase remains unglycosylated and stuck in the ER.”

Presenilin aficionados may find it intriguing that the glycosylation complex contained full-length PS1—not the cleaved form found in γ-secretase, the enzymatic complex that helps cut Aβ out of APP. But the biggest news to the AD field is that the PS1 mutations “directly affect a function that is critical for cell survival—namely, lysosomal function,” Nixon said. “That in itself, regardless of whatever else Aβ may be doing, may be enough to account for the profound increase in aggressiveness of PS forms of familial AD compared with sporadic forms.”

The findings offer a fresh look at the autophagy/lysosomal process, whereas previous studies have primarily connected these pathways with γ-secretase or Aβ. For example, in the April issue of the journal Autophagy, researchers led by Toshiyuki Nakagawa, Gifu University School of Medicine, Japan, propose that the autophagy-lysosomal system modulates γ-secretase activity through GCN2 (general control nonderepressible 2), and that cells lacking Atg5 (a gene in the autophagy pathway) rack up more Aβ (Ohta et al., 2010). The data seem consistent with prior studies showing increased neurodegeneration in Atg5 knockout mice (Hara et al., 2006 and ARF related news story). The authors and others believe the new studies should stir interest in targeting autophagic/lysosomal pathways for AD therapeutics (see Jaeger, Masliah, and Nakagawa comments below).

Recent work has fingered another autophagy regulator, beclin-1, in worsening of AD pathology. Wyss-Coray and colleagues reported in 2008 that beclin-1 levels are reduced in AD brains, and that AD transgenic mice on a beclin-1 heterozygote background had more Aβ deposition and synaptic abnormalities than AD mice with wild-type beclin-1 (Pickford et al., 2008 and ARF related news story). That study “made a link among AD, amyloidosis, and autophagy. We now provide a cell biology rationale as to why that might be the case,” Wyss-Coray said of the work his team reports today in PLoS ONE.

In the current study, first author Philipp Jaeger and colleagues knocked down beclin-1 in cell culture, and as a consequence, detected more full-length APP, APP C-terminal fragments, and extracellular Aβ. “You basically get accumulation of all APP fragments, which strongly suggests APP is targeted to the autophagosomal pathway,” Wyss-Coray said. In line with this, lentiviral overexpression of beclin-1 reduced APP levels in transduced CHO/hAPP cells.

In frontal cortex samples from AD patients, relative to age-matched healthy tissue, the researchers found that lower beclin-1 levels corresponded to a similar drop in the protein VPS34 (aka PIK3C3, for class 3 phosphoinositide-3-kinase). VPS34 along with beclin-1 and other proteins form a complex that initiates autophagy. In the same AD brains, the researchers found that levels of the autophagy protein Atg5 were unchanged, suggesting that only parts of the autophagy pathway are dysregulated in AD.

All told, the Stanford group provides evidence to suggest beclin-1 deficiency may not only keep the autophagy process from getting started, but also block later degradation of autophagosomes. “This is where our two stories come together,” Wyss-Coray said, referring to his and Nixon’s studies (see full comment below). “We basically get the same phenotype as you get with PS1 deficiency or mutations. There is a stall somewhere in the autophagosomes’ fusion with lysosomes, such that APP is hanging around in the cell much longer and cannot be degraded.”

This could result from problems when autophagosomes form, which happens early in the autophagy process with the help of beclin-1. However, the stalling could also reflect interference with beclin-dependent late endosome functions. Disturbances at this step are known to disrupt the forming of amphisomes (i.e., fusion of autophagosome and endosome) and their clearance through autophagy (Filimonenko et al., 2007), Nixon noted (see full comment below).—Esther Landhuis